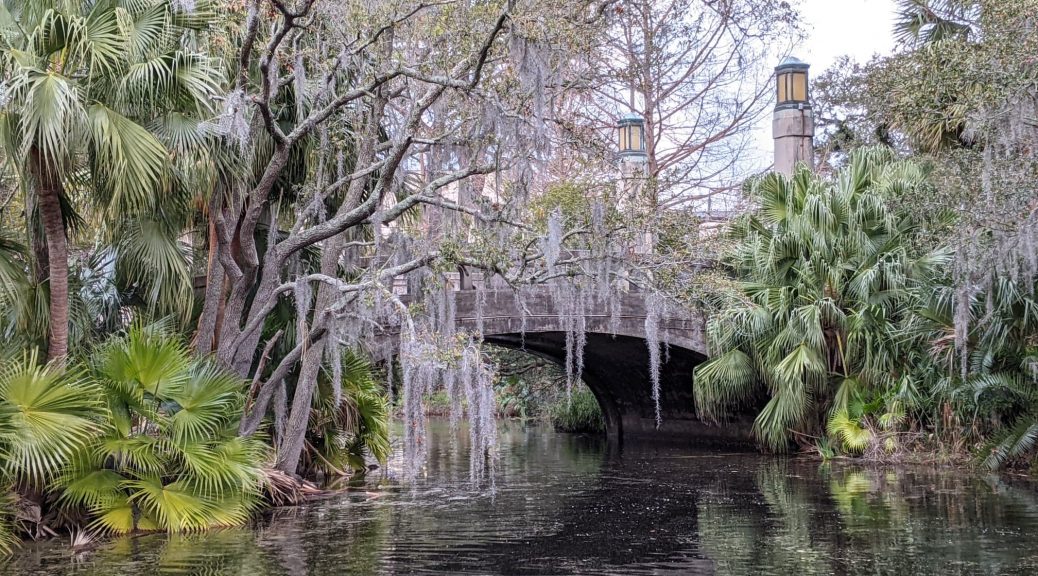 We headed out in a light rain and after a few hours we were at our home for the next two nights. A Brewery called Fort Bayou Brewing Company. They had a large parking lot out back and several RV’s were already there. They were in a great location with all kinds of stores that we needed. We bought some groceries, dropped by Camping World and filled up our LP tank. We even got a mattress topper at Target for our bed! We are now truly sleeping in the lap of luxury. Like I said before these sites are free but it is suggested that you spend about $25 at the business. We bought dinner there each night and was able to bring it back to the camper each night. The reason we spent two days there is because it was supposed to rain in New Orleans on Saturday and be clear on Sunday. Since we were planning on biking around New Orleans we needed to have decent weather. So on Sunday we headed down the beach towards New Orleans. In about 2.5 hours we were actually driving in the French quarter. Our RV is small but I would be lying if I said it was completely stress free. We are about 21 feet long and 8 feet wide which is pretty small in the RV world but kind of big going down one way streets in New Orleans. In fact I can say we saw say no other RV’s attempting this. Every time we turned a corner we got some pretty fun stares with the occasional thumbs up or a peace sign.

Finally we found a place to park and went to get some Beignets and coffee from the famous Cafe Du Monde. I got some from the take away window and we ate them in the park across the street. I even gave Jasper a few big balls of powdered sugar and of course he loved it. By the end of it all three of us had white powder all over our faces and looked like we were ready to be admitted to rehab. I had read that we might be able to park at the City Park (NOMA) which was about 15 minutes north of the French Quarter. Our plan was to go check it out then ride back down on our electric bike and take a look around Bourbon Street. The park was way more awesome than I could have ever imagined. It was stunningly beautiful with trees, canals and small groups of people enjoying themselves….. oh and there was a super nice Cafe Du Monde right in the park. At the back of the park was the New Orleans Museum of Art. (NOMA) Any way when we pulled in we saw two vans and a schoolie. One of the guys said he had been camping there for 5 days without any issue. Cool Beans we had found our home for the night! After walking Jasper we took the bike back downtown and just enjoyed riding around. We bought a catfish PoBoy at NOLA PoBoy’s and brought it home with us for a late lunch. After lunch we walked around the park and saw so many cool things. People were kayaking, paddle boarding, canoeing and there was even once couple riding in a gondola. After a good look at everything we headed back to the camper for the night.

When we got back we noticed that several of the vans were plugged into outlets in the park and not wanting to be outdone we grabbed our extension cord and discreetly put it out the front window and through a bush and into the outlet. Wow a free place to stay and electricity…… awesomeness!!!! By now it was dark and its was about time to settle in for the night. No sooner did this feeling of thankfulness come over me that our entire RV filled up with blue flashing lights!!!! Lyn literally yells I think the PO PO is outside. You don’t say ha ha….. was it the blue disco lights inside our camper or the fact that the only thing we could see out the window was a police car?!?!?! (Ha ha maybe one too many Madea movies.) That was one of the first movies I watched with Lyn when she came here from Singapore. Anyway the knock on the door came just a few seconds later and its funny what goes through your mind at this point. Should I plead the 5th?!?!? Should I ask for a lawyer??!?!? Should I refuse to talk at all?!??! Well while all of those are viable options I just said “Hey how are y’all doin!” They said they were fine and asked how we were? Ahh off to a good start but then they handed me a piece of paper with a highlighted section. More crazy thoughts….should I touch it?!?!? Are they trying to get my DNA and or fingerprints??!?!?! I think Lyn watching all of these crazy crime mysteries over the years has my head totally messed up. Anyway I took the paper and it said no camping overnight. So actually I told him that I thought I could stay and he did say that they sometimes overlook it but that it was just too many of us on this night. So I said can we stay til the park closes and he said the park closed 30 minutes ago. Drats my master plan of gaining more time did not work. So I did what every good husband would do… I sent Lyn climbing out the front of the rv through the bushes to unplug us from the outlet then we did what most fugitives do in times of peril we started heading West and in search of a Cracker Barrel! Luckily in a few hours we found one with a very nice owner that said we could stay. Tomorrow we are going to try to make it to Magnolia Beach Texas for some more of this great “free” camping. As usual…thanks for reading.