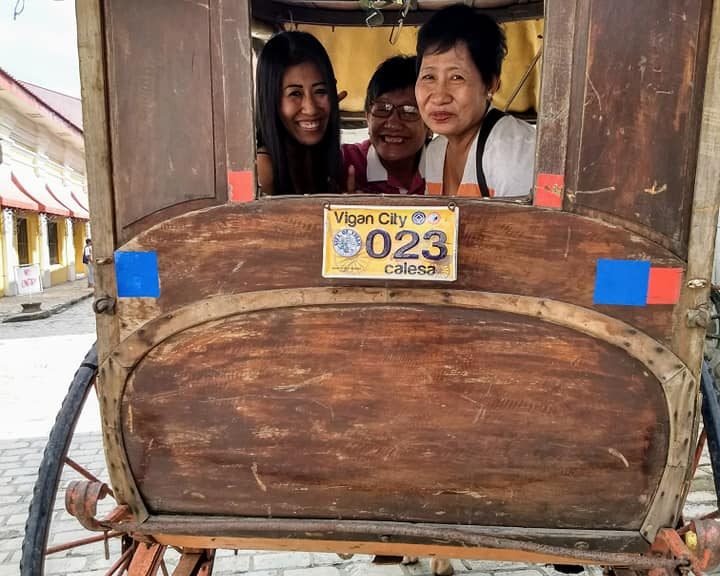 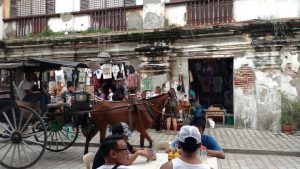 Lyn and I are finally sleeping til about 6 AM just about every morning! It feels great to be on local time and to be honest I am surprised it took us this long. Anyway we woke up at 6 and decided to go for our morning walk and check out the area surrounding our hotel. As you know by now I love watching a town wake up and Vigan was no different. As we walked the cobblestone street of Calle Crisologo we saw families catching tricycles with their suitcases probably heading to the bus station to go back home. We also saw families being dropped off with their luggage as well. Probably just arrived on an overnight bus and were hoping for an early check-in. We saw store keepers sweeping in front of their stores as well as people having cups of coffee and enjoying the start of their day. We walked out of our area and into the 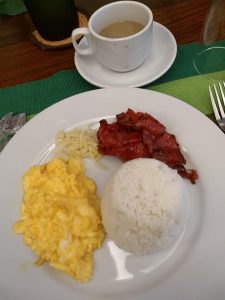 busier parts of town and really just took it all in. It’s always funny to me when I see all of these iconic views that I had seen when I researched the cities for us to visit on this trip. It kind of feels surreal to actually be here in person after seeing it all on-line time and time again. Anyway after about an hour we headed back to see if Lyn’s sisters, Modesta and Dominga were ready to get breakfast.

When we arrived back at the room they were up and ready to go. They were excited about this day as well. They had never been this far north in the Philippines but of course knew that Vigan was a great place to visit. We went down to the dining area and the unlimited coffee flowed while we gave the waiter our room number so they could match it up with the orders we had placed the night before. While we ate breakfast we made a plan for the day. One of the cool things about Vigan is that most of the attractions are pretty close together so you can easily tour them by tricycle or horse-drawn carriage.  These horse drawn carriages are known as Calesa’s (aka Kalesa) and where introduced by the Spanish in the 17 hundreds.I actually talked to the front desk and asked them about the carriage rides and they highly recommended them. They said that the drivers could take you to the main attractions, tell you about the attractions and take your pictures along the way. She went on to say that if they went and saw everything, it would take about three hours and the price would only be about $3 per hour for the driver 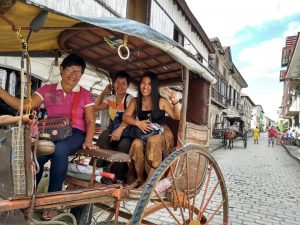 and carriage. She said we could all fit in one carriage but we could take two if we wanted. I could see that she was eyeing my size when she made that last statement ha ha. I am about 6 feet tall and weigh about 205 pounds which puts me in Ogre category here in the beautiful world of the Philippines. I feel a little bit like Shrek when I get in and out of tricycles as well as just walking amongst the people.

After hearing all of that I decided to stay back and work on the blog while Lyn and her sisters did the big tour. I needed to catch up on the blog and I also thought it might be nice for them to spend some alone time together, something that they probably have not done in over 30 years. Finally I just did not want to put that horse through carrying my Shrek size butt around. 🙂 I had already walked past many carriages and each time I felt like the horse gave an audible sound of relief as I passed on by ignoring the drivers pleas for me to take a ride. Once the plan was set Lyn, Modesta and Dominga headed out to find their carriage. Lyn said that Dominga wanted a white horse so after 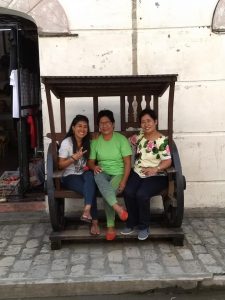 breakfast they headed out to find their carriage and driver who would be theirs for the next 3 hours or so.

I went back to the room and started getting caught up on the blog while enjoying the rooms powerful air conditioning! Ahhhh super nice!!! About 15 minutes in I started to hear a jack hammer right outside our hotel window. As I looked out I could see that he was trying to break through the cobblestone with a jack hammer and the only time he would stop was when it was someone else’s turn to takeover. This was in no way the hotels fault it was just bad timing. Anyway I decided that the air conditioning of our room along with Internet access was worth putting up with the construction sound. After about three hours Lyn and her sisters came back with big smiles and a look on their faces like they had really had a good time. After they arrived it was time for lunch and I had been put in charge of finding us a lunch place. Several people had told us that we had to try the Empanadas here and I found a place on-line that was called Irene’s Empanadas. It was about two blocks from the hotel and literally was a hole in the wall. We all walked down the street and after seeing the menu we ordered several items including their 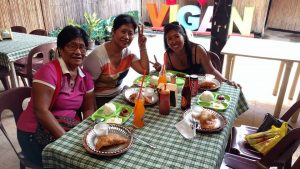 famous empanadas. The one thing I was looking forward to was having a beer with my empanadas.(Surprise surprise!) Surprisingly they did not sell beer here. The waitress said if I wanted a beer I could buy one at the store across the street and just bring it in the restaurant. Problem solved. (I love how care free it is over here.) Once our food came we all dug in and enjoyed every bit of it. I do not think we left a single bite on any of our plates.

After lunch Modesta and Dominga decided to take a nap and Lyn excitedly told me about their morning carriage tour. Lyn said that they 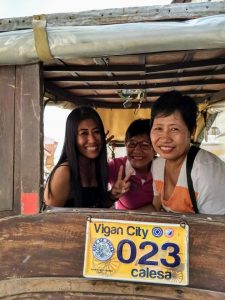 found a driver with a white horse pretty much right away. They negotiated a price of 150 pesos per hour. (That’s about $2.83 per hour.) He told them that he would take them to all of the main attractions and wait on them while they toured the attractions. So off they went and as a bonus he gave a history of the city while they traveled along. Lyn said they went to about 7 places in all. Some of the places they went were free and some had small admission fees. If it was free the driver went in with them and took their pictures. They saw so many places and really had a great time with each other. At one point Lyn’s sisters just burst out with tears of joy for being able to experience this with Lyn by their side and all believed that their parents presence was with them as they traveled through these sites together. They all three also had a great time buying souvenirs at almost every location. (We may need another suitcase!)

After hearing about it and seeing all of the pictures I was so glad that they had the chance to see this beautiful city together! Since Modesta and Dominga where napping Lyn and I went out and retraced a few of the places that they had been on their tour. We also wanted to find out where the town fountain 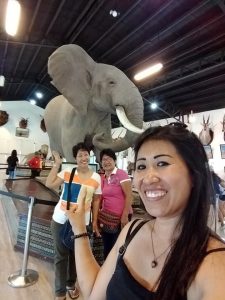 was. Everyone kept telling us that we had to see the fountain at night. Apparently there was a show that was complete with lights and music and after checking it out online I really thought we should see it. As it turns out it was in the towns square about a 10 minute walk from our hotel. The show was supposed to start at 7:30 and last about 30 minutes. It did say that the show happened every night unless it rained. Over the last two days the rain pretty much started about 6:30. We decided to go and take our chances. We also had heard that if you wanted seats you better go about 30 minutes before the show. We headed about  6:45 and when we got there plenty of seats still remained. The weather was holding up for the time being so we were hopeful we would get to see the show. As we sat there rain clouds started forming off in the distance. This was going to be close. At about 7:35 the fountain show started and I will have to admit we were all blown away. It was much more than expected and song after song the fountain went in tune with each song while changing colors in time to the music. You can see a short video of the fountain by clicking here. Finally about 8:00 during the last song the rain finally started coming down. We all scurried with the rest of the crowd and went to a restaurant about a block from our hotel. As we ordered dinner the waiter asked if 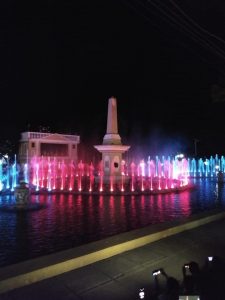 we would like to go ahead and order dessert. Hmmm they really want you to order ahead of time here. Anyway it was a family restaurant and we had the cutest little girls watching our table the entire time we ate our dinner. As it turns out we were too full for dessert and waddled back to our hotel and called it a night. You can view a short video by clicking here of us walking back to the hotel.

Tomorrow we are heading to Laoag. It’s about two hours further north. We had heard that the busses ran every hour on the hour but you could not buy your tickets ahead of time. The reason you could not buy them ahead of time is  most of the busses originate in Manila and people continually get on and off the busses along the way so there was no telling how full the bus would be when it arrived in Vigan. The plan was to go to the bus station around 9:30 and just see what happens. We really enjoyed this place and will be back for sure. Thanks for reading!