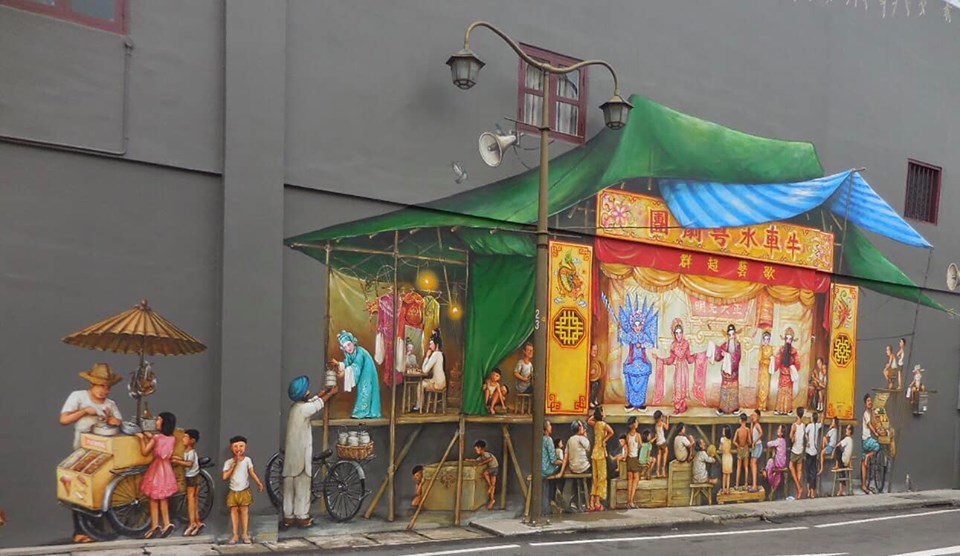 So now that Julie is here we are officially Three Miles from Home!!!! Ha Ha. So the plan for today is to meet up at 9 AM and head out on the town. Julie agreed to this time even-though she just arrived around midnight the night before. Tessie, Lyn’s cousin who lives here 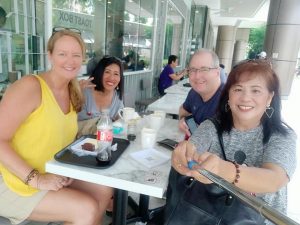 came to our hotel just before 9 and as promised Julie was up and ready to go! She was in full on vacation mode with no signs of traveling half way around the world the day before. We headed out to breakfast which was about 15 minute walk away. As expected it was already hot so we just walked slow and made our way to the Toast Box for breakfast. Our hotel is in the middle of Little India and as you can imagine it truly feels like you are walking through a small part of India. Love love love all of the smells, sights, colors and the people. In about 15 minutes we got to the restaurant and ordered Kaya Toast which came with two soft boiled eggs. Kaya Toast is toast with coconut jam and butter and after breaking up your eggs in a bowl you dip the toast in the eggs. Yum yum!

We road the MRT down to Chinatown. We needed to buy Julie a 3 day Transit pass and the first place we went was closed but one of the people working there said we could buy it at the next station in Chinatown. So we bought Julie a one way ticket to Chinatown and when we arrived the office said “Back in 10 minutes”. No problem. Everybody went to the bathroom while I waited in line. After a few minutes I had a line behind me and all of us 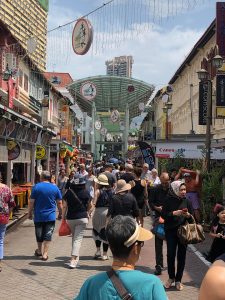 thinking it should open any minute. After 20 minutes we still had no one at the window. Finally when we were all about to leave this old man walks to the front of the line with two rolling suitcases and bangs on the window that had a shade drawn. Even-though he could not see anyone and could clearly see the sign saying back in 10 minutes. He yells “break done already! Get back to work. No longer break time lah!” As soon as he said that the shade comes up and the person sells him his tickets. Problem solved ha ha! Love it!

One thing I love about riding the subway and popping up at your destination.  In Chinatown when you pop up you are in the thick of it and it is awesome. It is busy, chaotic and beautiful all at the same time! We wanted to go to a temple first and then just walk the streets of Chinatown to take it all in.The temple we were going to was called Buddha Tooth Relic Temple and Museum. It is said that it actually houses one of Buddhas actual teeth. We went in and were totally blown away. I cannot even describe the beauty of it. I will let the pictures do the talking. There are thousands of Buddhas of all sizes and 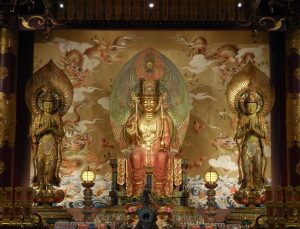 designs. This temple was built in 2005 at a cost of over 60 million dollars. After touring that we we hit the streets of Chinatown. The streets were filled with gift shops and yummy smells of food every where. We ended up at a hawkers stand and shared chicken, rice, soup and vegetables.

After that we planned to go meet some of Lyn’s friends at Lucky Plaza which is a mall that a lot of Filipinos go to especially on Sunday since that’s is their day off. Julie and I already felt tall in Singapore but Lucky Plaza took it to a new level. As we went down the aisles there was rarely anyone taller than our shoulders. We felt like giants surrounded by very friendly people. People would stare at us and then look away as soon as we made eye contact. It 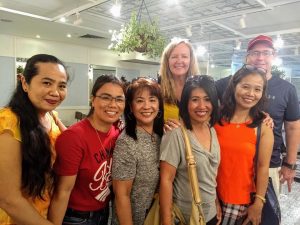 made us feel kind of famous ha ha. Anyway after running into a few friends we made it into a Toast Box again and we all got some coffee.  Some friends were already there and others came later in the day. We were there about 2.5 hours and I feel I am not exaggerating to say that 100’s of pictures were taken.

After that we decided to go to Lau Pa Sat. This is a famous Hawkers food center that is in the downtown area of Singapore. You grab a table outside and then go pick the food you want from all the vendors that they have. Then everyone comes back with their food and has a big picnic. It was awesome and while it was still hot it felt great now that the sun had gone down. We 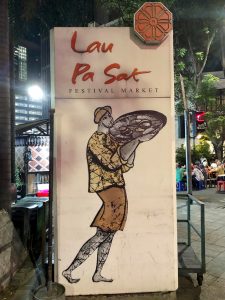 had all kinds of dishes and while we were eating you could smell all the food being grilled around you. It was awesome in just about every way.

After dinner Tessie decided to call it a night and head home. We had one more thing on our agenda. We wanted to see the light show down at Marina Bay. It was only about a 20 minute walk which would give us plenty of time and allow us to walk off a few of the calories we have been eating. We have been going all day and Julie has showed no signs of jet lag. Lyn and I have been amazed at this. We got there and found people sitting down in front of the hotel waiting for the show to start. At exactly 9 PM in true Singapore fashion the show started. Music started playing and the fountain water started to dance and all types of lasers and multiple colors where being projected everywhere. While all this was 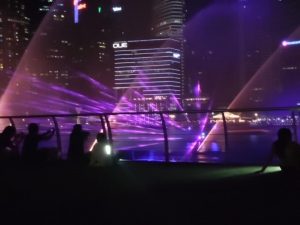 going on they some how sprayed a wall of misty water that they used as a screen to project lasers on to create a story. It was like being at an outdoor movie but the screen was all made out of water. The pictures do not really do it justice  but at least you can get the idea. You can see it for yourself by clicking here.The show was about 15 minutes long and then we cut through the the shops at the Marina Bay Sands hotel and found the MRT for our ride home. After a couple of stops we were home and worn out but what a day. Can we get up and do it again tomorrow?!?!??! Can can lah………plans have already!!!!! (In my my best Singlish accent.) As usual Thanks for reading and coming along with us!