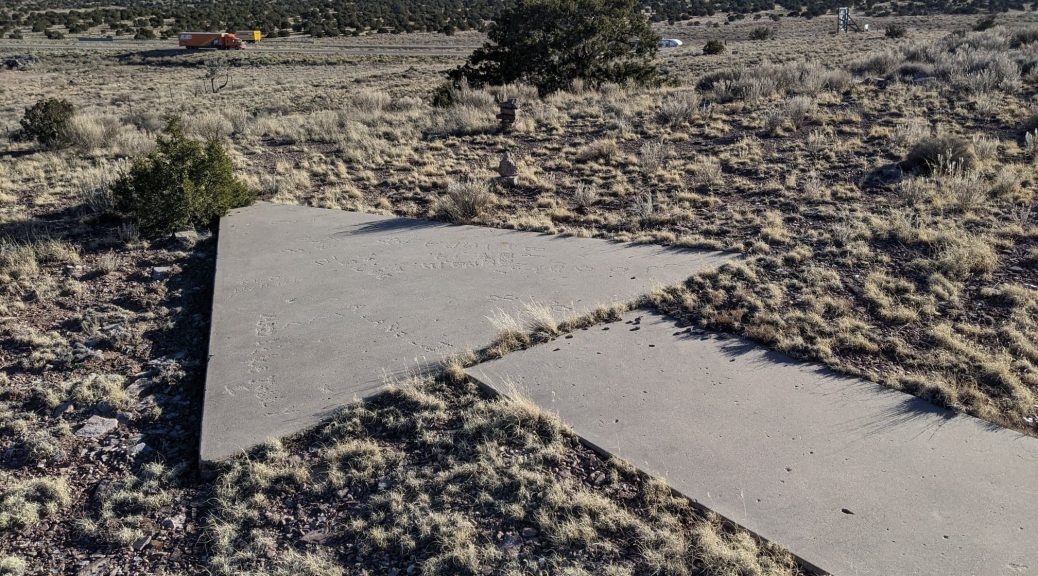 We woke up at the Valley of Fires Campground and just enjoyed the start of the day. About midmorning we dumped our tanks added a little fresh water and were on our way. We were headed Northwest to a town called Prewitt. It is a very small town about an hour west of Albuqurque. I was told that there was a Navigational Arrow there that was in pretty good shape and I wanted to see it. About a month ago I read about these arrows that were used to deliver airmail from New York to Los Angeles and other major cities. The arrows were made of concrete and about the size of a a Mac truck. A lot of the arrows had beacons that would shine brightly like a light house and help guide the pilots to their next destination. Of course in the 20’s radar and GPS where non existent. So the pilots delivering mail across the country would literally look out their window and be guided by these arrows. The arrows helped them get to major cities as well as avoid things like mountain peaks. So as I learned about this my mind was already blown but then I found out that they were built about every 5 to 6 miles. Can you imagine every 5 to 6 miles from one end of our country to the other there were arrows placed as a road map for these pilots. Anyway in World War II a lot of the beacons were torn down to use the metal for the war effort. Even some of the arrows were torn up as well. It is said that their was a meeting discussing the possibility of an invasion by Germany or Japan and somebody stood up and said “you do realize that we have big arrows all across the country pointing towards our major cities. right?!?!?” So in an effort to protect the USA from a potential attack some of them were removed. Anyway because so many were built there are still a lot of them left today even and some still have their beacon tower. A lot of them are on private land or so remote you cannot easily get to to them.

Prewitt however had one right off of I-40 and according to Google maps it looked to be in pretty good shape. I decided I had to see it for myself. After about 5 hours of driving we arrived in Prewitt. There was a rundown bar and about 4 houses and that was about it. I parked the RV at the bottom of a small hill and took my drone with me so I could fly over it and kind of see what the pilots might have seen back in the day. As I climbed the hill my anticipation grew and finally I could see it in all of its beauty. This may just look like an old piece of concrete to some but to me it was a big part of our past and the next thing I knew I was standing on the arrow that was close to 100 years old. The beacon tower was long gone but you could see where it had been attached. I was excited but also a little worried that someone would come along and tell me to get off this hill top. So I quickly set up my drone and did a few fly overs to capture it and then climbed back down the hill and drove away. You can see the drone footage by clicking here. Even though the one was easy to get to I felt like I had found a treasure and was grinning from ear to ear.  Lyn stayed with the RV so she could move it if someone came along. Now she had to listen to me babble on about how cool it was. Also it was not lost on me that I had just flown a drone that totally uses satellites and GPS coordinates to safely fly and return to the exact location that it left. Meanwhile about 100 years ago pilots were wiping their eyes and squinting trying to find their way.

After Prewitt we headed for our campsite for the night. It was at Joe Skeen Campground in El Maps National Conservation Area and it was bout 45 minutes away. You can see a short video of our campsite by clicking here. As we were headed there we saw a small airport that had a preserved Navigational Arrow with beacon that they had turned into a museum. It was late now so we decided to go camp for the night and then visit the museum the next day and learn more about this part of history. We drove through some really beautiful area and eventually turned into our campground. It was huge and only had about 12 sites in it. We drove around picked the site we wanted and headed back to pay. We found out it was free. Wow this is crazy. They did take donations so we left a small donation and went back up to our chosen campsite. The site was big and had a huge covered picnic table and a grill. We did not have any wood so we lit some charcoal in the fire circle and roasted marshmallows as the sun was setting. To say I enjoyed today would be an understatement for sure. Lyn fixed a great dinner and I am so thankful to have her easy going personality and patience as I drag her all over this beautiful country of ours.

The next morning we headed back to the New Mexico Aviation Heritage Museum. They had moved this one from its original location about 6 miles away and have restored it to its original condition. They were closed but the entire museum was outside. It was complete with the arrow, the beacon and even the shed that housed the generator that ran the beacon. The generator was made by Kohler which is the same brand as the nonworking generator in our RV. 🙂 You can see a short video of me touring the place by clicking here. Anyway after learning more about these cool artifacts we headed towards Petroglyph National Monument. As we were driving there it was time for lunch and we saw a place that said fried Indian bread so we stopped in for a look. They had tacos made with fried bread and also fried bread with powdered sugar on it. We bought one of each and ate them in our RV. Kind of like eating food from a fair. It was good but we were a little lazy eyed by the end of our meal. We headed on and ended up at the Petroglyph National Monument and by now it was a little late in the day. We need to go back to this park for sure and give it a better look. We took a quick look around and started heading to our campsite for the night. The entire time we were driving on I-40 there have been many opportunities to take an exit and see parts of the old Route 66. One of these was something called the “Singing Road”. It was a piece of road that if you got your tires lined up just right and where going about 45 MPH you would hear the tune of America The Beautiful. You had to line your tires just to the inside of the white line on the passenger side. Much too our amazement we actually heard a few notes on our first try. We tried three more times to get a longer segment but never did here a note again. Pretty cool and frustrating all at the same time. We headed towards our campsite that was about 30  miles east of Albuqurque.

This would be free dispersed camping along I-40. According to the reviews on I-overlander You would drive about 2.5 miles down a dirt road and come to a blue gate that would be unlocked and you could let yourself in but you had to make sure you closed the gate. Sure enough after driving down the road we came across a blue gate and to our left was a corral area with one other RV. I got out and opened the gate and we drove through then I closed the gate and before I could get back in the RV I saw Big Mac trucks coming towards us on the dirt road. I pulled off on the side hoping I would not get stuck in the loose dirt. After they passed we went in and settled in for the night. We could hear I-40 faintly in the distance and when we peeked outside we could see a sky full of stars. Lyn fixed another awesome dinner and we sat down to plan our trip home to meet our newest Granddaughter Nora. I thought it would be fun to follow Route 66  when we could and see some of the quirky roadside attractions. We checked the weather in Armarillo and it was about the same as we were in Albuqurque but when I did the 10 day forecast we noticed that the next night there would be 6 degrees! Yikes! We were a little shocked by this and then we learned that the entire state of Texas was about to be hit by a huge winter 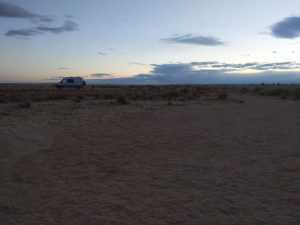 storm. We needed to make a quick plan to figure out a way to ride this out. Going west was not an option so we decided to go south and head for the coast to hopefully find warmer weather. To be continued……….. ✌️😁🌵