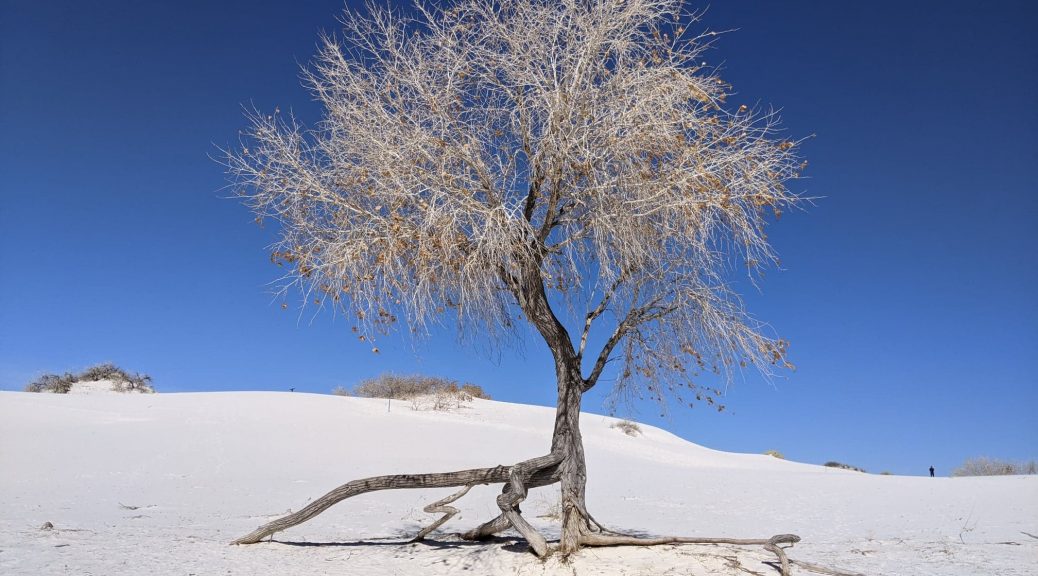 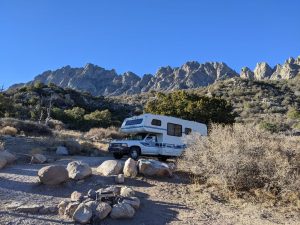 So we woke up at Aguirre Springs Campground and found ourselves in one of the most beautiful campsite locations yet. If you remember we arrived after dark last night and we could not see a  thing. We had awesome mountain peaks behind us and a beautiful view in front of us! All of this for $7 a night. We took our time getting going and after having breakfast and taking a few pictures it was finally time to head to the post office and pick up my General Delivery package. It was only about 20 minutes away and once that was completed we could head to White Sands National Park. This day was shaping up nicely. We headed back down the curvy roads to the highway and took in all the views that we had missed the night before. I was excited to get the package Julie had sent me because it contained a pair of new glasses, a few checks that I needed to cash, and a few other miscellaneous things. 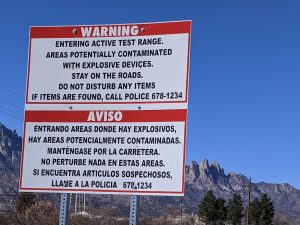 close as possible to White Sands NP. The only one that popped up was was the White Sands Missile Range, in a town called White Sands Missile Range. Now that I type this it seems pretty obvious I should not have picked this post office. Oh well as we got closer to the post office we started seeing warning signs that the museum that was open to the public was closed and you should only proceed on official business. We had a bout three miles to go to get there and we continued to ignore signs that strongly hinted at the fact that we should turn around. Now you might wonder why I didn’t just call the post office but every time we tried the number in the past we got a busy signal. Anyway the warning signs kept coming and we kept reading them and proceeding. After a few minutes we arrived at what looked like a military base complete with a guards and a guard house. We drove up in our 1992 RV and the guard asked me how we were doing. We said fine how are you? 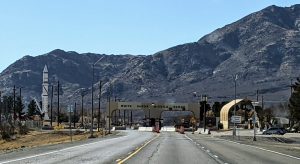 After these pleasantries were exchanged he asked me my purpose and said that the public was not allowed here and that the Museum had been closed for a while due to Corona Virus. I explained the mail situation and he was unfazed but he did tell me I could go through the gate make a U-turn and come back out and go over to a building just outside the base and talk to them about possibly solving my problem. He said to go in and make a U-turn do not stop for any reason and to come back out immediately. Yes Sir…you got it! Well as I went through I noticed that this U-turn was tight and there was no way our 21 foot RV would make it without stopping and doing a three point road turn. Well in my semi nervous state I ended up making it a 4 point road turn with the guards watching from the guard house the entire time.

Ok after finally exiting the base we went to what seemed like an information center and told them about the mail. He asked if I was active 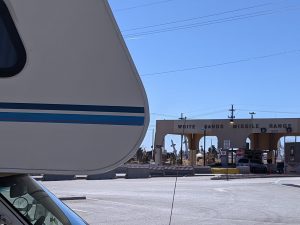 military, Veteran or an Army Civilian. No, Nope and Nada. The only things I had going for me was a Harvest Host Membership, KOA Membership and a Planet Fitness Membership. Hmmmm did not sound like any of these would help me at this time. So I asked if I could walk to the post office and get my package. He said you have zero chance of walking on the base as a civilian and with Corona Virus maybe a little less than zero. Ok so that’s a hard no right? Yes sir! OK I asked if I could call them and have them ship it to another location. He pointed to an old phone in the corner across the room and said I could call them and ask. So after 5 minutes of attempting to call and getting an immediate busy signal I went back to the counter and sheepishly asked for more help. He went in the back room and made a few calls and gave us a new number and the name of the person we would be talking to. I called the number and to my surprise someone answered. She was super nice and I explained our ordeal. She said she could bring it up to the gate but that she was the only one there and was not allowed to close post office for any circumstance. I said OK when is your shift over. She said in a few hours. So I told her no 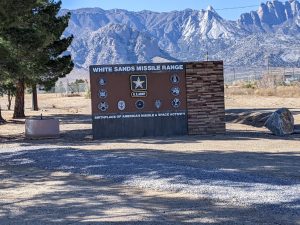 problem we would be glad to wait in our RV. Finally she said “tell you what I will bring it to you now and hang a be right back sign on my door. After thanking the man that gave us the number. He said glad it worked out and that God takes care of all of us. I think he meant especially people like me ha ha. Anyway we went outside and true to her word she arrived in about 5 minutes. I showed her my drivers license (Not sure who else would be trying to get my package ha ha!) to prove it was me trying to get the package. I thanked her profusely and we headed away from White Sands Missile Range base, package in hand knowing that we had single handily done an illegal 4 point road turn just past the security gates and caused their post office to close down for at least 10 minutes. I am sure somewhere in a top secret file their are videos of our RV doing this and I am sure people will be laughing. 🙂

Next stop White Sands National Park. We arrived there 30 minutes later and went inside and got

Lyns NP passport book stamped and a Map of the park. After driving through the gate and showing our National Park Pass we were in already amazed at the beauty of this place. We stopped at the first trail and noticed that dogs were allowed! This was very unusual for a national park. Usually dogs are only allowed in paved areas. It was awesome to take Jasper and go explore the park. We walked  the first trail and then headed to the next trail. This one was longer so we decided to leave Jasper in the RV. It was really beautiful and really took us out into the wild parts of the park. After 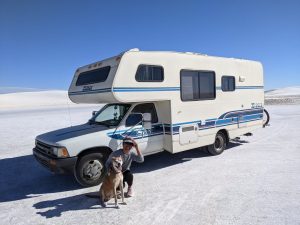 that we headed to the next trail which was a walkway and had lunch in the RV before heading out. I really love the fact we can pull over anywhere and just have lunch and take in the view of the place that we are at. Finally we decided to drive to the very end of the park. This is where the big dunes are and you can even rent sleds and slide down them. We were not prepared for the look of this place. Eventually the road was covered in sand and it looked more like we were on a salt flat than sand. There were a few people sledding and a few people dressed up in vivid dresses taking Instagram photos. It was stunning.We took a few pictures and decided it was time to head out and find our campsite for the night.

I had a few free ones picked out in Lincoln National Forest. We stopped at the first one and it was on a cliff looking over the valley. It was beautiful but Lyn was convinced that the high winds we were experiencing might just blow us over the cliff. So we went to the second one that was on Forest Service Road 568 above a cool town called Cloudcroft. We arrived and went on the Forest road that only had two other campers there. We all 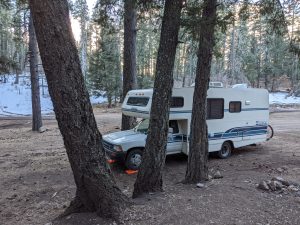 had lots of room around us and there was still snow from a snowfall that must have happened weeks before. It is so cool how we can just pull over and spend the night like this. We had a good sleep and the next morning we decided to head towards Albuqurque, NM and then to start heading back to NC so we could be home for the birth of our 4th granddaughter Nora! We are trying to be home in early March for this event. As luck would have it this put us going right by The Valley of Fires Campground so we decided to break up the drive and spend the night there again. Right before the entrance we saw a roadside stand called ZZQ and we decided to get a pulled pork burrito there. The lady was super nice and before we ordered I asked her what Sammichez where. I said it in a weird Spanish accent thinking it was a Mexican delicacy. She just laughed and said it was southern for sandwiches. Ha ha I continue to amaze myself and everyone around me. Anyway we settled in to our campsite watched a movie we had downloaded from Netflix and called it a night. Tomorrow we are headed just west of Albuquerque in search of a Navigational arrow. Thanks so much for following along! 🌵😁❤️✌️