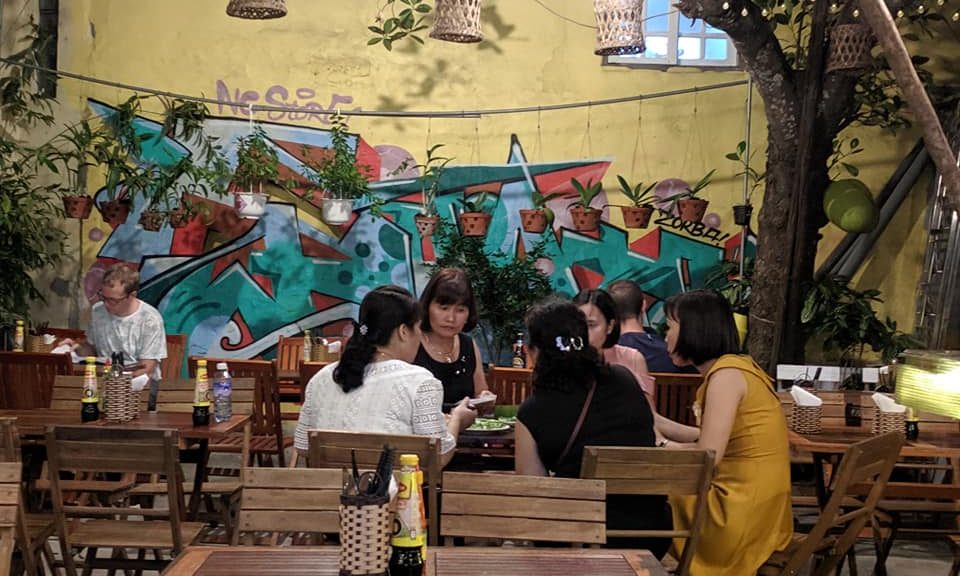 We got up and met for breakfast at 9:00 AM. After a breakfast of Banh Mi’s, eggs, fruits and banana smoothies we were out the door. 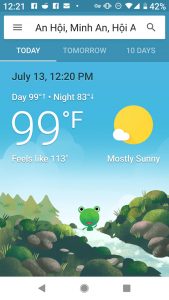 Wowza was it hot! I don’t meant a little hot, it was super hot. Like I am sweating so much that my phone does not recognize my fingerprint hot! But we did not come all this way to sit in our rooms so we walked and shopped and walked and took pictures and walked some more. Finally we decided to get out of the heat and do what everyone does over here when things get tough. We got a foot massage! The place was air conditioned so it felt good. We had to wait a few minutes for the staff to arrive and finally we were off in dream land. These massages were OK for $10 bucks but we had much better in Thailand. These girls talked the whole time and Lyn’s even was on her phone part of the time. All and all  it was good and the AC was great but we do miss Thailand and their professionalism. 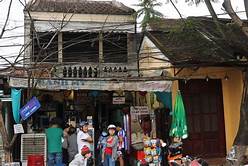 After that we decided to go get a Banh Mi sandwich at a place that Anthony Bourdain recommended called Banh Mi Phuong. It was about 15 minutes of walking from  the town and worth every bit of sweat to get there. We arrived to a little bit of a line out the door but I had read you could just pass the line and go in and they would wait on you. So that is exactly what we did. We went in and got a shared table in a packed room with fans running everywhere. After just a few seconds we sat down and the waiter asked us what we wanted. Now in Asia we have noticed that when they ask for your order they want the entire thing right now. The concept of ordering drinks to give you time to look over the menu is totally a foreign idea over here. If you tell them you need more time they politely back away a few steps and just wait on you. At first its a little unnerving but they are so polite that you end up going with the flow. Embrace the differences right?!?!?!? After a  great lunch we decided 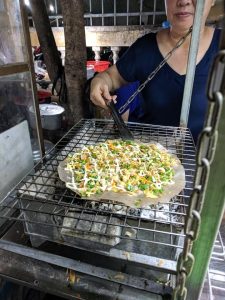 to walk back to our hotel which was about 20 minutes from where we were. We walked slowly taking pictures every chance we could and finally ended up back at our hotel to cool off and maybe take a short nap.

After resting we decided to go out and find a place for dinner. We both looked up places to eat and Julie found a place that was street food but it  had tables to eat at. The place was called Mr. Son and it had very high ratings. We walked down there and saw that all of his tables were full. We were standing across the street from his stall trying to decide what to do. Meanwhile Mr. Son himself motioned us to come over. He rearranged a few people and the next thing we knew we were sitting 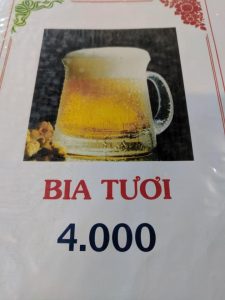 down looking at menus. The first thing I saw was glasses of beer for 3000 Dong each which is about 13 cents USD. Julie and I both got a glass and it was not that bad. It tasted like most any light beer. There was a lot to choose from on the menu. Lyn and I shared a few tasty things and Julie got a few good things as well. The food was awesome and the beer was, well……cheap ha ha! When we finished dinner we walked around for a bit and really just took in the sights and sounds of the place before heading home around 10 PM. (Party animals I know! 🙂

The next morning we all had eggs, bread, fruit and various drinks. Lyn was not feeling well and had a nagging cough that would not go away. The plan was to go check out the An Bang beach today but she decided to pass and just get herself better. I had been wanting to rent a scooter but with three people that would not work. (I know that I show pictures all the time with three or four people riding on 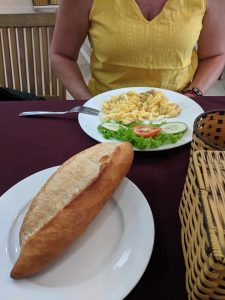 a scooter but it is technically illegal but usually they look the other way. However if a westerner does it, they will most likely get fined.) Anyway. I looked up how much a Grab was to the beach and I think it was $3 USD each way. I had already asked the hotel owner how much to rent a scooter and he said $4 USD a day. Wait what?!?!?!? I am getting a scooter!!!!! In Vietnam they ride on the right side of the road…..how hard could this be?!?!?!

The owners son showed me all the details and even took me to put some gas in it. I did not realize it at the time but Julie was not as enthused with this idea as I was but by the time I got back loaded with gas she said a Hail Mary and hopped on. She was going to man the GPS while I drove. The side roads where easy enough but all of a sudden we were on bigger roads and every intersection had no stop lights or even stop signs. I had been watching how it works and it looked like you just toot your horn and then watch out for each other as you go through. This did not seem natural at all in actual 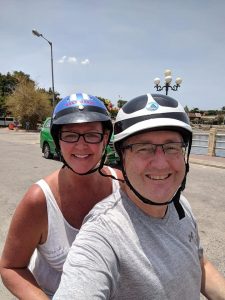 practice. Oh yeah and remember how I told you that as a pedestrian just walk out in the road and the scooters will just flow around you?!??!?! Well it felt crazy to have people just walk out in front of me while I was driving along! I mean really, here I am no stop signs or stop lights and cars and scooters everywhere and here comes all kinds of people just walking across the road. It was crazy to say the least. After almost having a slow motion collision with another scooter I kind of got the hang of it. (Sort of!!!) Once out of town it opened up a bit and we were at the beach in no time. We parked the scooter in a parking garage which really means a tin roof, sand floor and an attendant ready to take your money.

Once at the beach guess what?!?!?! It was crazy hot ha ha so we rented a couple of chairs with big ole umbrellas. The water was super calm and I actually tried to run get in it. I did not want to get my shoes sandy or wet so I went barefoot. After 10 steps in the sand I knew I was not going to make it. It was either run 20 more feet to the water and have everyone see the steam coming off my feet when they hit the water or make the embarrassing turn around move and run back and jump up on my chair. I did the latter and as I came back 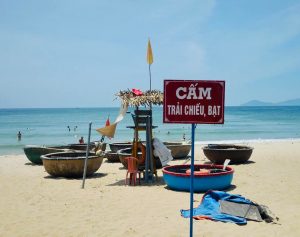 I saw a little bit of shade that was closer than my chair so I jumped in victory to that very spot only to find it only about 5 degrees cooler which meant somewhere around 180 degrees ha ha. After grimacing awkwardly I hobbled to my chair and picked my feet up. Wowza was that hot! Julie said I could use her flip flops and give it another go. So here I am someone who just 15 minutes earlier was a Scooter King mastering the roads of a foreign country reduced to wearing his sisters white flip flops to the water. So I did the best manly determined walk I could muster to the water and do you know what?!?!?!?!?!? It was worth all the pain and agony. It was calm cool and refreshing! 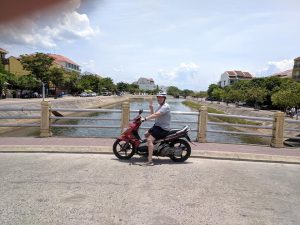 pat. Even took pictures and a few videos. We arrived to find Lyn not feeling any better so in her honor we all took a big old nap. Finally about 7 PM we all got moving and headed out to eat at Nostalife the same place we ate at the first night we were here. After dinner we did more walking around as Lyn was feeling better. Julie bought a few things to take home since it was her last night with us. She had to leave at 8 AM in the morning to start her long Journey home and Lyn and I had to leave around noon to go to Da Nang where we will spend one night before heading to Hanoi. We all turned in about 10:30 to get ready for the travel day in the morning. China is getting closer and we are truly getting excited to go on the next part of our journey. Thanks for following along!