Wow I have some catching up to do. After our great food tour we were ready to spend the next day in Ho Chi Minh with Julie seeing a few 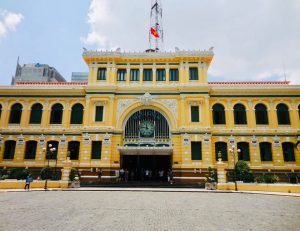 sights and trying to think of ways to beat the heat. (AC is the only way by the way!!!) After breakfast at the hotel we went out in the morning and headed to the Saigon main post office.

It was a historic landmark that was a beautiful building and still functioning as a post office even today. Now it also had gift shops in it as well. This post office was beautiful and kind of reminded me of train stations of bygone days. Then we walked to to Ben Thanh market. Julie had met a couple on one of two flights to Vietnam that lived in Ho Chi Minh. They told her that on the perimeter of the market was the no haggle zone which meant they had a fixed price and 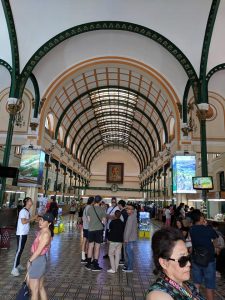 everything in the middle was open for discussion. So if you wanted something on the inside like a T-shirt, you would ask for the price and then you would immediately offer half that. You would usually end up somewhere a little north of half price. If they would not except your offer you would say thank you and politely walk away. About fifty percent of the time the sellers would come after you and give you your price. You could never just browse their items without being constantly talked to about quality, discounts, and why you should by from them. The fixed pricing gave you a more relaxed way to look at the items that interested you. Julie bought a few items and we were off to lunch.

Since we had walked there and taken a lot of pictures it was already 2PM. We decided that we needed air conditioning for lunch and in honor of Lyn we found a Jollibee about a 15 minute walk away so we 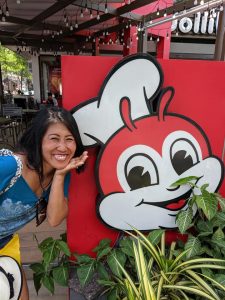 headed there. I think most of you know about Jollibee already but just in case you have never heard of it…. It is a fast food chain in the Philippines and it has really good food for fast food and they always have AC! We finally got there and enjoyed some chicken and a few Ube (Taro) pies! That with a couple of diet cokes and some wonderful AC gave us enough energy to walk home.

Now I know what you are thinking you make these poor woman walk everywhere in this crazy heat and you would be right. But to be honest that is where most of the magic happens. It may be a cool alley way or juts a scene of people on the street that you would not have noticed in a cab so yes we almost always walk. We all headed back for a nap or rest break. Later in the afternoon we all headed for some famous egg coffee.

Egg coffee is more like a dessert and one of the vlogs that I watch had a video that said that one of the best places called Goc Ha Noi was literally just around the corner from our hotel. You had to look really hard for it because it was up this small alley or hallway and then up some crazy stairs and then up to the third 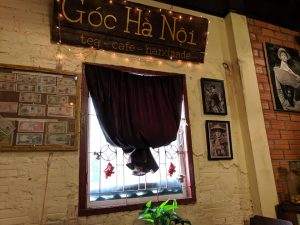 level and finally we were met met with a room that was very interesting with all kinds of decorations and it had AC! We ordered two egg coffees and Julie got an egg hot chocolate. It was said that back in the 40’s there was a shortage of milk and milk was too expensive for the average person to buy so they started using eggs instead with their coffee. When it came out the coffee had a meringue on it that was very sweet. It was delicious! You can see how they make it here. Then later we went to dinner at baba. We got the set and it was delicious. We finished the night on our party street at the top of a bar and just watched everything our crazy street had to offer. Finally we went to bed. Tomorrow we would be traveling to Hoi An! 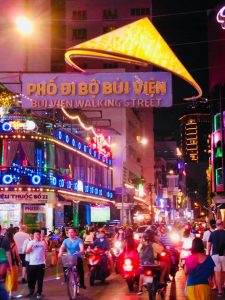 OK I have to catch this this blog up so I am going to breeze through the next day. We got up had breakfast and then headed to the airport. We got to use our lounge passes at the lounge and hang out for our flight. Our flight was delayed several times and finally we left but not before being called out of line to have our luggage weighed. They weighed our luggage and together we were over so we had to pay about $20 and Julie offered to have her luggage checked. We landed in Da Nang went out and met our driver who was sent by our hotel for about $14. The cab ride was about 35 minutes south to Hoi An. Once we were out of Da Nang things got a lot quieter. We finally 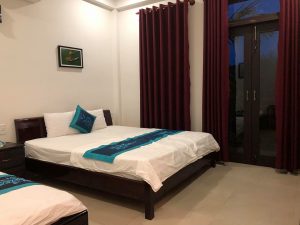 reached our hotel and the rooms where the biggest yet. These rooms were free to all of us do to credit card points but you could have one for about $35 a night if you had no points. We were on the third floor with no elevator so we had the extra bonus of a built in stair climber and did not need a gym ha ha! The family that owned it lived on the bottom floor and everyone had a role in making our stay there great. Anyway after we got settled in we headed out in feels like 112 degree temperatures and walked from our hotel to the night market which was literally just two minutes away. By now it was night time and 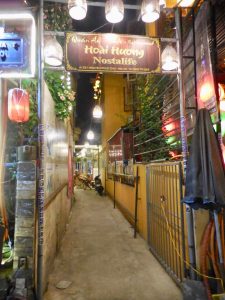 we found after meandering through the market a cool place to eat called Hoai Huong Nostalife  that was outside but had fans everywhere. It was such a great setting just tucked in off the main road. After dinner we walked around the ancient town a bit and just took it all in. There is a river running through it and boats and lanterns everywhere as well as stores, places to eat and people everywhere selling their goods. It almost had a Disney feel except that this town was real and had the history to prove it. After walking around for several hours and taking pictures we headed back to the rooms and to the comfort of AC. Cannot wait to see this town tomorrow!!! Thanks for coming along with us!