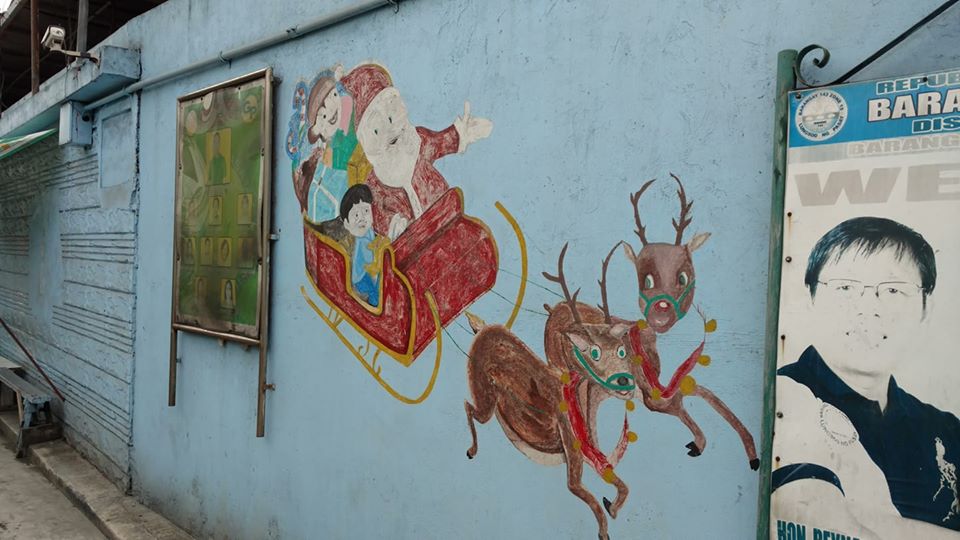 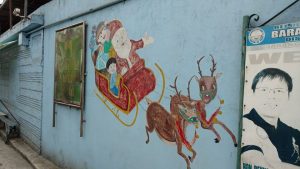 We all woke up around 6:30 and got ready for the day. Our flight was not til 1PM so we decided to take Lyn’s sisters to the Victory Liner bus station to catch the bus to Solano. We already knew the busses left at 8, 10 and 1 so we really wanted to get them on the 8AM bus if possible. Lyn and I left our stuff in the AirBnB condo as we would come back and check out after the bus station trip. We walked down to the corner to catch a cab and luckily for me there was a tricycle just waiting on us. One more tricycle ride before we headed back to the states! This traffic was the real deal and we weaved in and out of it for about 20 minutes finally pulling into the bus station about 7:40 AM. You can see part of the ride by clicking here! The problem was that this was not the correct bus station! We learned that our bus station was across the street and about one or two blocks down the street. The problem was that this was a one way street with a big barrier in between the streets so it would involve the driver going way down to a turnaround that he did not want to do. Luckily the was a pedestrian bridge over the street so we decided to 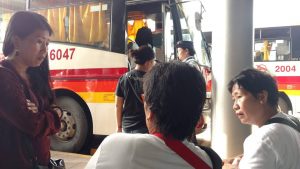 walk the rest of the way. We actually arrived at the bus station about 7:55 AM. Yikes this might be tight. Lyn went to buy a ticket and found out that the 8AM bus was sold out but went ahead and bought tickets for the 10 AM bus and put her sisters on the wait list for the 8 AM bus. Since we had done this before we knew their chances of getting on were pretty high. We waited with them and finally about 8:20 it was determined that they could get on the bus and they both got seats right up front. After a few tearful goodbyes they were on their way and we decided to go to Jollibee for breakfast. After breakfast we caught a cab back to the hotel. It cost about $4 and was very entertaining. The driver did not really speak English which is no problem but even when Lyn talked to him in Tagalog we were not sure how much he understood. Anyway after many instructions and several wrong turns we were back at the condo. 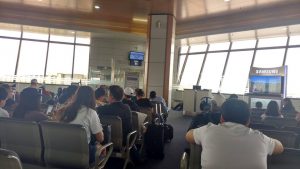 We took showers and packed up our stuff and headed for the airport. Surprisingly the airport was not super crowded and because we did not have to check bags we breezed on through. Finally we were sitting in our gate area with about an hour to spare before boarding. This time we would be flying a Korean airline called Asiana Airlines.  It would take us to Seoul South Korea and there we would change planes and fly to Chicago. The flight to Seoul would be about 4 hours and the Chicago flight would be just over 13 hours. Unfortunately we would be landing in Chicago too late to fly to Greensboro so we would have to spend the night in Chicago and then finally back to Greensboro the next day.

Asiana Airlines was super nice and had all of the usual amenities. The flight attendants where very nice and helpful and helped us enjoy 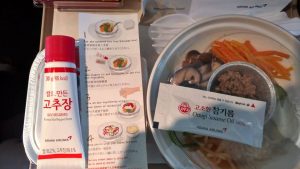 our time on the plane. We did end up sitting on the tarmac for about 50 minutes before take off due to heavy traffic but once we were airborne it did not take long before dinner was being served. You had several choices and one of them was Bibimbap! I happen to love this dish and when it came out I was not disappointed. It had instructions on how to mix all the ingredients together and I will have to say when you add two glasses of red wine, it made a really great meal. Lyn got the fish and rice meal that was good but she kept eyeing mine and wished she had ordered it. Oh well maybe next time. The 4 hours actually went pretty quick and before we knew it we were landing in Seoul South Korea. originally we had a two-hour 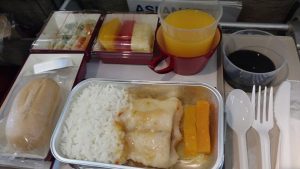 lay over but since we spent almost an hour on the tarmac in Manila we were down to an hour. We hurried through all the check points and arrived at our gate about 10 minutes before boarding time. The next leg was also on Asiana Airlines. This time our flight would be 13 hours which we were not looking forward to at all. We were happy to be on this airline though and we really had the same experience great meals great service and an on time flight. We finally landed in Chicago at 6:20 PM. Wow we made it through our 13 hour flight and it was really not that bad. We made it through security really quickly and because we had our bags with us we proceeded to the shuttle. We had reserved a room at the Hilton Airport for free using our credit card points. It is actually walking distance from Terminal 2. Since we landed at terminal 5 we took a quick tram to terminal 2 and then literally just walked through a tunnel to the hotel.

When we got to the hotel check-in they offered us a 15% discount on the hotel breakfast buffet. They said the price of the buffet was $32 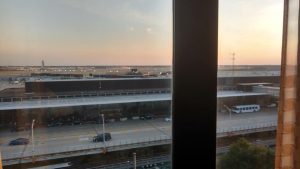 per person. Wowza. Welcome back to America! We said we would be fine without the breakfast buffet and told the hotel clerk that we had just been to southeast asia and we would have to adjust to these prices. As it turns out she was from the Philippines and totally understood. Finally we were in the room and finally could rest. Our bodies where all messed up do to the 11 hour time difference but we did fall asleep about 10 PM. About 3 AM we woke up and were wide awake. We actually made coffee and decided that we would go to the airport at 6 and get breakfast there and just wait there for our 9:30 flight. We checked out of our hotel and walked to Terminal 1 in about 10 minutes. We got our tickets quickly but 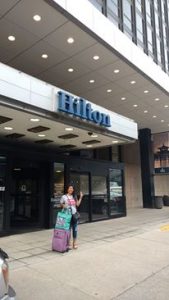 security was a hot mess. Staff members yelling at everyone and customers yelling back. It really was a totally different feel then all of the security areas we had been through on our trip so far. Finally after about 20 minutes were through and looking for breakfast. We found a McDonald’s bought the usual fare and found a  place to eat. By now it was about 8 and we decided to go to our gate. We got there a little early and the flight before us was having a delay. Apparently it was really behind, in fact so behind that the United people brought out free snacks and free water for everyone in the waiting area. Since we were there we got to partake! Nothing better than receiving free food in the Chicago airport where everything is super high-priced. Yum yum nom nom! Finally after a gate change it was our turn to get on our last flight and actually head home to Greensboro.

This flight would be about 2 hours and by now that seemed like nothing. We got on the usual small plane and within two hours we were getting off the plane. Dad and Joanne where there to pick us up and take us home. If you remember my daughter Rheagan kept Jasper for the entire month. She did a great job but the one thing we were not looking forward to was driving to Raleigh to pick Jasper up. With our bodies still being on Southeast Asia time I was a little bit worried about driving three hours round tip and staying awake the entire time. As it 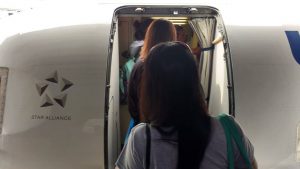 turns out Dad and Joanne did us a big favor and went the day before and picked him up. This was awesome in so many ways. Not only would we not have to drive to Raleigh but it would also mean that Jasper would be at home to greet us when we arrived. In about 15 minutes we were home and greeted by one happy dog. Cannot explain in words how helpful this was.

We had so much fun on this trip and literally went around the world. A lot of people have 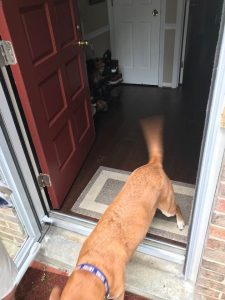 asked if we could have kept going and the answer from both of us is a big resounding yes! I would have loved to go for another month. With that being said it is always so nice to come home and be with friends and family. Thanks so much for following along. We really appreciate all of the good wishes, comments, prayers and positive vibes coming our way from all of you! I hope some of you are inspired to take a trip of your own! We get our first paycheck for the school year at the end of the month and you can be sure there will be money set aside for next summers vacation! See you in the Bye and Bye!