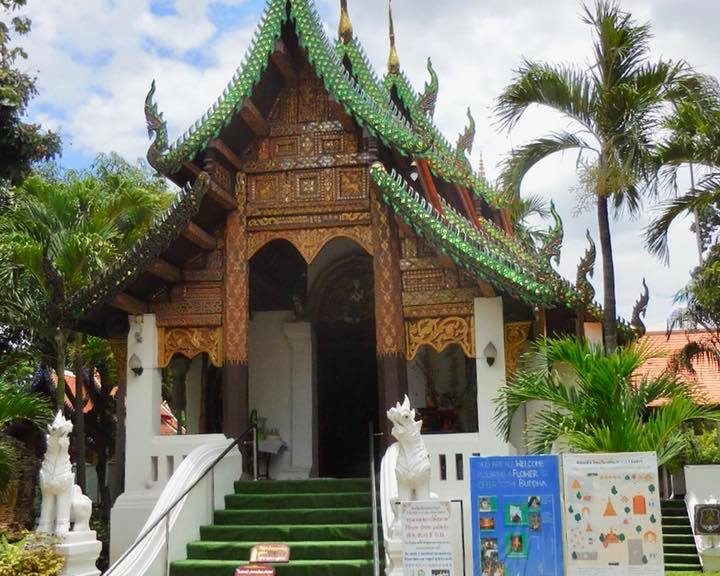 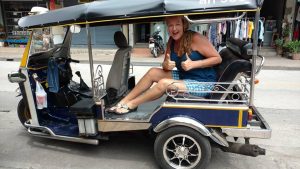 Today is the day I have been waiting for….we are going to Chiang Mai! I have read so much about this place and it has been on my must visit list for the last two years. Our flight was at 9 so we decided to get a cab around 7. When we checked out at the hotel desk I asked if they could get us a cab and what would the price be. It ended up being a little less than a Grab cab so we took it. In about 10 minutes we had a big van all to ourselves and we were off! We made it to the airport in about 30 minutes and made it through security in less than 5 minutes. Easy Peasy! The waiting area was small and super crowded. Luckily everyone was not getting on our flight! When our time came we headed to the gate and boarded a bus and headed to our first Air Asia flight. This is one of the airlines that we had seen multiple videos of them weighing customer bags and charging for any extra weight. On this day everyone just walked through with no issues. Not sure if it was because it was a big plane or not crowded or it was not the day to be checked. Either way we were up in the air in just a few minutes. The seats where very comfortable and the staff was nice just like our last budget airline, and if you wanted something to eat or drink you had to pay. The prices were not that bad and some of the food looked pretty good but we had already eaten so we just sat back and enjoyed the 2 hour smooth flight. 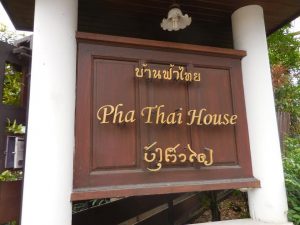 We arrived about 11 and I had read we could get a cab, a Tuk Tuk or a “red truck” (songthaew) similar to the one we rode in old town. We really wanted to ride a Tuk Tuk and as luck would have it there was one waiting right outside the exit. I had heard that it should cost about 150 Baht total which is about $5 US. I showed the driver the address to our hotel and he said 150 Baht. Sweet! We all squeezed in the back and loaded our luggage and we were off. The sights and sounds where everywhere. It was so much fun just sitting back and taking it all in. See the video below for part of our ride. 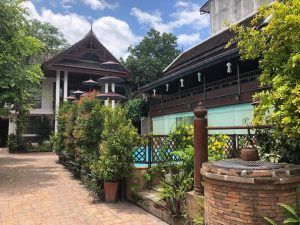 After arriving at our hotel we were greeted by a beautiful entrance and two of our hotel hosts. One checked us in while the other one gave us the lay of the land and showed us all kind of possible tours. The lady that checked us in had a pair of glasses that looked just like Harry Potter and the book she signed us in on was about three feet long by two feet wide. This really is a magical place for sure. As we were led back to our rooms we were more impressed with our choice of hotel. Thanks Agoda! Once we got situated in our rooms we decided to go have lunch at a hole in the wall place that had no name and no address. I actually heard about it on a Vlog called Kara and Nate! In the Vlog they showed the address of the place next door to the no named place to eat and so we put the address in Julie’s phone and started to walk. The app said it was about a mile away. We started heading that way and were really loving all the sights and sounds. But about half way there we started to get hot. No matter how slow we walked it was still super hot. I was drenched in sweat and still had a half mile to go. We were determined not to get a Tuk Tuk but promised ourselves that we would ride one home for sure. We kept walking and the App kept pointing us in the right direction up streets around alley ways and through back alley. All of a sudden we popped out right at the address looked right and there it was. This place had many choices but in the Vlog they stated that the Khao Soi was some of the best around and it only cost a 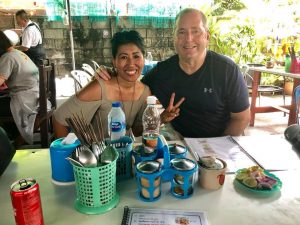 dollar. I had never heard of Khao Soi but it looked so good on their Vlog I just had to try it. The way they described it was “If chicken noodle soup and yellow curry had a baby that’s what Khao Soi would taste like.” They actually got that quote from the folks over at twowanderingsoles.com. We sat down in this open air area with nothing but locals around us. Within minutes we placed our orders and not too long after that our food came out. The description mentioned earlier nailed it and it was delicious. You just sort of wanted to hug the bowl and all of its deliciousness. We finished our meals and Lyn saw some small pork rind bags that were at the counter and got those to go. Wow we have only been in Chiang Mai for a little over an hour and have already found our hole in the wall place and had a great lunch! Yummers all the way around. We decide to hit up another place for dessert and as promised decided to ride in a Tuk Tuk to get there. This place seemed a little far away. After showing the driver the place and a map he really had no idea where the place was so we decided to go back to the room and cool 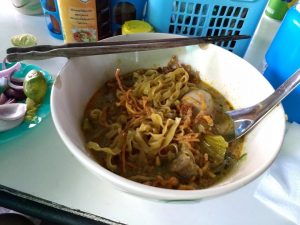 off for a bit. We were still pretty full from lunch and were planning on hitting up the night market later anyway so no harm no foul. We all went to our rooms and just chilled out while I caught up on the blog. After some down time and a cool shower we headed back out to find the night market. It was supposed to be super close and it was a bit cooler so we decided to walk. We were literally there in about 5 minutes. This was a supposed to be a small night market that was open every night. Even though it was small we were pretty impressed. The markets were on both sides of a very busy street. In fact you actually had to stand in the street to buy some of the vendors goods. I am not sure how to describe the night market except to say they have something for everyone. Seafood, poultry, pork, beef, veggies of all kinds and all cooked in  about a hundred various ways. It was almost too much to choose from……but we figured it out. When I got my food I asked the vendor if they 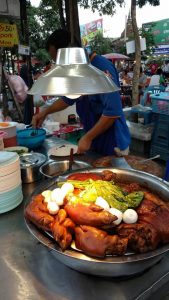 sold beer and she pointed to the 7 eleven right behind me and smiled. I asked if I could bring the beer to the picnic area and the answer was “but of course”. She kind of looked at me like I was stupid for even asking but all with a smile of course. In Thailand every sentence that I have heard is so soft and delicate and ends with a long pronounced Kaaaa sound and oh yes always a smile. I love this place! Click here to see Lyn’s meal being cooked Tomorrow we are going to an all day cooking school. With any luck Lyn will learn a few new tricks and Julie and I will not burn the place down! We are really enjoying this place even with the blistering heat it has a charm all of its own.  As usual thanks for reading!