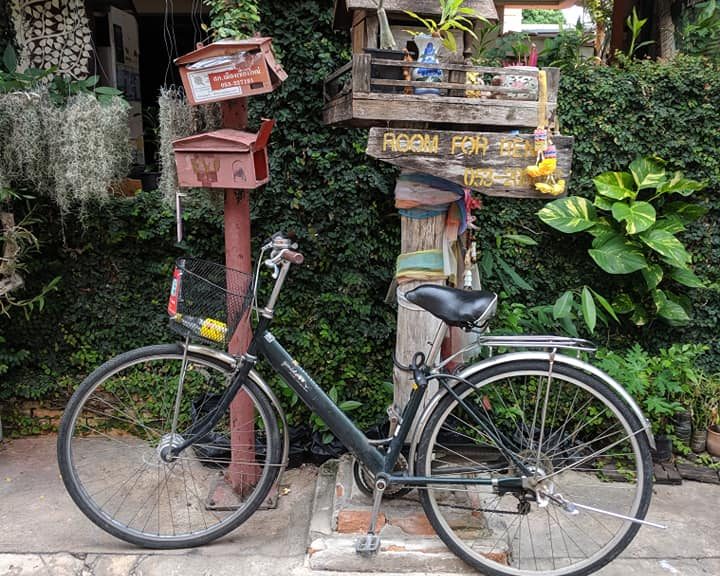 Well here we are again waking up in the beautiful town of Chiang Mai. Like I have said earlier we are enjoying temperatures that are at 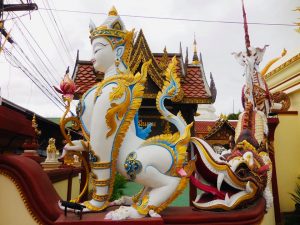 least 10 degrees cooler than last year. This has allowed us to walk just about everywhere which has been wonderful. This morning we headed back to the same breakfast place Cafe de Thaan Aoan. We pretty much had the same fare and it was as delicious as it was yesterday. Remember when I said not getting a meal included with the room let you try new places and here we are going to the same place twice in a row. That really tells you how good this place was. Tomorrow we plan to go local and just eat local food from food stalls but I am sure we will visit here at least one more time on this trip as it is just that good! 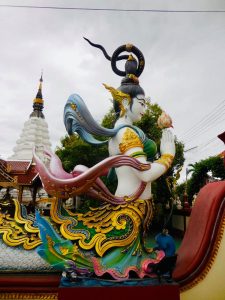 in. Everywhere you look there is something new and interesting to see. Lost of cool cafes, temples, art graffiti etc… We walked around for at least an hour and then headed back to the hotel to catch up on a few things and get our laundry that was supposed to be finished by 10 am. I literally had everything being washed except the clothes on my back. When we got back the clothes had not been delivered so Lyn went down to the laundry to check on it. Due to the cloudiness of the day before they were running a few hours behind. Anyway in about an hour all of our clothes were delivered clean and folded. We had about 7 kilos of clothes washed for about 240 baht which is about 11 dollars US. Awesome!!

We decided to head out to a restaurant called Cheevit Cheeva. It is a dessert place that is known for its snow ice. We went there last year and loved it. We got our first Tuk Tuk of the trip and the driver did not know where it was so he told me to navigate. This was a mistake all the way around. In about 10 minutes, I had us good and lost way up in a neighborhood with more dead ends than ways to get out. The driver asked me to call the place so he could talk to them and find out where it was. In about two minutes he knew how to get there and I was demoted back to passenger status. While my Tuk Tuk navigation job was short lived I would have to say that I enjoyed it but am pretty sure I have been banned from ever doing it again. Since this is a big dessert we decided to have it for lunch. The snow ice 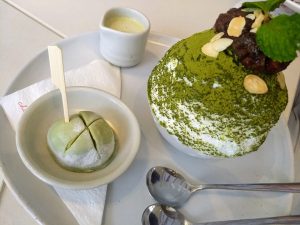 is actually called Bingsu which is very popular in East Asia. It is totally different than shaved ice and is fine like snow but somewhat slow melt. You get it with most any kind of concoction on it. Ours was red bean and Green tea and Julie got caramel custard. They both came with a sweet sauce that you could drizzle over the entire thing. We also ordered a small side order of red beans  covered like little sweet buns. The tastes of the red beans in the snow with the sweet sauce was delicious and so was the caramel one Julie got. Yum yum!

After this we decided to go to Nimman street which is known for being a hip area outside of old town. This time we took a Grab taxi and he had no problems with directions 🙂 When we got there I was expecting a much smaller place. We really could not find what I thought we 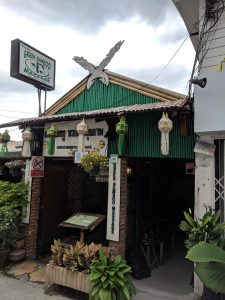 should be seeing so after about an hour of wandering around and only seeing a few cool stores we decided to head back to the hotel as we had a regular Thai massage scheduled at our favorite massage place The Green Bamboo Massage. It is literally less than a 5 minute walk from our hotel. After our massage we all decided that it was the best one that we had ever had. Instead of feeling sleepy we actually felt energized.

We headed back to the room and after catching up on a few internet things we headed out to dinner. 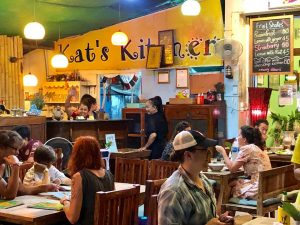 Julie had found a hole in the wall with great reviews called Kat’s Kitchen. It was about 10 minutes away and when we got there it was packed with foreigners and locals alike. Luckily we were able to get the last open table. We ordered an array of food and really enjoyed the food and the vibe of the place. After dinner we decided to walk a little bit out of old town and go to a place called Johns Place. It had a rooftop bar and we thought it would be fun to watch life go by from that view. When we got there we found out they were having a private event on the roof so we ended up having a beer in the lower area and then headed back home. Another relaxing evening with great temperatures and great company. Could not ask for more. Tomorrow we are going temple sightseeing and trying to eat all of our meals from street food type stalls. Should be in for a fun day. Thanks for following along!

2 thoughts on “Another Groovy Day in Chiang Mai!!!”