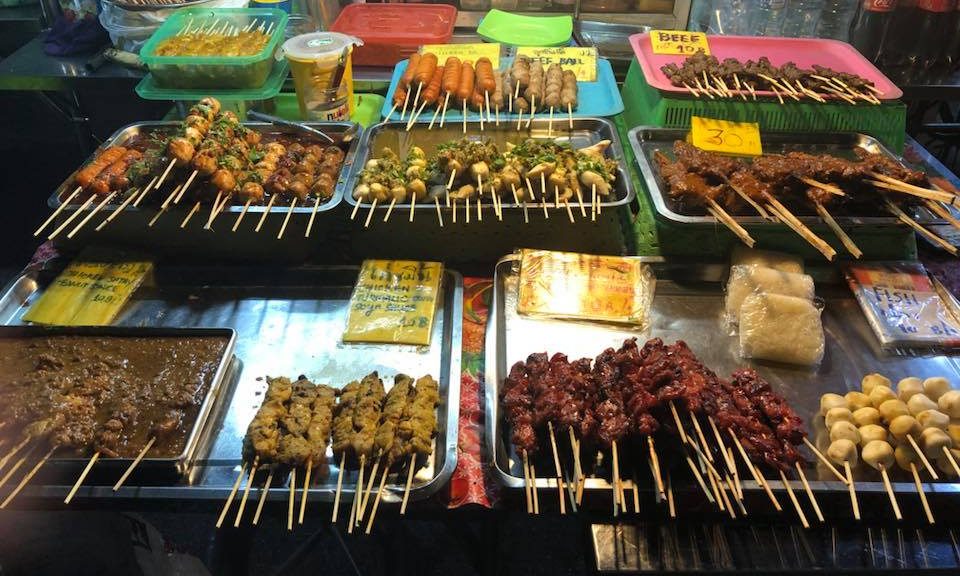 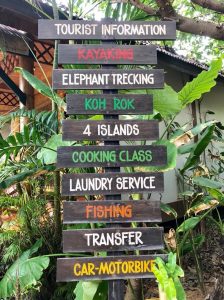 So after a great travel day yesterday we woke up to perfect weather. Sunny and not too hot at least not yet. We went down to the breakfast buffet and enjoyed a great assortment while sitting just a few hundred feet from the ocean. They had everything that we could want. It was the usual fair, along with some things that we had not tried before. We decided that after breakfast we would hire some transportation to get to Old Town. Old Town was about 20 minutes away on the other side of the island. We decided against scooters since we were still having the effects of Jet lag and were not sure if we were up to driving on the left side of the road. Also they had heavy rains the night before so there was a lot of mud and standing water on some of the streets. Any way we ended up hiring a Songthaew. It was more or less a pickup truck with padded seats in the back and a nice cover to block the sun. It was actually very comfortable and about 10 times more fun than riding in a van! After about 20 minutes of winding roads and going through several construction sites we arrived at Old Town. It was a quaint village with all of the usual tourist shops but still had a charm all its own. The one thing that was missing was tourist. We were about the only tourist there and just about had the town to ourselves. Lyn and Julie loved looking in all the shops and Lyn actually bought a dress for about $6 US dollars. The great thing here is that almost all the clothes fit Lyn here right off of the rack. It is so nice for her because almost everything she buys in the US has to be altered. Anyway after walking around and taking pictures it started to get hot. Luckily it was 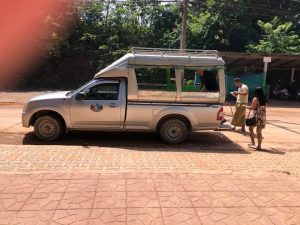 about lunch time so we picked a restaurant that looked out over the water but still kept us in the shade. We also had a fan pointed at us so it was pretty comfortable. By now a few more tourist had come into town but it was still not crowded at all. Just past our dining area they had a small pier and a swing at the end of it which was perfect for taking pictures. After we finished lunch we of course got our pictures and decided to go have some ice cold drinks at a coffee shop a few doors down. We had worked out a deal for our driver to come back at 2 to pick us up. (Grab was not working in this area.) Lyn and I got cold coffee drinks hoping the caffeine would keep the Sandman away and Julie got a fruit smoothie. By the time we finished our driver pulled up and we headed back to the hotel. Love love love this type of transportation and had just as much fun riding it back as we did getting there. When we got back to the hotel it was time for our usual nap but today we skipped it. I wrote the blog and Lyn got caught up on a few Internet things. At about 7 we decided to go to our same hotel restaurant since the last two meals had been so good. We got to sit right next to the beach again and had our dinner with another great oceanfront view. While we were eating another 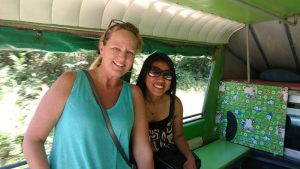 couple noticed that Julie was vaping. They said that they vaped too but had read that it was illegal in Thailand! Wait what?!?!? They asked what her experience had been and she told them she had pretty much vaped wherever smoking was allowed. They were shocked. They said that they had both bought cigarettes to get by for the trip. I will have to admit that we had hardly seen anyone else vaping and did not see any vaping supplies for sale but it never dawned on us that it was not allowed. Anyway we looked up on the internet and sure enough he was right. We now are keeping a little bit of cash just to bribe or bail Julie out of a situation ha ha! We shall see. By the time we finished dinner we decided to call it a night as none of us had taken a nap that day. What a great relaxing day this was. Tomorrow we head out about 11 AM in a Van to Krabi. 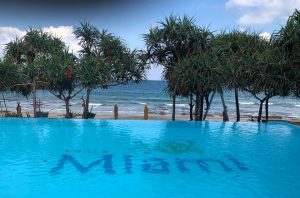 We are sleeping pretty good at night but still wake up for two or three hours a night. Hopefully we will switch over to our new time zone soon. The plan for today is to catch a van to Krabi and spend the night there. Then the next day we will fly out to Chiang Mai. The van we booked was not coming till 11AM so we decided to eat breakfast and then hit the pool. We had been running around so much that we had not even gone swimming yet. This beautiful pool deserved to be used so that is exactly what we did. Julie and I went swimming and Lyn took pictures. After relaxing for about an hour we decided we better get ready to leave and by 10:45 we were all downstairs waiting on the van. At about 11 the van arrived and shockingly had no one in it. The cool part was this meant that we got to pick our seats the bad part is that meant that we would spend the next 30 or so minutes picking up other guests. It actually turned out to be cool because we got to see other hotels and hostels. Finally when it looked like we were full and 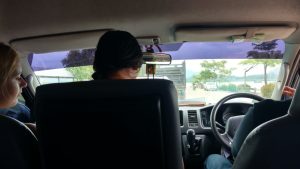 ready to go, we made one more stop and picked up one last passenger. We all wondered where this person was going to sit when the driver folded down a seat between himself and the front seat passenger. Problem solved. Now we were truly full and on our way. The ride was supposed to take about two and half hours. We of course got on the ferry again and of course all of us had to sit in the van while the drivers and other scooter riders where able to be out and enjoy the view. After about 30 minutes we were across and back on the road. One interesting thing was that this ferry had an ambulance riding on it. It had all of its lights flashing when it got on then turned them off for the ferry ride and then back on when they got off. Hopefully the person inside was OK. After about 1.5 hours more of driving the driver pulled 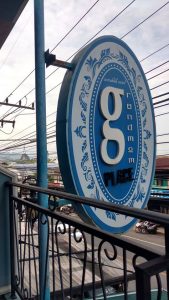 over a small store and we all got out to stretch our legs, used the bathroom and get snacks. I bought some homemade purple yam cookies that were super good and both Lyn and Julie got snacks and we were on our way. We arrived at Krabi about 30 minutes later and were not sure what to expect as everyone would need to be dropped off at their own hotel. As usual they had a better system and we all got out and everyone was herded into a room to work out a plan to get them to where they were supposed to go. Of course everyone was speaking multiple languages adding to the chaotic scene. I knew we were close to our hotel but not sure exactly where it was. Finally our turn came and we were told it was just around the corner. After we walked a block we still could not see the hotel. A nice cab driver tried to get us a ride. We showed him where we wanted to go but he was not sure so he sent us to a tourist help desk. They pointed right up the street and with in 3 minutes we were there. Nothing is ever straight forward on a trip like this but it almost  always works out. Finally the next thing we knew we were unpacking in our rooms at the Grandmom hotel. The lady that checked us in was super nice and the rooms though not fancy were clean and had just about the best balconies I have ever seen. Oh and they sold large beers for 65 Baht in the lobby which is about a $1.60 US. This place was everything we needed for the one night we were going to be here. After getting settled in we headed to a local market where we got try some local food. This market was where all of the locals got their food and it had a really cool vibe and some really good food. Basically you just point to a pre-cooked  kabob and they put it on a charcoal grill for a few 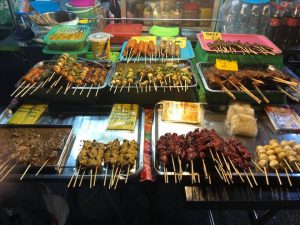 minutes while you just stand there staring in an anticipation. Yum yum! After sampling a few things we saw a guy frying dough and we decided to get a bag. Pretty much tasted like fresh made donuts but he also gave a coconut sweet sauce that was really good. After finishing off the entire bag we were all pretty full. We decided to go back and grab a beer and sit on the balcony, then go get a foot massage and then head out for dinner. While Julie was Vaping on the balcony she noticed that the police station was directly across the street. We have the bail money ready at all times ha ha! 🙂 Once we finished relaxing we headed over to get a foot masssage just around the corner from our hotel. It was awesome just like the last one and cost about $12 US dollars for an hour. (That $12 included a tip by the way.) After the massage we saw another market with street food and decided to head down and try some things out for dinner. Lyn and I tried the pork and chicken skewers while Julie had something similar to a Nutella Crepe. Yum yum all the way around. After that we headed back to the hotel and stopped at an open air 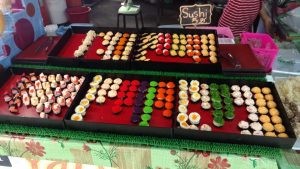 corner bar and just watched the nightlife go by. After a quick rain shower we decided to call it a night. Tomorrow we are heading to Chiang Mai by plane. It is about a two-hour flight away and we should be there in time for lunch! If it seems like I am always talking about and thinking about food it is probably because I am. There is so much to try here and it is all so good. Will have to double down on the diet when I get back for sure. We are looking forward to getting to Chiang Mai as we stay in the same place for four days! As usual thanks for reading! If you want to be notified by email about any new posts please subscribe to the blog