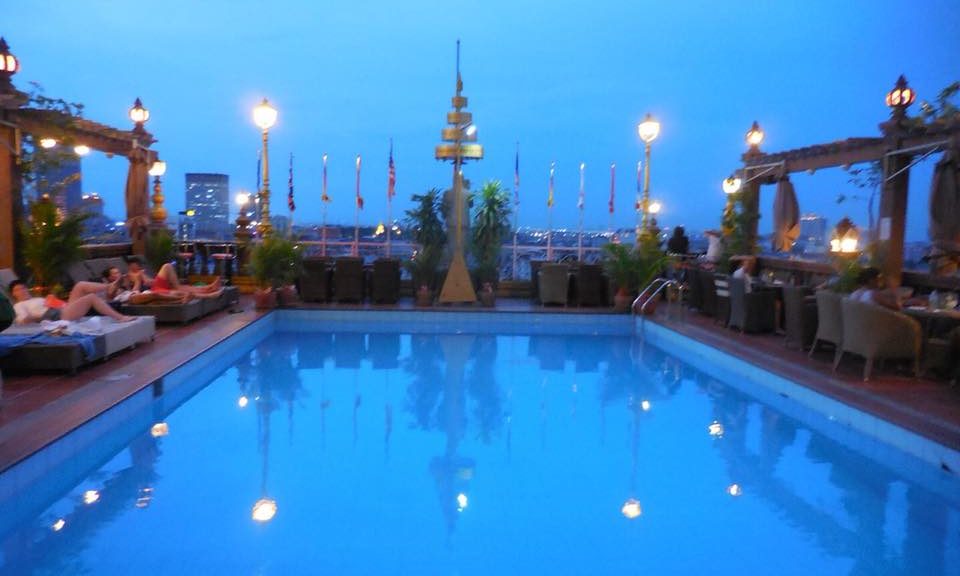 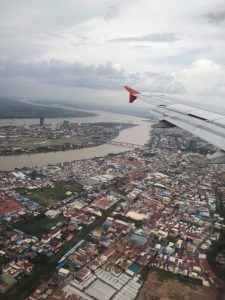 Well as you may have noticed I skipped a few days. Our last day in Chiang Mai was super fun as we ran around town and visited more Wats and shopping areas. We even went to Chinatown which had a super cool vibe all its own. Finally Sunday night we went to the Sunday night Walking street. It was super crowded but had lots of interesting vendors selling items and food. I am not even sure what I had for dinner but it was delicious and only $1. It did start to rain at the end of the night so we jumped in Tuk Tuk and headed for home. We have all had a great time and all plan on coming back to this unique beautiful city. The next day we grabbed a Tuk Tuk and headed to the airport. We flew to Bangkok and then on to Phnom Penh. Pretty uneventful all the way around. We landed in Phnom Penh and we needed to get a Visa. This is something we have not had to do before. The process took about 15 minutes and we were through. The next thing we knew we were in a Tuk Tuk and heading for our hotel.

The scene was crazy as we left the airport. The traffic was the heaviest that we had seen and the sights and smells were everywhere! I have read that Cambodia has been compared to the Wild Wild West and now I see why.  As soon as you hit the streets your eyes are wide open and your heart is 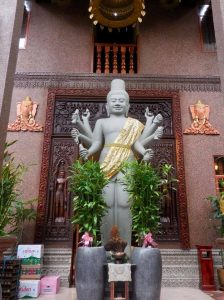 pounding with excitement. Julie said “Wow just Wow” and I think that best describes what we were in the middle of. We all just loved it. The Tuk Tuk was $10 to the hotel and took about 30 minutes to get there. Finally we arrived at the entrance to an alley that our driver said he was not allowed to drive up. We did see a small sign that said “Okay Boutique Hotel” We walked about 100 feet and on the left there was the beautiful entrance to our hotel. We walked in the lobby and everywhere you looked was either gold or carved wood. Even the ceilings. After giving the nice lady at the desk our passports they asked us to have a seat while they got our rooms ready. In about 5 minutes we were given keys and we went to our rooms. They were beautiful and surpassed our expectations at every level. These rooms were $40 a night and included breakfast. It also had a rooftop pool. We had seen the pictures of the pool but wanted to see it for ourselves. We arrived on the 14th floor and stepped out of the elevator and there it was. A beautiful pool with views in almost every direction. It even had stairs that lead up to the partial 15th floor where breakfast would be served. We ended up getting a few drinks and having dinner right by the edge of the pool and the edge of the rooftop. Awesome! After a few hours we 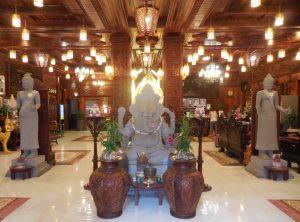 called it a night. We had talked to another guest and he asked us if we were going to visit the Killing Fields. We had really been pondering whether to go or not but he convinced us to go. As many of you already know Cambodia has a heart breaking history. This killing field that we were going to was the place of just one of the killing fields where over million people were killed and buried by the Khmer Rouge regime between 1975 to 1979. Lyn and I had seen the movie “The Killing Fields” so we knew a little of the background and we all decided that while this would be a tough thing to do we owed it to these people to better understand their history.

The next morning we had breakfast on the 15th floor. It was great and had many selections. After breakfast we went downstairs. I had already been to the laundromat that morning and on the way back a nice Tuk Tuk driver asked me what my plans were for the day. I told him we were still working it out and i would let him know once I talked to my group. Anyway he said just ask for driver number 2 and that is exactly what we did. He said he would take us to the killing fields wait on us and then take us to the Russian market and wait on us and then bring us back to the hotel. The entire trip would take between 4 and 5 hours. His price was $25 dollars. That seemed fair to us so we were on our way. By the way almost everything here is paid for in US dollars. The only time you use local money is when you get change that is below a dollar bill. This definitely makes it easy to understand the price. Anyway the ride out was amazing. We went down so many roads and finally ended up going out  to  the country, going down back alleys and side streets through neighborhoods and country side. I think we all agreed we would have paid $25 just to see that. If you want to see a short video of our travels click here. 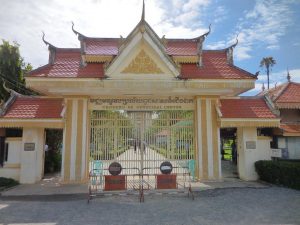 Anyway we finally arrived at the site and for $6 dollars we could tour the site. The tour would take about 2 hours and came with an audio headset so we could get all of the details that took place here. We all turned on the audio and literally with in 5 minutes we all had a lump in our throat and tears in our eyes. For the most part you were outside walking around as they explained the different areas. As you walked past the mass grave areas you heard 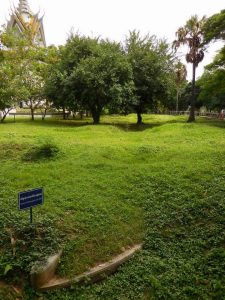 actual comments from some of the survivors and the impact it had on their lives and their families. I remember one man who had survived said it was like all of the survivors lives had been shattered like glass and only the individual could try to find all the pieces to put back together again. He was still to this day trying to find all of his pieces. We went from place to place where all of these atrocities had happened. I cannot go into detail here for fear that I would not do it justice and I feel like you should hear about it from a better source than me but I will say that there was not a person there that was not greatly affected by it. Finally after about two hours we left this place with a heartfelt respect for the Cambodian people and what they have gone through.

We headed to The Russian market. You can see a glimpse by clicking here. Apparently years ago this market was started by Russian immigrants that have mostly long left Cambodia. The market  is like one big block and once inside it is a maze of clothes, jewelery, housewares, food, etc. You name it they probably have it. It was fun walking through all the areas and seeing all they had to 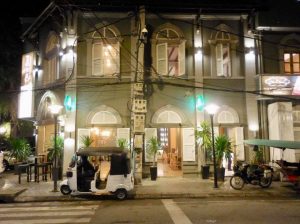 offer. Julie bought a few shirts and both Lyn and Julie bought sunglasses. After about an hour we headed back to the hotel. The driver asked if he could drop off a package and we all just enjoyed the scenery as we went around town. Finally after about 5 hours we were back at the hotel. It was pretty hot and we decided to go up and have lunch by the pool and take a dip. We thought about going on a river cruise but a sudden shower came up and kind of ruined our plans. We had seen an official looking Khmer restaurant and had been wondering what Cambodian food was really like. So we decided to go there for dinner. It was a beautiful place and only about 3 or 4 blocks from our hotel. We had a great meal and watched the traffic go by as we ate. After that we picked up our laundry and headed to the hotel to have one more drink by the pool and call it a night.Tomorrow we head out to Siem Reap, Cambodia. We have a short 45 minute flight leaving around 9. Thanks for reading!