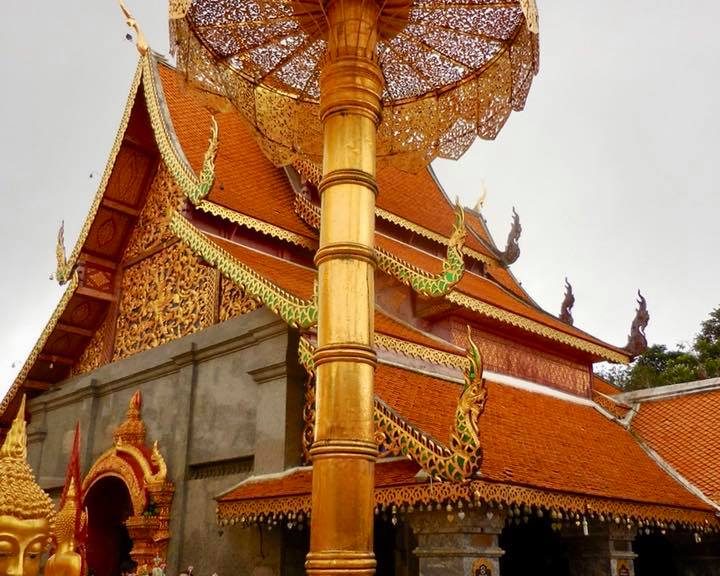 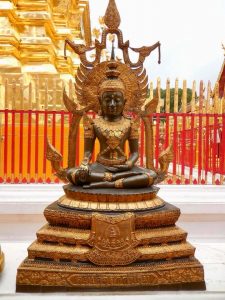 So we had originally planned on making a day trip to Chiang Rai which is about a 3 hour trip away from Chiang Mai. It has beautiful temples but when we looked at the bus schedules all of the early busses were sold out. We were kind of disappointed but also a little relieved because a total of 6 hours on the bus was not exactly appealing even if you are rewarded with the city views of Chiang Rai. Anyway we decided we would visit Chiang Rai if we ever return to Thailand…..spoiler alert we will return and most likely sooner than later. Anyway we decided to go to Wat Phra That Doi Suthep It is a sacred temple that is about 9 miles from the city of Chiang Mai. In fact it sits on the top of the mountain Doi Suthep and looks down on the city of Chiang Mai. We decide that we would tour the temple in the morning, then go get some lunch and then come back to the hotel around 2. I had researched the best way to get to all of the places we needed to go and decided that after we Tuk Tuked, Red Trucked and whatever else was needed that we would spend about 650 Baht total. I also read that for about $800 Baht we could just rent the entire Red Truck for about 5 hours which would give us the time to do everything we wanted to do. We needed to find an empty Red Truck that did not have any passengers in it. As luck would have it about 2 minutes after we stepped out the front door of our hotel a brand new bright shiny Red Truck pulled up. It was empty and offered us a ride. I asked him if he could take 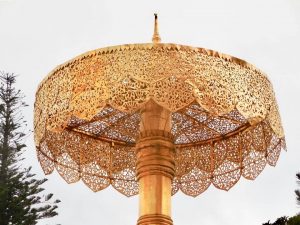 us to Wat Phra That Doi Suthep and then wait on us for two hours and then take us to lunch and wait us to eat and then finally bring us back to our hotel. He said he could and I asked how much. He did not hesitate and said 800 Baht. Sold!!! We are now the proud owners of a brand new Red Truck with driver I might add for the next 5 hours or so! We all hopped in the back and headed out. We went through all the usual craziness of the city and then finally started to get out-of-town and head up the mountain. About half way up he pulled over and let us take pictures on the scenic overlook. It was already beautiful and we still had not even gotten to our destination yet. As we went up the winding roads we saw people walking the mountain as well as a lot of serious bikers biking up the very steep mountain. We also saw the usual scooters as well. Finally about 15 minutes after the overlook stop we arrived. It was a little chaotic with everyone dropping everyone off. Our Red Truck driver showed us 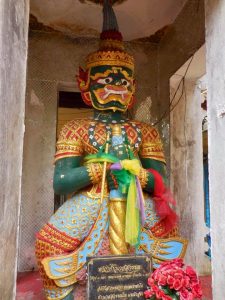 where he would be parked and we told him we would meet him in two hours. We climbed a few stairs to the entrance and were looking forward to seeing the stairs to the actual temple. They are grand to say the least. They go straight up the mountain and have two giant dragons on both sides. Julie had just taken her clothes to be washed and needed to buy some type of cover up for her legs. Most temples require that your shoulders be covered and that you also be covered past your knees. Julie made a quick purchase of some lightweight pants and we were off. We had to climb 309 steps to reach the top. It turned out that it looked much harder than it really was. In just a few minutes we were at the top. We toured the outside and took in the great views of Chiang Mai down below. The air was cooler up here. Still warm but nothing like our previous days have been. We really enjoyed the views and the occasional Monks that would walk by. Eventually we went into the inner area of the temple and let me just say we were blown away. There was so much gold color everywhere with all kinds of other colors mixed in. Hopefully you will get the feel of it from our pictures but let me tell you they will not do it justice. You can click here for a short video of just a small part of it. You have to go there in person! (Start planning your trip right now people! Ha Ha) Anyway we walked around and looked in prayer areas and really just took it all in. After about an hour and a half we decided to head back down the 309 stars to our Red Truck. When we got to the bottom of the stairs we bought a few cokes and I bought a cup of corn kernels covered in coconut milk. Super yummy! Once we finished our drinks we headed 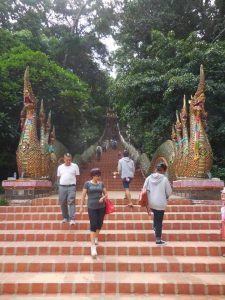 down to the parking area and our driver was right where he said he would be waiting us. Now you may wonder if we could trust the driver to be there but it was really more about him trusting us as no payment was expected until we made it back to our hotel. We got to the driver and showed him the address to the place we wanted to go for lunch. He did not know the place but knew the area so we all just figured it would work out in the end. We drove back down the mountains curvy roads and in about 20 minutes hit the edges of town and watched the traffic get busier and busier. Finally after making a lot of turns and in and out of alleys the driver stopped and asked to see the map again. Finally after driving about 10 minutes more we pulled up to Cheevit Cheeva. We had read about this place on one of my favorite blogs Millennial Revolution. They do a “Lets Go Exploring” series and write about all of the places they have traveled. When I read their Chiang Mai post and saw this dessert place I knew we had to try it. Cheevit Cheeva has many great desserts but the one that really had our eye was the 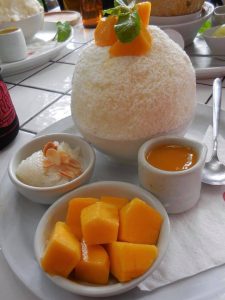 mango and sticky rice snowflake. The desert looks like a big snowball with mangos and a special sweet sauce that can be poured all over it. Julie and I both got the mango sticky snowflake and Lyn got a similar snowball but hers was called the melon mascarpone with cheese. Since this was going to be our lunch I suggested that we all get our own. So we put in three orders. Lyn’s came out first and it was sight to see not only was it huge but it actually had a smoke coming out from the bottom of the dish. I do not mean a little smoke I mean billowing out. You can see a short clip of Lyn’s smoking dessert by clicking here. Mine came out next without the smoke fan fare and finally Julie’s came out as well. As we looked around the cafe we noticed that most everybody else was sharing just one of these items but here we sat with three. Well we did the only thing I know to do in these situations we dug in. 🙂 The snow ball part is kind of crazy because it is just like a dry snow if that makes sense. They have a machine that shaves the ice unlike any shaved ice we had seen before. I found out later that it was made out of 100% whole milk and probably some other secret ingredients. It was not super sweet but it was delicious. The weird thing is it really did not seem to melt like you would expect it to. As we worked our way down it just got sweeter and sweeter but never too sweet. Well much to the surprise of just about everyone around us including the staff we just about ate every last drop! Yum Yum Nom Nom! We stumbled outside and as usual our driver was waiting on us. In about 20 minutes we were back in the hotel feeling something between a brain freeze and a food coma but we all three had smiles on our

faces. We were well prepared for our next activity which was to go to our rooms and take a two-hour nap and that is exactly what we did. Now I know what you are thinking. You had so much food there is no way you are going out to dinner! But that is where you would be wrong. We heard that the Night Bazaar was a fun place to go and see the markets and also experience some more food stalls. We caught another red truck and about 15 minutes we were there. The Bazaar was full of vendors selling everything you can imagine. We saw flowers carved out of soap, fake Rolex’s, fake branded Nike tennis shoes and lots of trinkets of all kinds. By now we are seasoned pros at this and headed straight to the 7 eleven and bought a beer because that is the cheapest place you can buy it. As Julie found out they will even open it for you before you leave the store. (These beers needed a bottle opener.) We went to the food court and got several meat skewers and that delicious Khoa Soi that Lyn and I split, and Julie got some of the Teriyaki and Satay chicken skewers. After dinner we walked the markets for a few more hours until we just could not take it any more. We caught a Red Truck home and were in bed by 11 PM. It was another wonderful day in the great city of Chiang Mai. Tomorrow we have no big plans but in the city of Chiang Mai all you have to do is walk out the front door, get in a Red Truck or a Tuk Tuk and your adventure will begin. As usual thanks for reading and following along! Oh and by the way just in case you were wondering we gave the driver a 200 Baht tip for his service bringing our bill to a 1000 Baht. Sounds kind of expensive when you put it like that but 1000 Baht is equal to about 30 dollars US. Not too shabby!