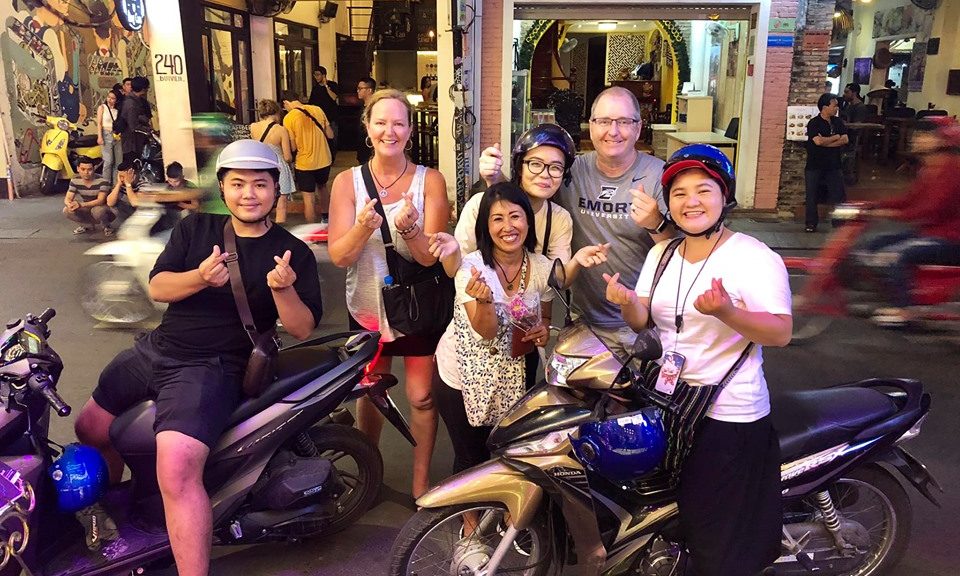 OK hang on to your seats for this one because that is exactly what we did all night long. Our food tour was supposed to start at 5:30. 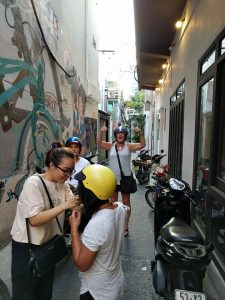 Julie’s flight that had been delayed arrived in time for her to arrive at our hotel about 4:30. At 5:25 we all met downstairs for our food tour. Su Le from Saigon Street Eats was already there with a big smile on her face and a very welcoming nature. She said that her two other drivers would be here any minute. She went on to tell us we would be the only three on our tour which would allow us to do a few extra things. She then told us that they were going to take us out to the “Kissing Bridge” so we could get a better look at this great city and then meander through town and end up at our first stop. We were going to have five stops total. Four dinner courses and then a dessert course to top it all off.

I was really looking forward to this when I first watched the Int Affair video about it. The food looked great but to be honest they had me already when they mentioned the word scooter ha ha. I love riding 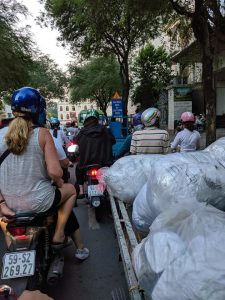 them but would have to be in Saigon a lot longer to be able to gain enough skills to ride in this city. For the last two days I have loved seeing them drive throughout the city but in my heart I have wanted to be on one. Now I had my chance to ride through town zig-zagging through all the traffic as a true participant!

So after the other drivers arrived and introductions where done we hopped on the back of their scooters and away we went. My driver was Vinh, Lyn’s driver was Mia and Julie had Su Le. It was so much more fun going through traffic this way. I really was like a kid in a candy shop! I could not stop grinning. Anyway we went on our way through town and ended up pulling over at the Kissing bridge. We got off the bikes and took a few pictures and took in the view.

Then we were back on the scooters and back in traffic heading to our first place to eat. Ho Chi Minh is 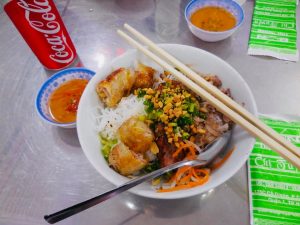 broken up into districts. This tour would take us to a few we had not been to before. When we showed up at our first dinner stop we all got off and went up to the second floor and got a table. Su Le explained what we were about to eat and about some of the history of Vietnam. Meanwhile Mia would run and make sure that our meal was ordered and that we had drinks coming as well. Su Le and Mia worked well as a team and we really felt well taken care of. We had the Bun Thap Cam noodles mixed which had so many good flavors in one bowl it is too hard to describe here. 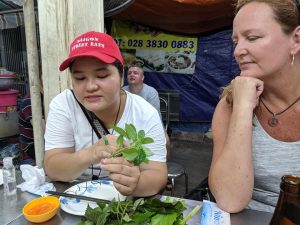 are with your surroundings than when you are in a car. We never felt unsafe with our expert drivers at anytime even with the crazy traffic all around us. In fact they actually kept the three of us together most of the time. Julie and I actually handed the Go Pro back and forth a few times along the way.

We pulled up to the next restaurant and the owner was cooking right in the very front. His specialty was the Banh Xeo. The owner would put some shrimp and pork in a pan and let it simmer a bit and then he would pour in a batter made out of rice flower. When 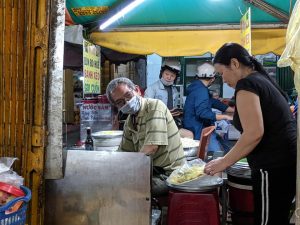 it all hit the pan it made a sizzling sound. He would then continue to cook it while putting in bean sprouts and other items and then he folded it in half like an omelette. When ours arrived at our table Su Le told us how to eat it. It is usually served in South Vietnam with a plate of leaves. One of them is big and wide and used as the main wrapper. You lay that on your plate first and then add in a few of the smaller leaves, including mint, basil, and one called stinky fish! Then you grab a portion of the Banh Xeo and put it in the middle. After that you roll it all up to create a spring roll and then dip into a sauce and finally you get to eat it. It is delicious and the amount of flavors that you taste at one time is awesome. We each had two of these and then it was time for our next stop which was right across the alley – Tam Ba. 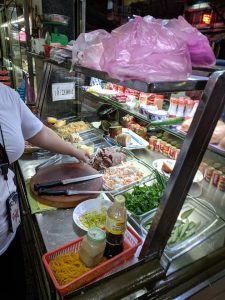 This place specialized in Banh Mi sandwiches. This is a delicious sandwich that was influenced by the french. The bread looks just like a french Baguette but is so much lighter. It literally is at least half as dense as a normal baguette. Banh Mi’s can have just about anything in them but a basic or classic one might have the following ingredients: Pâté, slices of roast pork, lots of local vegetables like cucumber radishes, peppers and of course secret sauces that probably include fish sauce. The cool thing is you can really have them ordered with just about anything. Lyn and I shared one classic one and Julie got the same thing minus the pate. So here we are standing on a corner watching the local life go buy eating our Bahn Mi sandwiches with our new cool friends from Saigon Street Eats. What could be more awesome?!?!? I know I know…how about a seafood course!!!!

Our final main course will be at a place that specializes in seafood. We all got back on the scooters and 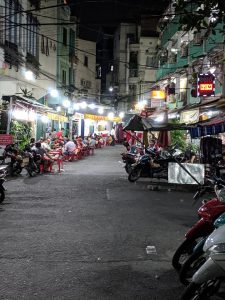 headed there. We went down roads, around corners, and even through a few alley ways. Finally we turned the corner and saw all of these people enjoying dinners and drinks. We found out from Su Le that all of the people were being served by just one restaurant. She took us to the place where all the cooking was happening while Mia went and got us a table. While Su Le was explaining everything we were just taking it all in. The cooking area consisted of pots filled with charcoal that the cooks would lay racks of seafood on. We saw clams, scallops, shrimp, snails and a few things we had never seen before. We all went and sat down. Julie asked if she could sit this one out because she did not like seafood. No problem, Mia went and got her a delicious dish that wasn’t seafood based. Meanwhile Su Le explained what everything was

and more importantly how to eat each dish. For instance the clams came in a little pot of savory clam juice. She told us to grab one set it on top to let it cool a few seconds then scoop up a little of the savory clam juice and then scoop up a little sauce and then slurp the entire thing down minus the shell ha ha. It was delicious. Next up we had scallops! They where still on the shells but had a few other ingredients added in as well. Su Le told us to pick it up add a drizzle of this special sauce and then eat the entire thing at once! Wowza this had to be one of my favorites. I think I ate four in a row pretending that I was still trying to learn the technique ha ha! Then we had some delicious crab legs and finally we had a Conch that had been cooked and placed back in its shell. You basically just grabbed the meat and put it in the 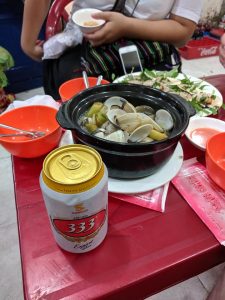 sauce. Awesome all the way around and I almost forgot we washed it all down with some BA BA BA beer!

I could have sat at this place all night but we still had one more place to go. We were headed for dessert! We got back on the scooters and headed down streets with markets and even stopped in the flower district where Lyn and Julie were presented with a flower! Finally we stopped at a food stall and ordered dessert. They had many smoothies and several concoctions that we had never seen before. 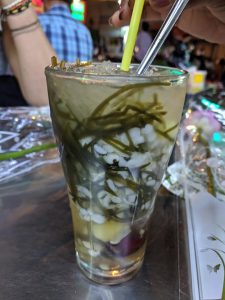 Lyn and I got two of the local dishes that reminded me of halo halo in the Philippines. Julie got a smoothie and everybody agreed that they were all delicious as tastes were shared all around. By now it was after nine and time to head home! We got back on the scooters and about 20 minutes later we were back at our hotel! We said goodbye to our new friends Su Le, Mia, and Vinh!

Even though we thanked them at the end of the night I want to give all three of them a special shout out here and say thank you again. This night has been the highlight of our trip so far! Thank you for taking such great care of us! We could not have asked for better hosts to see and enjoy this beautiful city.

After our goodbyes we went up to the hotel’s rooftop bar and had one drink before going to bed. One more thing we did all of this for just under 3.4 million Vietnamese Dong. That ended up being $49 USD a piece. It was worth every penny and more! Thanks for coming along with us and thanks for reading the blog! We have one more day in Ho Chi Minh / Saigon and then its off to Hoi An.