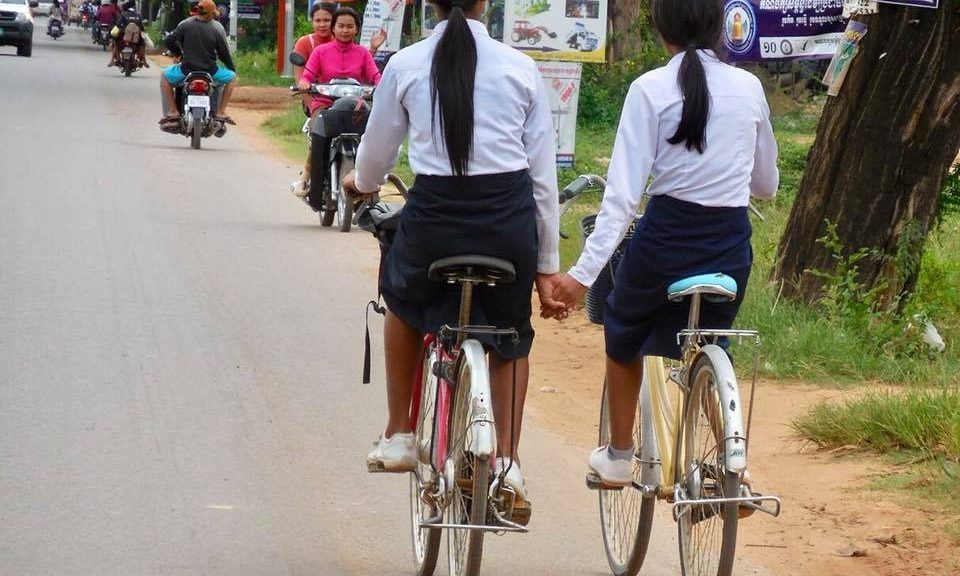 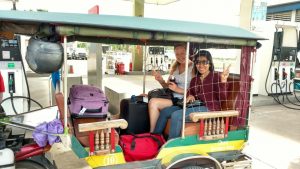 Today our flight was leaving at 9:20 so we decided to have one last rooftop breakfast at 6:45 and then head to th airport at about 7:15. We knew it would take about 30 minutes to get there and we were hoping that it would not take long to get our ticket and get through security. The ride there was just as fun and beautiful as it had been two days before. We sat back and just took it all in. Since we were going to Siem Reap and not leaving the country after we got our tickets we got to go to the domestic part of the airport. When we arrived at security we were just about the only ones there and made it through in just a few minutes. They had the usual signs that said no liquids guns knives etc. but this time the signs included no hand-grenade’s! Ok good to know! Once we were through we were greeted with a nice waiting area 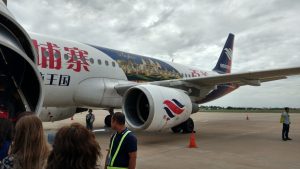 and something we rarely ever get at an airport fast free wi-fi! I was able to put the finishing touches on the last blog post. Today we were going to be flying BassakaAir. The flight was only going to be 45 minutes and cost only $81. But wait there’s more! That $81 was for all three tickets with all taxes and fees included. We really did not know what to expect at these prices but had read several good reviews so we went for it. After we checked in at the gate we boarded a bus with the rest of the passengers and headed to the plane. The plane looked a little older on the outside but we were met with a very nice staff and the plane looked great inside. Our seats where actually further apart and super comfortable. Somehow they even 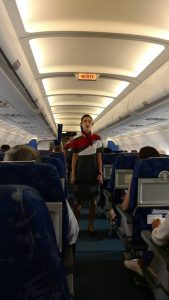 manged to serve free juice and water all for under $30 a person. Awesome!

When we landed we saw that the airport was small and it had a really cool feeling about it. Kind of like landing in the Key West airport if you have ever done that. This is one of the rare times that we already had our transportation worked out. Since we would be touring temples here I had read that it was a good idea to have someone take you around instead of just picking a random driver. The blog that I follow Millennial Revolution had traveled here and bragged on their driver so I had emailed them to get his contact information. I had contacted him several months ago. As it turns out he had a wedding to attend but said his brother Sophy Toun could take us around. I had read that his brother was good as well so I sent him our flight information on FB messenger and a picture of us. He said that he would be waiting with a sign with my name on it. Even before we exited the airport I could see Sophy holding a sign that said welcome Mr. Ben. He grabbed our bags and we headed to our Tuk Tuk. Before we got in he raised the back seat and gave us all a cold water! Have I told you that I love this place and its people!

We all got in the Tuk Tuk and we were off. The plan was to go to the hotel and try to check in early and then go out-of-town and visit the 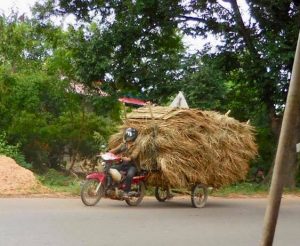 floating villages that are about 10 miles outside of town. We got to the hotel and our rooms were not ready yet so we just left our bags behind the desk and headed out with our new friend Sophy. As we went through town we noticed how much calmer and relaxed it was vs Phnom Penh. Still lots going on but on smaller scale. After the craziness of Phnom Penh it just felt relaxing. As we headed out-of-town the city life faded into countryside and we just sat back and enjoyed the ride. If you want to see a short video click here. Our trip to the floating villages had been a last-minute decision and we had not researched it at all so we really did not know what to expect. We just kept riding and riding and riding and after about an hour and 15 minutes we arrived at a ticket booth. Finally we must be getting close…. nope because it was not rainy season the water did not come up this far. We continued to ride down dirt roads with rice fields on the sides and finally we came to an area with a bunch

of boats. We did not even know we would be going on a boat ha ha.

The three of us got on a very old wooden boat that looked like it would hold about 8 people during peak season but we had it all to ourselves. The boat was very basic with a rope that was connected to the steering wheel and ran down both sides of the boat. We went down the river and could see all of the houses that were built on top of very tall stilts. It was really hard to imagine the water anywhere close to the top of these houses but apparently that’s what the rainy season looked like. If you want to see a short video click here. Finally at the mouth of the river there was a floating restaurant and we all had a drink and relaxed a bit 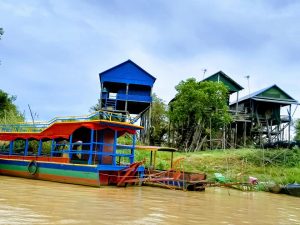 before going back. Julie even tempted fate in a hammock on the edge of possibly crocodile filled waters ha ha! After we arrived back our driver was waiting for us and we headed back to town to grab a late lunch. After about an hour and half we were being dropped off at Pub Street and were super hungry. Lyn and I decided to get a pizza which ended up being very good and Julie got Kung Pao chicken. Finally we walked back to the hotel which was less than a mile away. I broke our rule of Tuk Tuking everywhere and we were pretty sweaty when we got to the room.) When we arrived our rooms where ready so we checked in and settled in for a nap. This hotel only cost $20 a night! It has a free breakfast and although it does not have a pool you are allowed to use one of a hotel nearby. We feel like we are almost the only guest here as we have only seen a handful of other guest. Oh yeah and it comes with its own can of Raid! 🙂 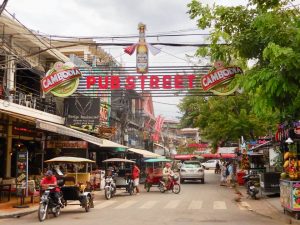 For dinner we decided to go back to Pub Street. Pub Street is really nice and has lots to see and do…….. and oh yeah the beer is only 50 cents a mug. We ended up going to a cool restaurant called “Easy Speaking”. We were able to get a table facing the street and as usual the food was really good. I noticed the restaurant had a music theme and plenty of old records and record covers covering the wall. I recognized one of the artist Pen Ran aka Pan Ron. In the 60’s and 70’s Cambodia was a happening place for Rock and Roll and Pen Ran was right there in the middle of it. She was super popular in the 60’s and early 70’s. She was known for her western style rock and her outspoken lyrics. When the Khmer Rouge swept through the city in 1975 and took over and 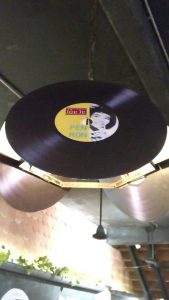 started their genocide she disappeared and was never seen again. This country has so many scars and yet the people have somehow made it through. There are reminders of it everywhere. If you want to see Pen Ran in action click here.

After dinner we walked through the markets and just took it all in. Finally around 11 we grabbed a quick Tuk Tuk home for $3. Love this place! Tomorrow we will go see Angkor Wat. It is a temple complex just outside of Siem Reap and is the largest religious monument in the world. As usual Thanks for reading!