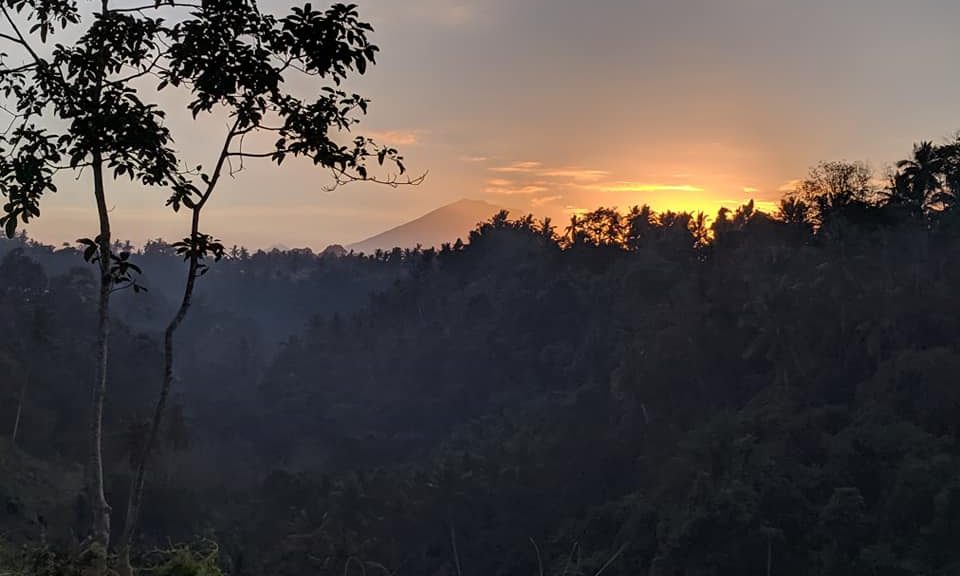 After a pretty good nights sleep we woke up around 7. (Yea us!) We decided to just hang out on the patio until the 8 AM breakfast and get caught up on Internet stuff. The cool temperatures continue to amaze us and we know they are short lived. Singapore is currently 97 and humid so we will take every day of this that we can get. Breakfast at our hotel is a simple affair. You can choose an egg cooked to order which comes with toast, coffee, and your choice of fruit or juice. You could also substitute the eggs and toast for pancakes or a Jaffle. I had to look up Jaffle and as it turns out it is made out of one of those sandwich makers like we have at home.. I had one the second day with bananas and it was delicious.

After breakfast we walked back to the markets to try to buy some clothing for Lyn. We were hoping that we could find clothes more her size since we were on her side of the world. As it turns out most every thing was too big since they catered to tourist. 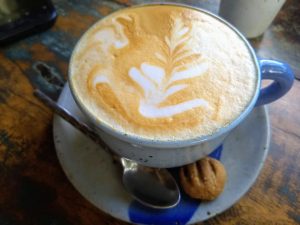 Lyn seemed to be in the sweet spot where all the adult clothes were way to big and the kids size was a little too small. We continued to walk around town and finally found a few shops that had clothes that fit. Lyn was in heaven trying things on and finally decided to purchase a few items. Yeah mission accomplished! We celebrated by going to a coffee shop and having a cappuccino at the same cafe we went to the day before. This time the upstairs was open so we went and got a seat looking over the street. While we were there several dogs came off the street and up the stairs for a visit. After getting petted by us and a few other customers they headed back out. I love the relaxed vibe here!

After coffee we decided to walk through a few more shops and ended up back at our local lunch place Warung Jawa Timur Bondowoso. We had a similar lunch as the day before with a few items switched out. Lyn saw that today’s offering included fish heads so she was a 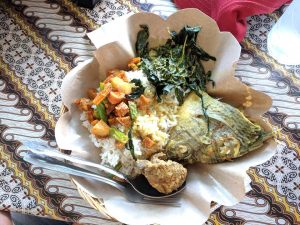 happy camper. Yummy?!?!?!?! On the way back to our hotel we saw several restaurants that looked good for dinner. We took pictures of them so we could look them up online later. When we got back to the hotel we decided to go for a swim in our beautiful hotel pool. The water was cooler than we anticipated but actually felt great after you got over the shock of it.

After laying out at the pool for about an hour we decided to head back to the room so we could take a short nap before heading out to dinner. We ending up going to Warung Ponduk Madu. Surprisingly they were known for their ribs. When we got there the entire place smelled like grilled ribs. Even though they had other great offerings we could not help ourselves and both ordered ribs and a couple of drinks. The place had a fun atmosphere with music and of course a great view of the street. The restaurant was situated on a pretty steep hill which made it hard for some of the scooter drivers to navigate and park their scooters. Many westerners rent scooters here and some seem to not have very much experience driving them. We saw many close calls but no one was hurt so all is well. I wanted to rent one here to go out and see the countryside but decided not to since I still had pretty good amount of jet-lag and they ride on the left hand side of the road. Probably not a good combination. We ended our dinner splitting a mango sticky rice and then waddled home to our hotel. Another great day in Ubud.

The next day would be the day we would leave Ubud and head to Kuta Beach. We needed to check out by 11. I had the great idea that we should get up early and hike or trek the Campuhan Ridge. (You can see a short video of it 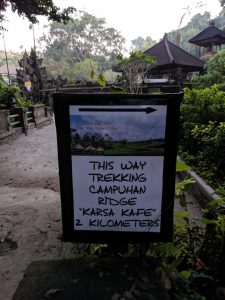 here.) So that is exactly what we did. The next morning we got up at 5:45 and were headed out the door at 6:15. This trek started about a 30 minute walk from our hotel. We decided to walk from our hotel and the trek the trail just a few kilometers to a cafe and back. The walk there allowed us to see the usual parts of Ubud and we actually got to see new parts as well. When we got the trail it is marked with pavers and there were already a few people there. It was a pretty good climb at first and then it flattened out at the top of the ridge and the view opened up around us. Beautiful!!!! We made it all the way to the Cafe only to find it did not open until 7:30 and it was only about 7:15. We took a lot of pictures and then just decided to head back. We actually made it back to the hotel at around 8:15. We already had over 14000 steps in and we were whooped and felt like we had earned our breakfast.

This morning I ordered the Jaffel instead of eggs and it was delicious. I had one made with bananas. It tasted like french toast with bananas and honey mixed in. Yum yum! We back to the room and got ready to check out. We needed to check out at 11. I had planned on using Grab (Their version of Uber.) 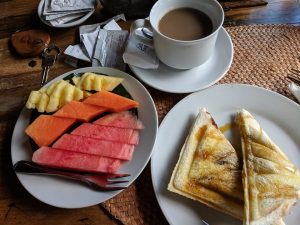 to get to Kuta beach which was about 1.5 hours away. Even though they are legal in Bali there are signs everywhere saying you cannot use them. Anyway I asked the young man at the hotel and his reaction was straight out of the movie the Godfather. Hmmm if you use Grab their could be trouble for you and that’s the last thing I want for you is trouble. He said I can call you a taxi. I said OK how much. I had already checked Grab and it was going to be 325,000 Rupiah so I asked him how much and he said 350,000 Rupiah which is only about 4 US dollars more. Since I did not want to bring “trouble” to myself I paid this $4 mafia tax. Anyway he said the drivers car could not make it down the narrow street as it was an SUV and then we would have to meet him at the end of the street. This is the same corner where all the taxi drivers hit you up for rides. He said no problem. just look for the driver in the white shirt. So of course we come to the corner and start talking to the first driver in a white shirt that we saw but then we saw at least three other drivers in white shirts. Luckily one of them walked up and quoted our hotel and the price. Next thing I know we are headed out in a pretty nice SUV with no seat belt holders to clip in to. The driver was super nice and we just sat back for about an hour and half until we reached our hotel in Kuta Beach. To be continued………….