So we arrived at Kuta beach in time for Lunch. The hotel we were staying at was on the beach but you still had to walk a couple hundred 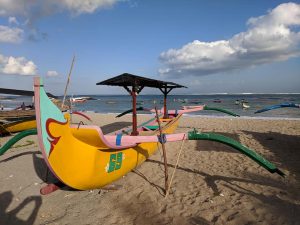 yards to actually get on the beach. The hotel was called Sulis Beach Hotel and it was about $70 a night however it was free to us since we had been busy over the last year accumulating credit card sign hp bonuses. It was really nice room with a roof top pool and eating area. We walked over to the beach and noticed a lot of small boats and that the breakers where way of the beach line. Apparently it was a popular surfing area and the boats would take the surfers out to ride the waves that were breaking on the reef. 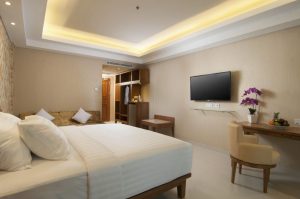 We went around the corner from the hotel and and ate at a place that basically dumped a bunch of seafood in front of you on a plastic table cloth and gave you plastic lunch lady gloves to wear so you could just dug in. This actually ended up being a not very good meal. Not really a lot of seafood and instead of flavor just a bunch of sauce. Anyway we have had so many great meals one bad is not going to ruin our track record.

Unfortunately I had actually woken up with a sore throat this morning before our trek and it had been getting worse throughout the day. Due to this we pretty much laid around our room 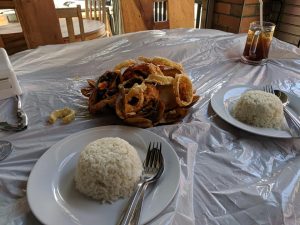 the rest of the day. We had a late dinner at the hotel and then the next day would be our travel day to to Singapore. I had picked this hotel because it was only about 15 minutes from the airport and they had a free airport shuttle. (Take that taxi Mafia.) 🙂 Anyway we slept great and the next day I was feeling much better we ate a hotel buffet breakfast that was included in the room. Many selections to choose from and made to order omelettes made a great start to the day. We went to the beach one more time and took a few pictures. Then it was off to the airport around 11 to catch our flight.

Our flight was not until 2:30 but we wanted to get their early so we could visit the lounge get a free lunch, work on the blog and then catch our flight. We are loving our free lounge passes so far. Thanks American Express Hilton card! . Today we would be flying Scoot airlines which is a budget no frills airline owned by Singapore Airlines. We actually arrived about 15 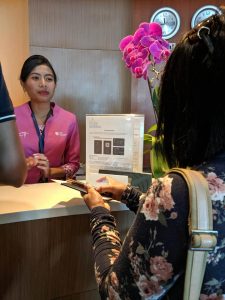 minutes before the scoot counter opened so we had to wait to be checked in. Once we were checked in we headed straight for the Premiere lounge. Lyn checked us in with her free Priority Pass and the next thing we knew we were situated in two big comfy chairs with fast wifi and lots and lots of food choices. Oh yeah and free alcohol as well. We really enjoyed the lounge and it is nice to be able to come to the airport early and look forward to enjoying a lounge before flying out. Finally about 1:30 we headed to our gate and boarded a little before 2 PM.

The plane was fully booked and was nice and the staff was great as usual. Really non frills really just meant that you would have to buy your food and drinks if you wanted to. After just a few hours we landed in Singapore. We landed with hundreds of other people from other places so getting through immigration took about 25 minutes. Once we we were through and had now bags to pick up we were out the door and on our way. (There are perks to traveling light!) Before we left Bali I had decided to order Sim cards for our cell phones so we would have local numbers and more importantly Data in Singapore. This would allow Lyn to call her friends and relatives and give us easy access to google 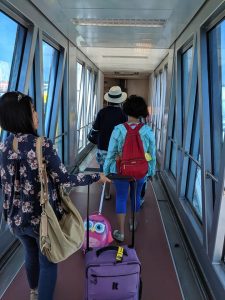 maps and looking up attractions on the fly. I had learned about a company called Klook. The way is worked is I ordered the cards and paid for the Sim cards online. Then they sent me confirmation and told us where to pick them up. We arrived at terminal 2 and that was the same terminal they had a store. We went in should them our QR code on out phone and the store put them in for is and made sure they were working properly before we left. So for about 12 Sing dollars about 9 US dollars each we had phones that had 100 GB’s of data plenty of local calls, texts and even 30 minutes of International calls. Not too shabby.

Now it was time to find the MRT (Mass Rapid Transit) to Little India where our hotel would be waiting for us. We followed the signs to it and for $20 Sing dollars each we had three day passes that would allow us to ride buses and the MRT anywhere we wanted. It is super easy to navigate and after a 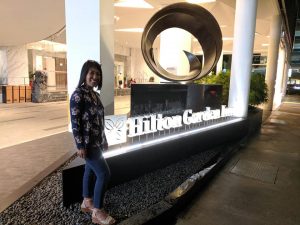 couple of quick train changes we were checking into the Hilton Garden Inn in Little India. We stayed here last year and really loved the location and the vibe. After checking in we went to a very local Indian restaurant  and had a delicious dinner before calling it a night. By now it was already 9 so we called it an early night. Tomorrow is a big day as Julie will be meeting us (She actually gets in at midnight tonight.) and Lyn’s relative Tessie will be joining us for an all day adventure in Singapore. We have a pretty big agenda so we will have to see how it works out. Thanks for following along with us!