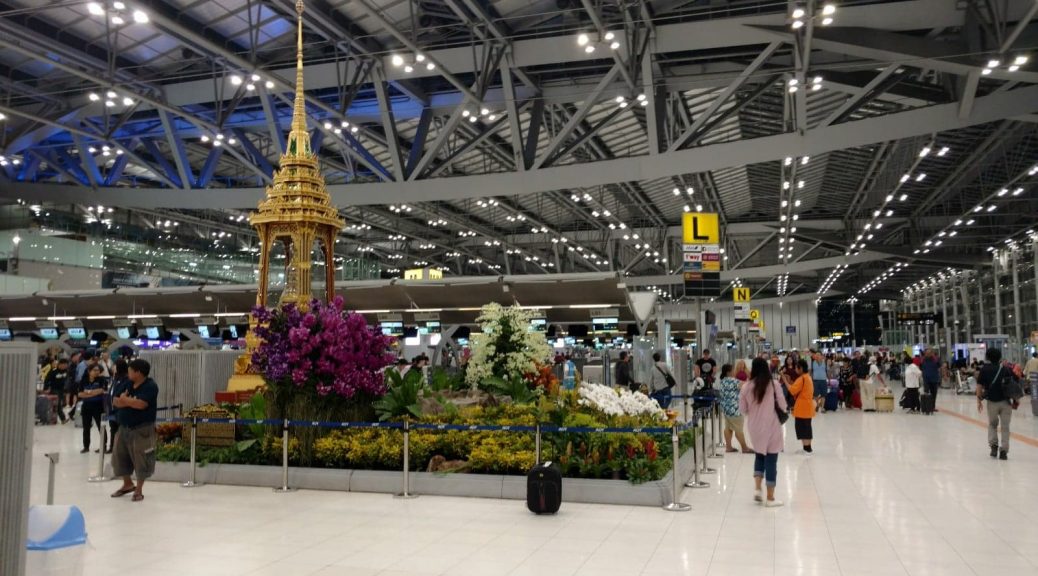 After going to sleep about 11 we needed to get up at 4 AM to catch our 7 am flight to Krabi. Usually 4 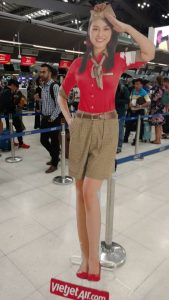 AM is crazy early but since we are struggling to get in the right time zone we were all three awake before any alarms went off. We got our act together and caught a cab using the Grab app and were on our way by 5 AM. We arrived at the airport at 5:30 and had no problems checking in for our flight on Vietjet. (I think this flight only cost about $28 dollars each.) They weighed our bags and everyone passed the weight limit. By the way. They never weigh my duffel bag. I guess it looks small and is easily placed in the over heads. We made it through security in about 10 minutes and then stopped at a McDonald’s for breakfast. They actually served porridge with pork in it and Thai chilli sauce on the side. Lyn was in heaven. We both had it and a couple of coffees and we were on our way. Julie had a more traditional breakfast of sausage McMuffun and hash browns. We went to the gate only to find we had to ride in a bus to our plane. We rode and rode and rode. Through tunnels inside of buildings and past many other jets on the tarmac. Finally after about 10 minutes we finally arrived at our plane. We climbed the stairs and within about 10 more minutes we were airborne and on our way to Krabi. The flight was only going to be an hour. This flight was super economy and if you wanted anything you had to pay for it. Everyone was super nice and after an uneventful hour we landed in Krabi.

At this point we needed to buy van tickets to our hotel in Koh Lanta. The van ride was supposed to be an additional 2.5 hours and you could book straight from the airport or take a cheap van to Krabi and book it from there. I had read that it was better to go into town and book from there so that is what we did. The Van driver asked me where to drop us off and I had no idea really so I just said downtown Krabi. Hmmmmm surely we can figure this out when we get there right!?!?!? After all we are seasoned travelers right?!?!? As we got out of the van I clearly could see that I had no idea what I was doing but Lyn and Julie had no idea that I had no idea yet. So after they took a few pictures I told them that we needed to find a place with WiFi so we could figure out a plan. They were totally 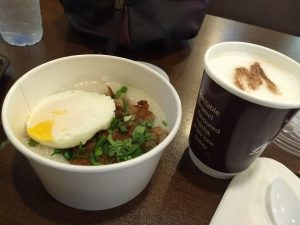 cool with it and we all decided that we should find an ATM and then a coffee shop in that order. We quickly found an ATM and after loading up with about $5000 Thai Baht each ($5000 Thai Baht equals about $150 US dollars.) we started to look for a coffee shop. About this time Julie decided to trip and went flying flat on the sidewalk with definite popping sound that came from her ankle or knee. She got up slowly and said that she thought the fall actually gave her more flexibility so all was good and we proceeded to look for a coffee shop. By this time we were getting hot and starting to sweat so it felt really good to get inside and cool off. Finally after looking online and not seeing an obvious answer to our problem I got the waitress involved. About three sentences later we found out that we did not understand a thing we were saying to each other. She did motion for me to follower her. She went out the front door to a hostel next door and left me with a lady who spoke a little bit of english and I told her our dilemma. Anyway the next thing I knew after 3 phone calls I was paying her $1500 Baht ( About $15 US dollars a piece.) and was pretty sure that a van was coming to the coffee shop in about 30 minutes. I also had an official piece of scrap paper that said I had paid. (BTW had we gone straight from the airport it would have been about $300 baht less ha ha.) Remember I am free of charge tour guide and you pretty much 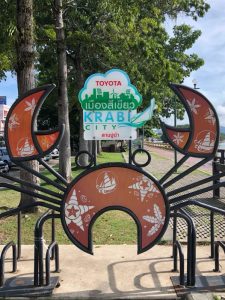 get what you pay for. 🙂 After about 40 minutes we get in a van with a driver that spoke no English and about 6 other passengers that he had already picked up. Finally by 10:15 we were off to Koh Lanta! Wait not so fast…..after about 10 minutes we were stopping and picked up two more passengers and then we stopped again and picked up a package, then another and finally his daughter joined us at yet another stop. So now that the van was full we were on our way. We drove for about an hour and 15 minutes and we finally came to a ferry. This ferry was pretty small and all of the cars, vans, trucks, and scooters just crammed on there. They were so close together there was no room to get out of the van so we just rode inside the van with a great water view. Some of the drivers did get out to smoke in an area that had no smoking signs and four fire extinguishers that looked like they were from about 1980. Yikes! So while we rode along the three of us developed an escape plan in case something went wrong. If the ferry started to sink the plan was for Julie to grab Lyn and put her on top of the car next to us. I would climb back three cars and grab an inflatable Michelin man that was tied to the rack of a truck behind us. Then I would come back and get them and we would float to safety. Pretty solid plan if you ask me. 🙂 As it turns out our plan was not needed and the ferry docked just fine. We were back on the road heading to our hotel but wait you remember the packages right? Well you guessed it those had to be delivered first. It felt like we were riding in a mail truck just waiting our turn to be delivered. Anyway after about two and half hours from the time we got picked up we made it to our next home The Lanta Miami Resort. 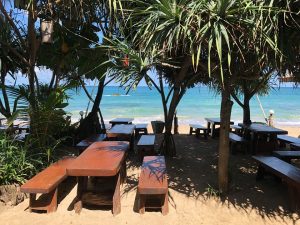 It was actually super cool and windy but it felt great. We were greeted with fruit drinks and helped to our rooms. I will have to say these rooms are really nice and they match their internet pictures perfectly. After we got settled in we decided to take a little tour of the place. It was charming to say the least but the weather was really bad with wind and rain. Not even the kids were swimming in the pool. We decided to eat lunch, then take a quick  nap and then meet again afterwards. Well the jet lag kicked in and we ended up sleeping from about 3 to 6 PM. Yikes not part of our plan but it did feel good. We got ready for dinner and headed out about 7. We decide to eat at our hotel since lunch had been so delicious. The weather had cleared up the temperatures were perfect. We got an ocean front table and really enjoyed the great view, food and company. About 11PM we called it a night. Tomorrow the plan is to go to Old Town which is about 20 minutes away. Hoping to rent scooters but will have to check on the weather. Thanks for following along!

Below are a few more pics of our day!