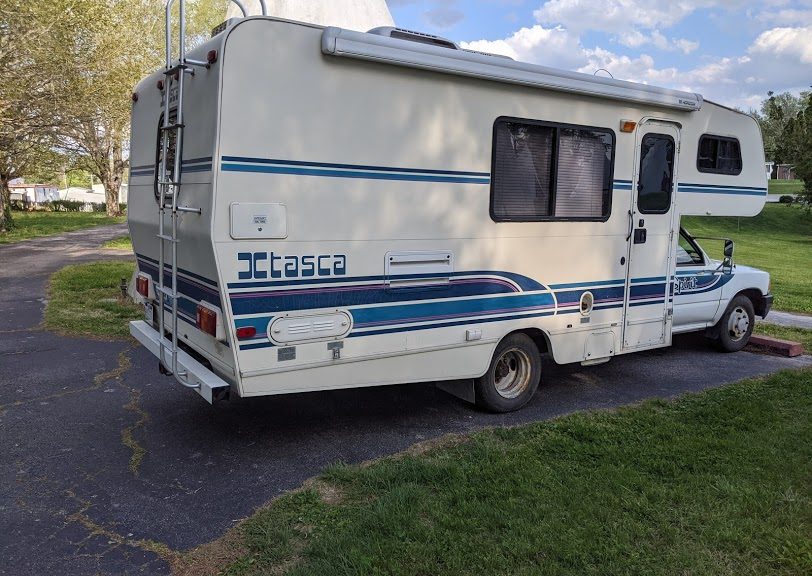 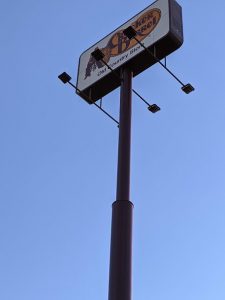 So after having a great time with family and friends it was time to head back out west. On our last trip out we got as far as Albuquerque, New Mexico. That is a great jumping off point for many of the locations we still want to visit. I noticed that Mesa Verde National Park was only a about 40 miles north of Albuquerque so we decided to head there but this time go right through the center of the USA with a few stops in between. This would give us a chance to take a route that we had not done before and stop and see a few interesting things along the way.

We did not leave North Carolina until about 2 pm so the plan was to just drive about 5 hours and spend the night at a  Cracker Barrel along. So that is exactly what we did. We pulled into a very nice Cracker Barrel in Sevierville, TN around 6:30 PM. We usually either buy dinner or breakfast when we spend the night. Tonight Lyn fixed dinner as we planned on getting breakfast the next morning. While Lyn was fixing dinner I was out walking. Since my knee surgery I am trying to get at least 10,000 steps every day. Of course when driving this can be problematic and usually means I have to walk a lot at the end of the day. As I walked around it was amazing to me just how well the landscaping was done and what a great location this was. I finally got my 10,000 steps 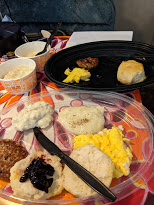 at about the time Lyn was done fixing dinner. It was delicious to say the least. By now it was 8:30. and time for a little TV and then off to bed. While home we bought a small Lithium battery pack called a Jackery 300. It allows us to plug the TV in and charge all of our devices at the end of the day. I have been surprised how well it is working. We can recharge it by plugging it in to an electrical outlet or just plugging it into the dash lighter while we are driving. We can also use our solar panel to charge it while we are camping.

The next morning we ordered breakfast and brought it out to the RV to eat. Yum yum! Now it was time to head up to Kentucky and visit Mammoth Cave National Park. We had never been there and wanted to mark it off our list. After about 4 hours of driving we were there. I was a little nervous about my knee because there were 160 stairs and about 2 miles of uneven surface in the cave. At this park even though we have a National Park pass it still cost $23 per person. Anyway we were able to get on the next tour and only had to 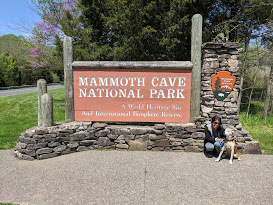 wait about 5 minutes. After going down the stairs and walking about a mile I realized that my knee was doing just fine. Boy what a game changer. Anyway the cave was unique but after visiting Carlsbad Caverns it was some what of a let down. It was very dark and because they were not doing ranger led tours we did not get to hear a lot of the history. Still worth doing but maybe wait til they have tours again. Anyway after touring that we went and dumped our tanks and filled up with fresh water at the park dump station.

Cave city was only a few miles away and I had learned from a Youtuber called the Nomadic Fanatic that one of the original Wigwam Villages was located there. I thought the only remaining ones were all out West. This particular one was built in 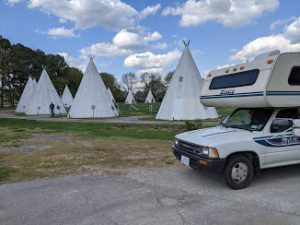 1937. Even the furniture inside is original. The new owners purchased it last fall and are doing a great job bringing it back to life. We decide we wanted to see it and after pulling up we knew we wanted to spend the night. We talked to the new owner and he gave us a rundown of some of the history and said all he had left were rooms with two beds but that he would give it to us for the price of a room with one bed. Sold! We will take it! He also said we may not be able to fit our RV next to our Wigwam because it might block part of the driveway circle. We pulled in and parked and thanks to our small 20 foot RV we fit with 2 inches to spare. The room was really neat and they look just like a Tepee made out of cement. It was actually pretty spacious inside and except for the addition of a flat screen TV and WiFi it seemed very original. All of the rooms are in a semi circle with chairs out front. They have a big playground and two fire pits as well. Anyway if you ever have a chance to stay in one I would say it was totally worth it. 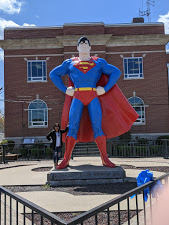 We woke up the next morning and it was our 10 year wedding anniversary. I had promised Lyn a “Super” day to celebrate so we headed over to Metropolis, IL. Of course we all know that was were Superman lived so we were going to go see what his hometown had to offer. It was only about 3 hours away so it would be an easy driving day. We headed straight to Superman Square and were greeted with a 15 foot tall statue of the man of steel! The entire area was quirky and fun so we took our time walking the streets and had lunch at a very cool Mexican restaurant. The entire inside of the restaurant had been painted by one artist and the detail was crazy. After lunch I had read that there was a Sate Park called Fort Massac State Park. They had a campground that was only $18 a night and it had electricity. They were doing a lot of construction building new bath houses but since we have our own it did not affect us at all. We decided to stay two nights. We spent our non-travel day 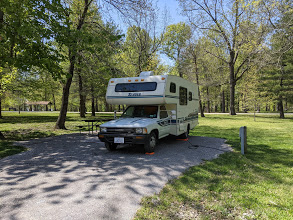 exploring the park and catching up on all internet related stuff.

Our plan from here was to head straight through Kansas as it was the shortest route to Mesa Verde National Park. This would have us going right through Topeka Kansas which is home to the Evel Knievel Museum. Growing up in the late 60’s and early 70’s this was the man to watch. He was probably better known for the jumps he crashed  then the ones he landed safely. One of his most famous crashes was at Cesar Place in Las Vegas. You can watch it by clicking here. We arrived at the museum and it was underneath a Harley Davidson Motorcycle shop. The museum 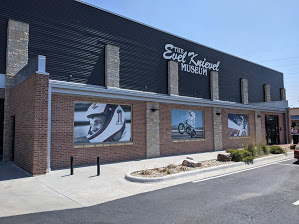 itself was awesome in about every way. They had so many original items and really cool videos that I could have spent hours in there. Anyway if you ever watched him and you are anywhere near Topeka I would highly recommend this as a stop. Next we stopped at the Oz Museum which celebrated the Wizard of Oz of course. They had a lot of neat original artifacts from the movie and it was definitely worth the $9 admission price. We walked around town and then it was time to head for our home for the night at Milford Sate Park. We found a great spot near the water and called it a night.

The next morning we headed to see the Worlds Largest Czech Egg. While heading there we almost ran out of gas. It was very windy that day and we hand a head 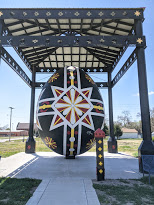 wind all the way. When we finally pulled into Wilson Kansas,  we put 16 gallons in our 17 gallon tank. That means we could have only made it about 10 miles more. Yikes! Anyway after filling up we checked out the Egg and the town of Wilson. The town had a cool vibe but it was deserted and pretty much had seen better days. After checking everything out we decided to make an easy day of it and go camp in Wilson Lake State Park. We were able to get a water campground site and really enjoyed the views. Once night time hit the wind really picked up and we had 25 mph winds all night. The forecast for the next day was more of the same with 40 mph gusts so we decided to head on to Colorado and try to get out of some of this wind. You have to remember we are basically driving a big old square box down the highway and we feel every bit of wind that comes our way.

After making our way to Colorado I had a found a reservoir on I-Overlander that let us camp for free. It was called John Martin Reservoir. They had a campground but if you had a self-contained RV you could camp in a free area. It turned out to be just what we needed after a long day of driving. We found a spot watched the sunset and then watched a little 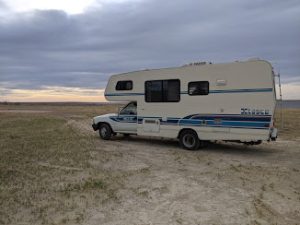 TV with dinner and called it a night. The next day we drove to the base of Great Sand Dunes National Park. We had been there before but thought it would be fun to see again. There was some BLM land on the way so we stopped there on the way to the park. This was a big area with great views all around area. They had multiple areas where you could just pull in and camp for free. We pulled in about 5 and just took it all in after sunset we had dinner and watched a little TV and hit the sack. It was going to get down to about 29 so there is no sitting around outside and enjoying nature just yet anyway. We woke up in the morning had breakfast and headed into the park. The park is really unique at the base of the mountains it has these huge sand dunes. We went to the visitor center so Lyn could get her National Parks passport stamped. Then we headed to a viewing area and finally we were able to dump our tanks and add some freshwater to our water tank.

From here we headed to Pagosa Springs Colorado.  It was on our way to Mesa Verde NP and we had heard that it was a cool 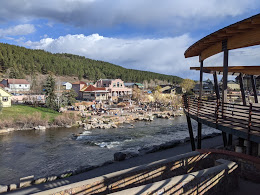 town that had free hot springs in the middle of town. We arrived around 5 and parked right downtown. On the suggestion of a friend we bought dinner to go at Mee Hmong Cuisine Restaurant. We ate it in our RV while over looking the hot springs.  Even though it was getting cold outside I wanted to try the hot spring so I got my bathing suit and headed down the path to get in. Lyn came along but only put her feet in. While we were there a local dog named Zeke walked right into the hot tub and joined me. After a quick soak we headed to a restaurant down the street that allowed RV’s to park in a gravel lot for free. We spent the night there and got a take out breakfast the next morning and headed back to the hot spring. It was chilly out but it felt so good when we got in the spring. After about 45 minutes we got out got in our RV and headed to Mesa Springs National Park. As usual thanks for following along.