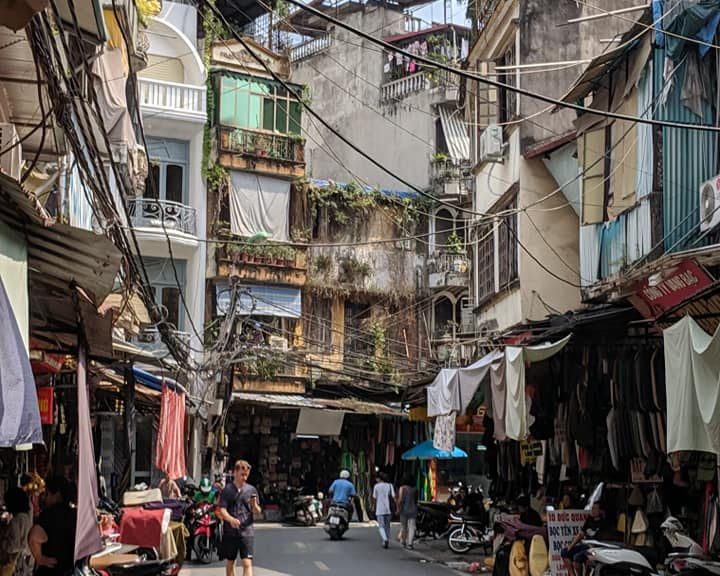 Well in an order to catch up the blog I am going to put all of our time in Hanoi in this blog post. Although we only had two days here we 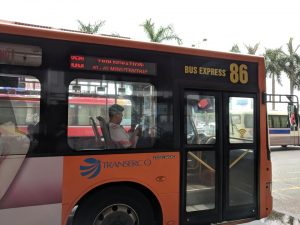 really loved the vibe and think from our limited travels that it may just be our favorite place that we have been to in Vietnam. That’s saying a lot because we have loved every place so far. We landed in Hanoi about 3:30 and decided to take the city bus to our hotel. I had heard that it was easy to find and left every 30 minutes from the airport. It would take about 25 minutes longer than a taxi but would be about $20 cheaper and a whole lot more fun.

When we arrived the bus was there and we caught it right away. It had A/C, WiFi and a conductor who took our money and also reminded us when to get off. We got off at the 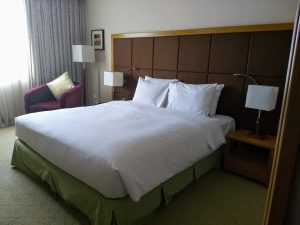 Opera House stop and walked to our hotel which was only about a 7 minute walk away. We arrived at our hotel the Hilton Garden Inn and were told that they had upgraded us to an 8th floor room with a great view and threw in breakfast to boot. Oh yeah they also gave us two free drink coupons and told us we could use there washer and dryer for free. Hmmmm was that last comment any reflection on haggard look?!?! Either way this place was going to be great. This room would be free to us thanks to our Hilton American express Card that we mentioned earlier in the blog. It is the same one that has been giving us free access to the airport lounges. Anyway after we settled in I found out that we had a filtered ice machine right across from our room. I have really not had any ice on this entire trip and I would have to say it was heavenly!!

We decided to walk to Old Quarter as it would give us time to walk by a park called Turtle lake. It was beautiful. Once we got Old Quarter 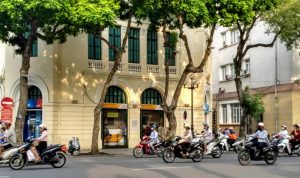 we decided to let Lyn do some shopping. We were finally in a place that was known for great prices, pretty good quality and finally a place where Lyn could by stuff without having it altered. The plan is to buy a suitcase since all of our remaining flights are International and having a checked in bag will be free. This will allow us to get her some clothes and also buy some souvenirs here and in China something we shy away from since we travel so light. By now it was dinner time and we decided to go with a recommendation from the couple we follow on Int Affair. 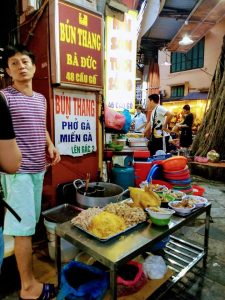 They recommended a place called Bun Thang Ba Duc. This place was a true hole in the wall where the food is cooked up front and served to you on the second floor. You literally walk down a hallway that is more like a tunnel turn a corner go up some poorly lit dingy stairs and then into a room where everyone is eating. Like I said our kind of place! We sat down and only had a choice of three things so we ordered a bowl of “Chicken soup” with a bowl of bread that you can dunk in your soup. All this was washed down with water and beer served over ice. After ours was served a food tour group came in and they were a rather large group and they all had on matching watermelon shirts and pants. Ha Ha so much for eating like the locals?!?!?

After dinner we walked the streets and ended up at beer corner. which is where  several restaurants intersect. We had a few drinks and just watched life go by. It was awesome. We had heard that they 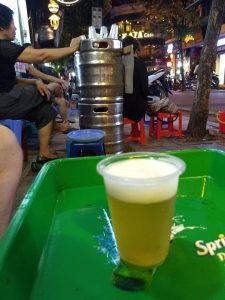 had a place nearby that  served beer for about 20 cents straight out of a keg. We found it and just sat down for the novelty of it. While we were sitting there a police truck rolled up and the next thing I knew the owner was picking up her small tables and chairs and then as soon as they left she put them back out. She spoke enough English to say she was only allowed to only have a certain amount of tables out so she had to put them up when the police came by. After making a few video calls to friends and family back home we headed back to the hotel for the night.

The next morning we had a big free breakfast at the hotel and headed back down for some serious Lyn Shopping. We also wanted to see the area called Train street. We took a Grab car and headed down to the Old Quarter and right off the bat Lyn found a few things. We went to a street that sold nothing but 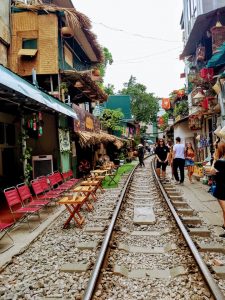 shoes and Lyn literally had two pair in the first 15 minutes. They cost $12 each and looked pretty well made. Only time will tell. We decided to head down to Train Street for lunch. This is a market that a train actually comes right through and about four times a day and the market and the people have to get out of the way. On the weekdays the trains only run at night so we did not see them but we did get lunch and watched all the people go by. All of a sudden a little dog came up looked like he was saying “Hey you all look like you miss your dog Jasper from home. How about petting me to make you feel better!” Luckily he spoke the universal language of “Dog” so he was very easy to understand.

We went back to the Old Quarter to do some more shopping and Lyn found a store that she loved so she loaded up on clothes. We decided to have a smoothie at a coffee shop on one of Hanoi’s favorite busy streets to watch. The coffee place is on a roof top and you can watch all the traffic and people 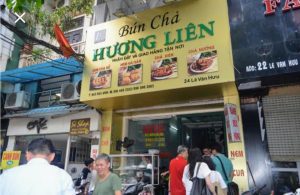 below crisscrossing effortlessly and chaotically all at the same time. I heard a quote sometime back that Hanoi was best described as “Beautiful Chaos”! I would have to say I could not agree more. Now we needed a new suitcase to carry all this stuff home. We found several stores and we were impressed with a “Samsonite” knock off suitcase. It seems somewhat well made. Hopefully it will get through our trip to China and make it home in one piece and with all four wheels still on. We paid about $25 USD for it. We took another Grab back to the hotel.

About dinner time Lyn remembered that somewhere in Hanoi there was a restaurant that Anthony Bourdain had lunch with then President Obama. It was called Bun Cha Huong Lien We looked it up on Google maps and it was only about a 7 minute walk away. We walked there and went in. They had several pictures 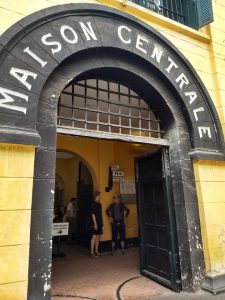 there of the two of them eating lunch and had encased the chair and table that they ate at in plastic. It was mostly locals eating there and we ordered the Obama set and split it. It was the perfect amount of food for two people and even came with a beer. It was really good. Finally we walked back home had our two free Hilton drinks and called it a night.

The next day we had one more thing on our list to see and that was Maison Centrale prison also known as the Hanoi Hilton by POW’s of the Vietnam war. We learned the harsh history of the prison from the Vietnamese perspective. It was interesting and eye opening to see the conditions of the prison. I cannot really see how anyone survived it but they did. As most of you would already know this is where John McCain spent five and a half years during the war. Some of the original prison was still there but a lot of it had been torn down and replaced with commercial businesses.

Tomorrow is finally the day we leave for China to visit the cities of all of our International students that we have hosted over the last 6 years. Excited for sure. Thanks for following along.