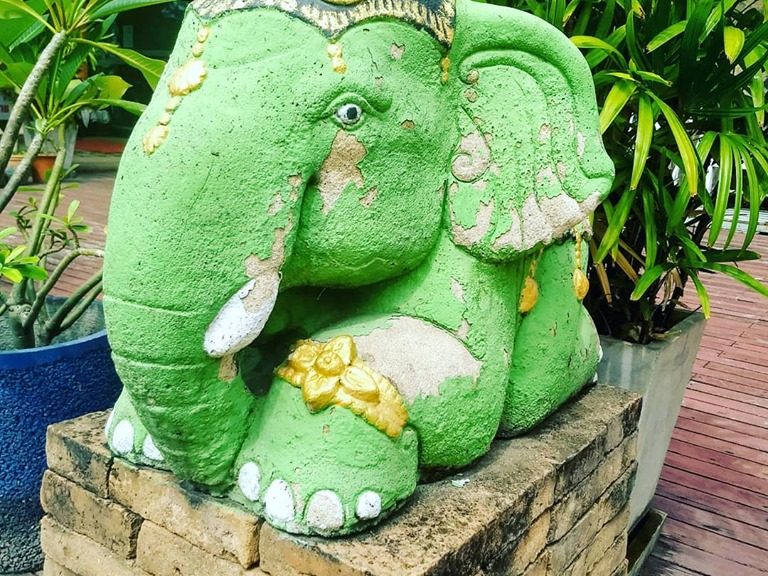 Today we decided to go local by eating every meal from street vendors or little hole in the wall places that only locals ate at.  We also planned on touring Temples or Wat’s as they are called here.  Around 9 AM we left the hotel and literally walked around the corner and there was a busy market were locals were buying vegetables and meat to cook back home as well as many cooked foods to eat right there. We walked through the market which just got bigger and bigger as we went along. After seeing all of the yummy goodness Lyn and I bought three Pao (Boa) for breakfast. Two of them were filled with pork and one was filled what tasted like egg custard. We then saw a lady making tiny omelettes with green beans in them and and finally grabbed two coffees complete with condensed milk. All of this for 70 Baht which is about 2.25 USD. That’s two breakfasts for that price. Yum yum. 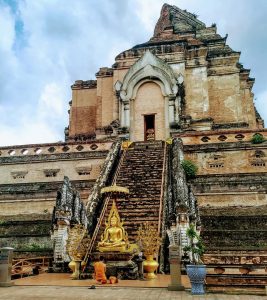 After that we started our walking tour. We planned on visiting as many temples as we could in the ancient city as we could take. They are all so beautiful but after a few hours of this you get “templed” out and cannot take any more. All of the temples are so ornate and detailed. Some you just walk into and no one is there and others are true destinations with worshipers and tourist alike. Most have basic dress codes like covering your shoulders and making sure pants and skirts cover the knees. I was wearing my cargo pants that have zip on long legs that I can easily add or take off. They rent sarongs at a cheap price if you come unprepared so most everyone gets in. All of the temples were beautiful but one really stood out. It was called Wat Chedi Luang and it was over the top cool in just about every way possible. Parts of the structure 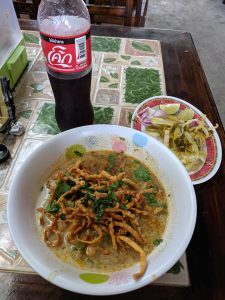 were originally built in the 14 hundreds. Part of it looked like it was straight out of an Indiana Jones movie. We spent several hours here and finally when done we were officially “templed” out and decided to head back to the hotel and take a break. Across from our hotel was a little hole in the wall place that had a certain charm about it. Lyn and I decided to have a late lunch there and Julie headed back to the room. I got the usual Khao Soi and Lyn got a bowl of Wanton soup. We both enjoyed the food and our total price was only 80 Baht. About $2.60 total for the two of us. Yummy and cheap…..my kind of place. We went back to the room got a few internet things done and then headed back out around 6 PM. 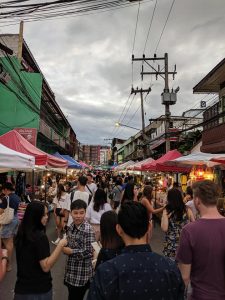 This time we would be having dinner at the Saturday night Wau Lai Walking street. This one is supposed to be slightly smaller then the famous Sunday night Walking street but still large by almost any standard. The walking street is a street with many off shoots and they close off all of the street to local traffic. Vendors set up their stalls and sell food and all kinds of other items. It is so interesting to walk down and see all of the interesting items. Some we have seen before but others are totally unique. The weather was perfect at about 78 degrees and we walked there from our hotel and about 10 minutes we were right in the thick of things. All kinds of vendors were all around us. Right off the bat i bought some dumplings. They were super 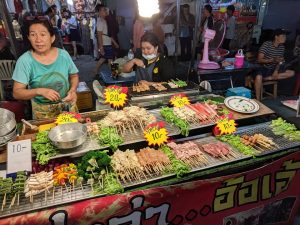 yummy and served 5 to a plate. I love the serving sizes because they are small and shareable so you can try lots of different things. We walked and we walked  and walked and walked checking out vendors and buying a few things here and there. Finally we came upon a full on food court area. So many things to choose from. Lyn and I got some fresh grilled satay and Julie got some pot stickers and that along with a few beers hit the spot. For all three dinners we probably only spent about 400 Baht which is about 13 USD and included 4 beers. We walked around some more and bought a few more souvenirs and then walked home for the night. By now it was about 10 and time to call it a night.

As you can probably tell by now I am falling behind on the blog. In an effort to catch up I am going to just hit a few highlights of our last two days in Chiang Mai.

We went back to Nimman road and found several cool areas that we missed the first time we went.

We went to the Sunday Walking Street market and it was even bigger than the night before but with a lot of the same vendors. It started to rain a little so we walked to a fancy Restaurant called FACES. It was decorated in a crazy cool way and was expensive for Thailand but not bad when you think how much eating out cost in the USA. You are really paying for the ambiance and this one really had a lot of it.

Today was a pretty chill day we just walked around Chiang Mai checking a few places that we have not been to and Lyn and Julie did a little more shopping. We had lunch at a place called the Chill Garden which was very laid back. Lyn and I actually got pizza and Julie got spring rolls. After lunch we had another massage and then headed out for dinner. For dinner we went to a very cool place that Julie found called Nun’s. It was truly a hole in the wall with only about 5 tables but it had a 5 star rating and really did live up to its name. After that we went to Johns and had a drink on the roof top and just watched life go by while enjoying each others company.

Tomorrow we fly to Ho Chi Minh Vietnam. (Saigon) We have all never been to this country so we are excited. Thanks for coming along with us!