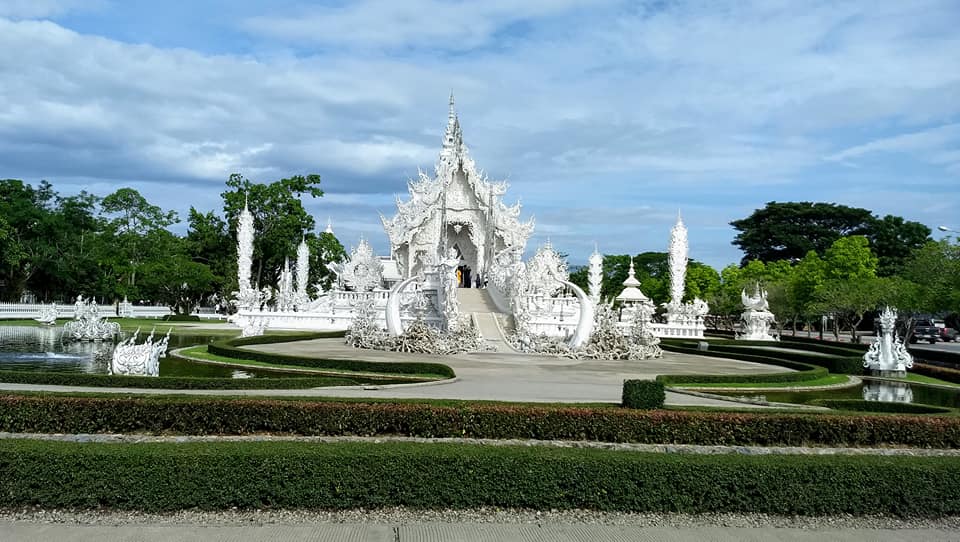 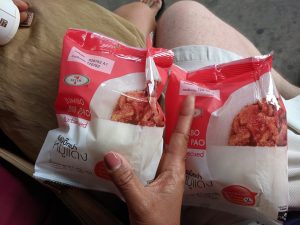 out on the day we wanted to go. So we were excited for this morning. The plan was to catch the local bus in all its glory and ride it to the temple at 8:15. We got up in plenty of time to grab a bite to eat and head to the bus stop. Breakfast was not included at this hotel so we decided to get our breakfast in the 7-11 right across from the bus station and have breakfast on the bus.

We got to our bus and we still had about 10 minutes until it left. We decided to get on anyway and take in all of its ambiance. The bus was rusty from one end to the other but had all kinds of character. I especially liked the way the entrance door that was right next to my 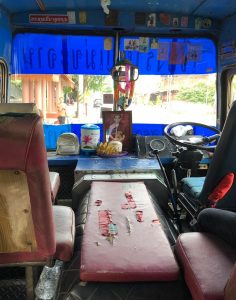 seat by the way was held wide open at all times by several bungee cords. I am thinking that this was just another safety feature so in the event of a crash we would all have one more opening to get out safely. The bus only cost 20 Baht which is about 60 cents in US money. The bus stopped for anyone that waved it down and we still made it to the temple in about 25 minutes.

We got out and crossed the highway and right before us was the White Temple. It is actually called Wat Rong Khun but everyone just refers to it as the White Temple. It was truly a destination with small shops and restaurants around it. The temple cost 50 Baht to get in for foreigners and free to the Thai people. Lyn had her dress on that she 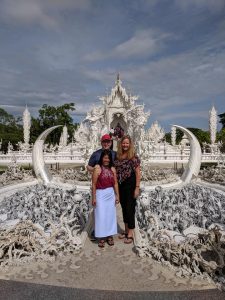 bought in Singapore but because it was just above the knee she had to rent a skirt to go in the temple. The temple was even more grand than the pictures we had seen. The temple is a project of one man and he has built it with his own money. It has been open since 1997 but he continues to add to it every year. As you walk across the bridge everything is white with silver inlays and when you walk inside the temple you are treated with murals of many colors. Here is the crazy part. Some of the murals have things you would expect but also in the paintings are modern icons like Spiderman, Ironman, Elvis Presley and Michael Jackson just to name a few. We were not allowed to take pictures inside. If you want to see the pictures you will have to do a quick google search on your own. 🙂 After taking lots of 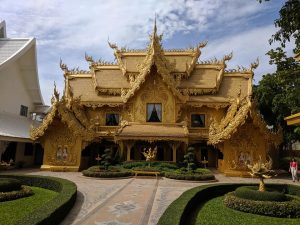 pictures we exited to the left only to see this huge gold building resembling a palace. But if you had three guesses what it was you would be wrong, wrong and wrong again! This beautiful golden palace was actually a restroom for the visitors. So of course I had to go use the bathroom to see more. It was just as fancy on the inside as it was on the outside. There were also many other temples and sights to see in the surrounding area. The only way I could truly describe this place is to say….White Temple = Mind Blown!

After several hours we decided to head back to our hotel. The only thing is none of us had thought to ask where to catch the bus back to town and it was not obvious at all. I looked up a blog that just said go stand on the highway and wave down any bus going to Chiang 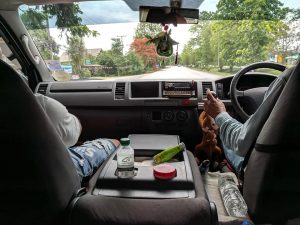 Mai so that is exactly what we did. After about 15 minutes of not seeing any buses heading our way a white van pulled up and opened the door. “Do you need a ride?” the driver said. Well yes as a matter of fact we do. How much?!?!? “20 Baht each” he said.  So we all jumped in an unmarked white van with our newest friends and headed back to town. (Now I have watched enough serial killer movies to know not to get in an unmarked white van especially 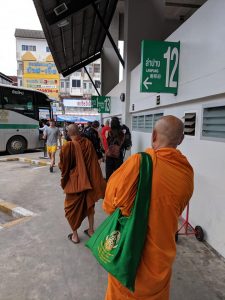 in another country but it was hot and we had places to be ha ha!) After dropping off a few other passengers along the way he brought us safely back to our bus station. A big thank you and shout out to Mr. Van driver!!!

We headed back to the hotel took showers and checked out. We decided to have lunch at a burger place and then went to catch our bus. This was a big bus with AC and doors that opened and closed. Luxury for sure. This bus would be our home for the next three hours as we headed to Chiang Mai our next destination. It was kind of cool seeing the country side but there was a lot of construction that turned our 3 hour trip into a little over 4 hours. At least we were comfy with our ac and snack. When we arrived at the bus station we used the Grab app and called a cab and for less than 3 US dollars we were brought directly to our hotel. Oh by the way this is the same hotel we stayed in last year. It is right in the middle of town 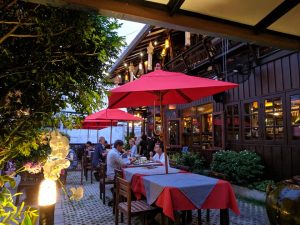 and close to most everything we like about Chiang Mai.

We decided to go to dinner at a place right around the corner called DASH. It was really good and we all had a great meal. Hmmm what to do next?!?!? Get a foot massage of course. There happened to be a place right next door to our hotel. So for 10 US dollars including tip we had great foot massages and then sleepily headed to our hotel rooms for the night. Love love love this place! Tomorrow we have no solid plans but will be out and about in one of our favorite cities Chiang Mai! Thanks for following along with us!

2 thoughts on “Finally the White Temple!”