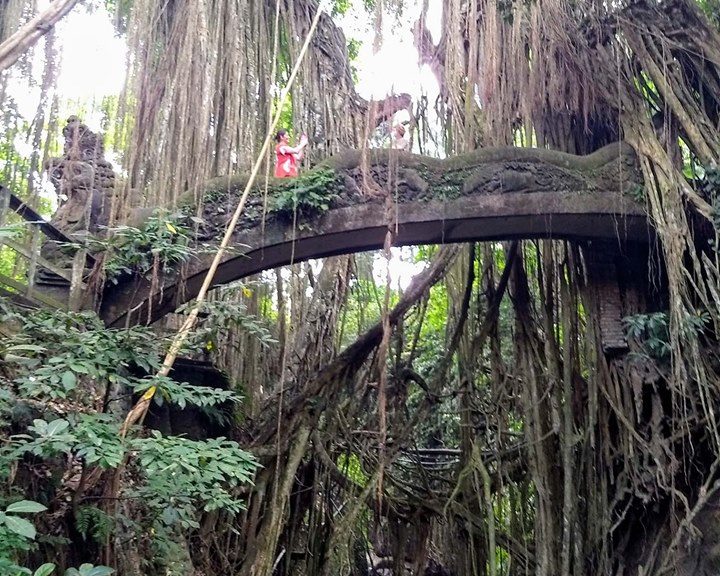 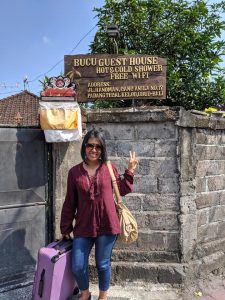 So finally our Cab pulled down a road so small he had to back his car up twice to get a straight line into it. He went down the super tight alley and at the end pulled up to a laundromat and said here you go. We have arrived. I looked again and saw the laundromat on one side and then a gate on the other side that looked more like a personal residence. Right next to the gate was a small sign that said Bucu Guest House! The sign even stated that we had hot and cold showers and free WiFi. Apparently our new Millionaire status comes with all kind of perks. The cab driver was true to his word and used the meter so our total bill was just over 250,000 Rupiah. That’s right it cost a quarter of a million for the cab ride here and that was the good price ha ha. We thanked the cab driver and headed through the gate and followed a few signs to the front desk. We already felt like we were seeing old temples just by the way it was decorated. The young man took us to our room and gave us all the information we needed to know where everything was. On our way to our room we truly felt like we were walking through an Oasis of beautiful plants and really cool looking pool. This hotel was $38 a night and had everything we needed and more.

time it was about 1PM and we decided we needed showers and a “quick” nap before we walked into town. So we laid down about 1:30 and the next thing we knew it was 3:30. Yikes! We got up straight away and headed into town. The first thing we noticed was how cool it was. It was in the 70’s with an expected low of 69 degrees. This felt crazy good as we were expecting high 90’s just about where ever we go this summer. The second thing we noticed is that Ubud has a really cool laid back vibe even though it is busy with tourist and crazy amounts of traffic. We even noticed that all of the dogs that were running around seemed to be well fed and very laid back. As we walked the streets there were shops, coffee shops and restaurants that had their own unique decorations. It felt like it had the vibe of being a slightly Up Scale, Hippie, laid back kind of town and around every corner there would be another cool street like the one we had just come from.

After walking around for several hours we decided to get dinner at one of the restaurants that looked cool and had a good crowd. We had 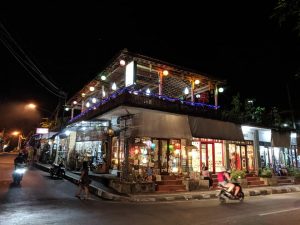 a small table looking over the street and we just spent the time enjoying each others company, watching all of the people going by and yes trying to stay awake. The time difference is 12 hours so it is a complete flip to our bodies. After dinner we had a nice stroll back to our room and finally went to bed around 10. It seems like it was forever ago that we were talking to the Uber driver in Raleigh when actually it was just a little over 48 hours ago. Anyway we both slept pretty good and just woke up a few times throughout the night. The next morning we woke up early around 6:30. Our hotel breakfast did not start until 8AM so we decided to go see if we could find a coffee shop and see if Ubud was waking up yet. When we stepped out of the door it was 70 and actually a little chilly. What a great way to start the day. 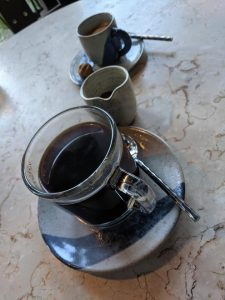 We found a coffee shop and had a couple of coffees to try to get our brains working and beat this thing called jet lag. After about an hour of watching all of the store owners opening their stores we headed back to our hotel for breakfast. The breakfast is served in an open air area right by the pool with coconut, banana and mango trees all around the property. What can I say………just beautiful. Oh yeah and the breakfast was included in the $38 a night rate. Remember that’s with hot and cold running showers! 🙂 About 9AM we headed off to one of the main attractions here called the Sacred Monkey Forest Sanctuary. It was just a 15 minute walk away. It was a pretty cool attraction and the monkeys are free to roam anywhere they want in fact they can leave anytime they want. The park is beautiful and it was really fun to see all of the monkeys up close especially the baby monkeys. These monkeys can be dangerous as they are use to humans and think nothing of 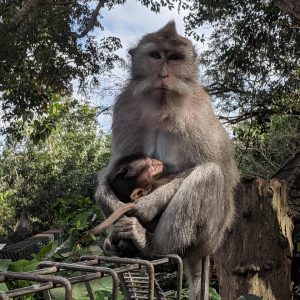 stealing food from you or even phones, sunglasses or whatever they can get their hands on. There are lots of warnings telling you what not to do. One warning I found hard to not do was a warning that said do not make direct eye contact with any of them because this could cause them to become aggressive. Let me just say…… do you have any idea how hard it is to look at monkeys and not make eye contact with them.?!?!? I found it to be impossible. I walked through the park locking eyes with monkey after monkey just waiting have the @#$% beat out of me. Luckily my stares did not seem to phase them one bit.

After that we headed for lunch in a little hole in the wall restaurant that I had heard about on one of the you tube channels that I follow called Int Affair. They are a couple that travel around the world and have great videos on what to do at each place they travel to. I am using several of their ideas on this trip. One thing they preach is trying local food and one of 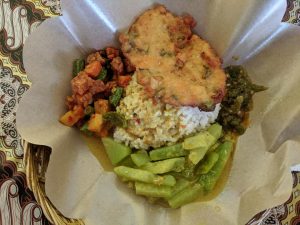 the places they said they loved was called Warung Jawa Timur Bondowoso. It was a little hole in the wall that mainly locals eat at. We went there and had a great meal. We loved the simplicity of it. They start with rice and then they just have things added to it like fish, chicken, vegetables, gravy, ect… Both of our meals together was just under 4 dollars total and that was with two waters and a snack to go. Lyn said it reminded her of eating in the Philippines. Yummers!

After that we walked around town and headed for the markets. The markets were huge and included every touristy thing you can think of. It was interesting to look at but it did not take 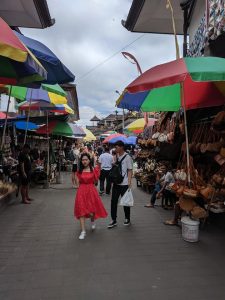 long to feel like you were seeing the same things over and over again so we headed back for a nap at the hotel. This time we just took a 1 hour nap and headed back out for dinner. There is a strip of restaurants around the corner from our hotel. We ended up at the Barking Puppies. (No they did not serve dogs for dinner but they did have decorations of dogs everywhere.) We got a balcony seat and really enjoyed just watching life go by in this cool town. Finally we walked back home and called it a night around 10PM.