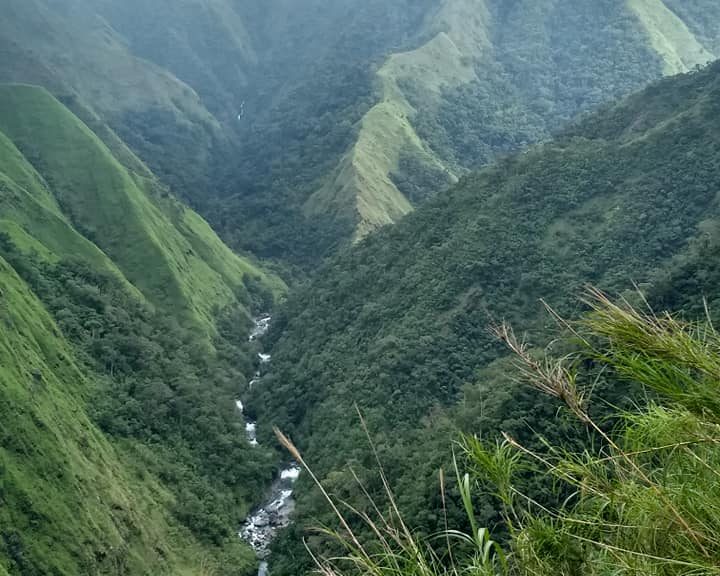 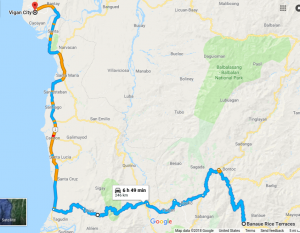 So today was the day we would be going to Vigan and crossing through the Bessang Pass. We had hired a private car the night before. There was really no realistic way to get there the way I wanted to do it without getting one. If we did Jeepney rides we would need 6 transfers and the possibility of making it in one day would be very small due to the Jeepney schedules. Even the driver that was taking us had not done it since March of 2017! Because of recent rains there was always the chance that a landslide would cause us to have to make a detour or worse yet back track. We decided to leave at 8 AM and hopefully that would put us in Vigan by 5 PM the same day. Everybody that I had talked to really had never heard of the Bessang Pass but from what I had read it would be like driving through one of our national parks but without the crowds. The driver showed up a few minutes before 8 with his back up driver his son. He spoke very good english and also spoke Lyn’s local language 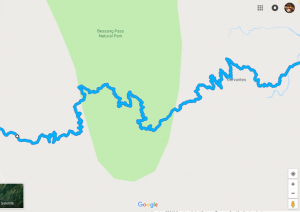 Ilokano. He said he was going to take his time to be safe and also would stop wherever we wanted to let us see this beautiful place and of course take pictures. We were hoping that by leaving at 8 we would have clear skies at least for the first half of the day.

As we headed out-of-town we instantly started climbing up very curvy roads. This was going to be a roller coaster ride the entire way. I was not prepared for how beautiful the ride would be all the way to the Bessang Pass and we really enjoyed the views and of course stopped along the way to get out, take pictures and just take it all in. About 20 minutes in we 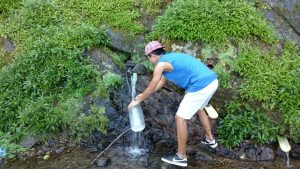 stopped at the side of a road where fresh mountain water was coming off the mountain. We stopped and the driver and his son filled up two large containers to take back to their house. Apparently this was one of the places that locals would come to get fresh water.  We not only stopped at overlooks we also stopped at little towns along the way to go to the bathroom or get drinks and snacks. Most of these towns where on very steep hills and would be very small. We could not imagine how anybody that lived here would have to climb up or down the mountain on these curvy roads to go anywhere. You can watch a short video of our trip by clicking here. We all agreed that getting the private car was so nice so we could see and stop whenever and wherever we 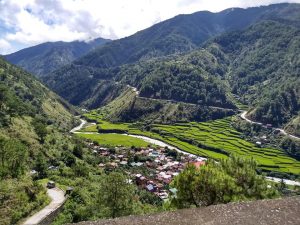 wanted to. As we went along we saw many small land slides. For the most part they had at least one lane cleaned up so we just drove around them. Occasionally they had to be driven over. I would have to say that overall the roads where better than we thought but better as a relative term. You can see a short video of our trip along these roads by clicking here. Some parts of the road where in such a condition that in the USA they would probably be closed. Since this road is one of so few the people and drivers just worked with it and made it work. Finally around 1 PM we entered the Bessang Pass.

The Bessang Pass played a very important role in WWll. It was one of the last strongholds in the Philippines by the Japanese. The Battle of the Bessang Pass started January 8th 1945 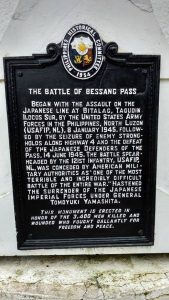 and continued through June 15th 1955. It was led by American forces with over 12,000 Filipino soldiers. They had over 3,375 casualties during this time and as you go through the park you can see how hard it must have been to advance with all of this mountainous terrain. The park was beautiful at every turn. It had small picnic areas and overlooks and it also had one other thing that was nice. Almost no other people. We made our first stop and in 20 minutes I counted only four cars going by. After stopping at a few overlooks to get pictures we stopped at the memorial for the battle. They had a little building where you could sign a visitor book and even though it was after 1 PM there were only about 10 signatures for the day. I felt honored to actually put Lyn and my name in the book. We took several pictures at the monument and just reflected on what a feat this must have been. Finally as we were reaching the top and actually heading into the clouds our visibility went away and it felt like it was about to rain. However as we started to head down we started coming out of the clouds our visibility started to come back. We came around a corner and noticed 4 people out of their vehicles taking in the views. We decided to stop and see what all the fuss was about and instantly could see what they had stopped for. We could see really far with the 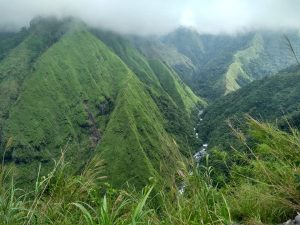 clouds only covering the tops of the mountain peaks. I remember saying that it seemed like we were on a movie set because the greens where so green and in the distance you could see water falls that went the length of the mountains. Even  our driver and his son where taking pictures. I felt like if King Kong was real he would surely live right over the top of these mountains ha ha! We stayed here for about 20 minutes and just took it all in. It was wonderful. You can see a short video by clicking here. Now that we had crossed the highest peak we would be going mostly downhill. I was so glad that we had gotten this far without any major incidents. We kept going down and down and finally that nice cool air we had been enjoying all day was getting warmer and the humidity started kicking back in. Finally we reached the National Highway that would take us North to Vigan. After about an hour we stopped at Jollibee for a very late well deserved lunch. After lunch we headed north and about 5 PM we made it to the town of Vigan. Our hotel was right in the middle of Vigan on the famous street of Calle Crisologo. This street is closed to traffic and it was kind of hard to find a place near it to park. Finally we just pulled over about a block away and said a rushed good-bye to our awesome drivers. 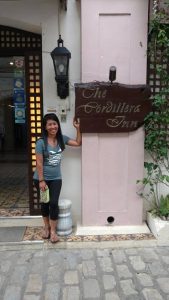 We walked about a block to our hotel. It was called the Cordillera Inn and was right on the famous Calle Crisologo street. Vigan is a UNESCO World Heritage Site and on the west coast of the Northern Luzon. It originates from a time during Spanish colonization. So it has a unique old world spanish vibe with Filipino influences as well. One of the most preserved areas is Calle Crisologo street. It is closed to traffic and is really beautiful. This area is a high tourist area but mostly the tourist are Filipinos. I think I only saw about 4 westerners the entire time I was there. Anyway we checked in and within minutes we were taken to our room. This room was called a family suite and had three beds as well as a nice bathroom. The hotel had an old world feel but we did have air-conditioning and they included breakfast. The funny thing just like the hotel before we had to order our breakfast the night before. I guess this helps them be organized but it does seem strange. Anyway Lyn’s sisters were tired so they took a nap while we went out and explored a little bit. It was beautiful but after about an hour it was time for dinner and we went back to the hotel to get Lyn’s sisters. By this time it had finally started to rain. The hotel supplied us with umbrellas so we headed out and got a quick bite to eat and called it a night. Tomorrow we plan to check out the town of Vigan and see just what it has to offer. Thanks for reading!