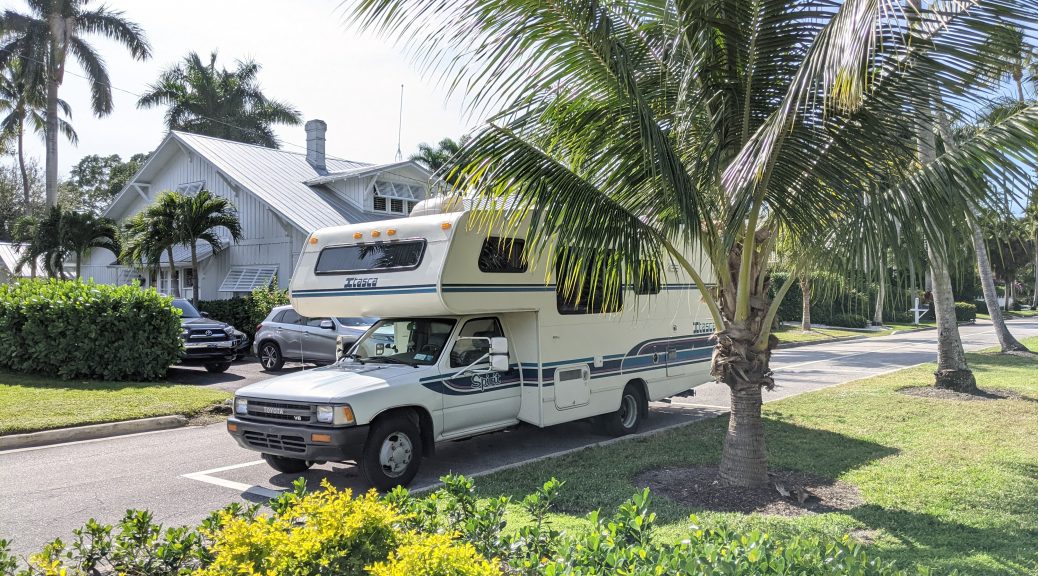 So as some of you know Lyn, Jasper and I have decided to take a Gap year and take a year off from work. (Jasper is actually on a Gap decade and has been waiting for us to join him.) We bought an old Toyota Motorhome last summer and are now living in it full-time. Can you say tiny house? We sure can! Our RV is 21 feet long and and was made by Winnebago/Itasca 28 years ago. Yikes!!! Lyn fits in this RV like a it was made for her and I fit into it more like Shrek ha ha. Even Jasper has had to get use to turning around in the RV. Actually we have a lot of room and I can stand up straight but I tend to hit my head on about every place possible. We have camped across the USA three times in our Prius in a pop-up camper and loved it but we always wanted to try a motorhome. We liked the idea of our RV being built on a normal Toyota pick-up truck as it would be easy to get repaired. Anyway we sold our house in November then trashed, stored, sold and gave away all of our belongings. All of this was done in about four weeks time. Our plan is to see as many National Parks, State Parks and other great areas that this country has to offer. Our initial plan is to head south through Florida down to the Everglades National Park and head back up the gulf and follow it around to Texas and ultimately on to Big Bend National Park. By then we will have planned the next leg. The fun part is that this is a general plan and can be changed at any point and time!

On Christmas Day after all of our virtual Christmas festivities were done we headed south to our first stop just a little below Hilton Head at a Cracker Barrel off of I-95. We had heard that you could spend the night at most Cracker Barrels and so that is exactly what we did. It is very nice having an RV and especially when you live in one full time. No matter where you are you always have all of your stuff with you! 🙂 After waking up the next morning next to several other RV’s we realized two things. That we were safe and that this was real…… we were really doing this! Kind of exciting and and a little nerve wracking all rolled into one.

Right away we learned that getting state sponsored campgrounds was going to be harder than anticipated. Everywhere we turned they were full and they no longer saved sites for first come first serve customers. Our second day we spent the day in Charleston and headed back to a another Cracker Barrel. Finally we got a reservation at a KOA and we had some time to sort things out. As you can imagine we have stuff everywhere. Like most people we brought too much. Day by day we are getting more organized. Once we got going, we started making reservations and we ended up staying in two KOA’s and then on to Disney for three nights. We did not even go to the parks we just enjoyed the campground. It was $70 a night which is one of their cheaper rates but it was very nice and complete with heated pool and a hot tub! After Disney we headed to the Everglades National Park and on to John Pennekamp State Park in Key Largo! Both of these were beautiful and we would return to either one in a heart beat.

While at Key largo I started reading about an app called I Overlander. It has people review places that you can camp and lot of the campsites are free. We decided to give it a try and the next night we stayed in a beach access parking lot in Miami Beach about 30 yards from the ocean for free. We liked the freedom and the price and ended up spending the next 5 nights for free at places that people had reviewed on this app. This was awesome because it would allow us to mix in free nights with $40 to $70 campgrounds nights so our average nightly expenses would be much less. Some of these free places ended up being nicer than the sites we paid for at a campground. Staying at these free places is called Boondocking which means that you have no electricity, water or any other amenities. You need to be self reliant. That is where our RV shines. We have a bathroom, gas stove, gas/electric fridge, gas heater and water with a pump. The living area called the”Coach” is powered by its own battery so we can use the lights, cook and even eat ice cream out of the freezer. (This practice needs to stop btw.) 🙂 The battery for the living area is recharged by the Toyota truck while we drive along. It really makes us self reliant.

After spending six nights Boondocking at outrageously beautiful sites up the Gulf side of Florida we needed to get a campsite so we could dump all of our tanks and add fresh water. It would also be nice to relax by a fire and take warm showers at a campground. We do have a shower in the RV but taking one while Boondocking would take too much water. Now I know what you are thinking…..six days without a shower…….yuck. Well we also have a membership to Planet Fitness so during these Boondocking days we stop by there and grab a nice hot shower.

For the last few days we have been staying at Fort Pickens National Park in their campground and enjoying this unusual National Park and all of its beauty. Lots of interesting history as well! Tomorrow we are Boondocking at a Brewery near Biloxi Mississippi. There will be no electricity or water but there will be beer so we will be living the good life ha ha. I will try to write a blog at least once a week and am hoping to add a YouTube channel soon. As usual thanks for reading! If you want to get a notification when we post a new blog post please sign up with your email. Feel free to comment below if you have anything to add as usual on these trips we have no idea what we are doing but we are having a lot of fun doing it.