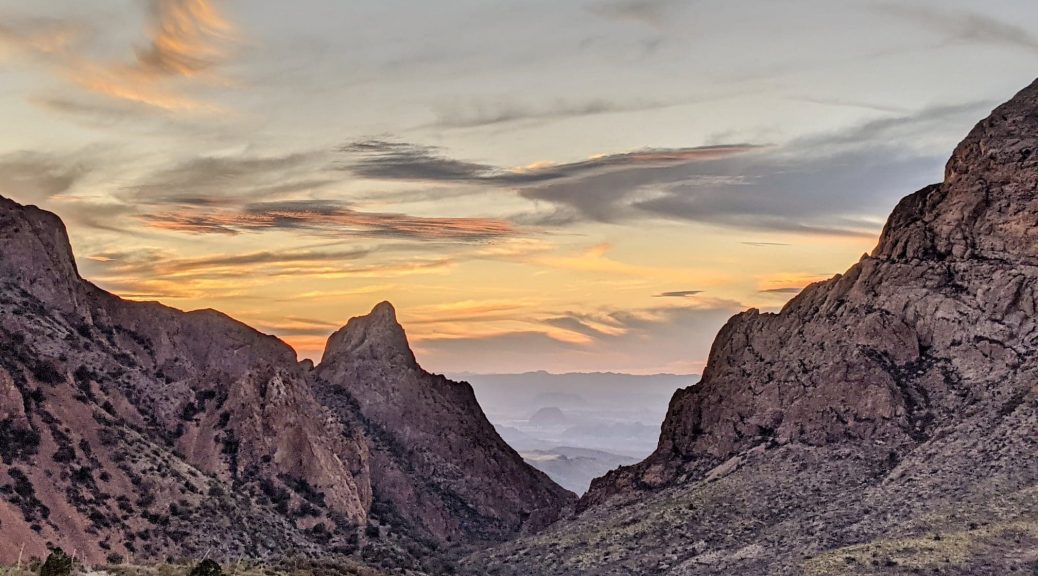 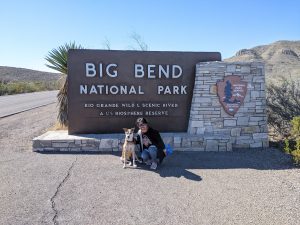 Well, finally we arrived and after taking several pictures at the Big Bend sign we headed in. Its another 60 miles or so in to get to the visitor center so we had plenty of time to take it all in. It is beautiful in every way. Lots of dessert, rock formations and the closer you get, the Mountains of Big Bend just get bigger and bigger in your windshield. They had several pull overs but we kept going and just enjoying the ride. We saw several signs stating that there were bears, mountain lions, javelinas (More on these later), and road runners. I will have to admit it does look like this may be the exact spot where all the Road Runner Wylie Coyote cartoons were filmed. 🙂 Finally in about an hour and a half we arrived at Panther Junction visitor Center. We pulled in and I went to talk to the ranger and get some information and Lyn went to get her National Park Passport book stamped. After that we went and sat in the RV for a bit to catch up on all internet related stuff. (The visitor center had super fast wifi.) The entire day we had been in and out of cell coverage and  it was nice to have a steady connection to get a few things done.

I do not like to make reservations ahead of time but the campgrounds are super busy now and they are hard to get. Some of that is due to the increase popularity in RV’s and the other is due to the fact that most campgrounds have some of their campground sites closed to keep the numbers down due to Covid. All campsites at Big Bend were fully booked. Anyway every day for the last 4 days I checked the website multiple times and finally was able to get all four nights booked. We would be staying at three different campgrounds. Chisos Basin $16 a night, Croton $10 a night (Back Country) and Rio Grande RV Park $35 a night. Our first night would be at Chisos Basin. The Campground is at 5,400 feet elevation so our RV was about to do a little work to get us there. We weigh somewhere around 6000 lbs so its a lot to all up the mountains. The Visitor center is around 2,599 elevation. We went about three miles down the road and then turned left to go to Chisos Basin. It did not take long before we started to climb. Luckily no one was behind us so we just took our time. Turn after turn the views just got prettier and prettier. Finally we arrived at the road to the campground. It was about a mile long downhill to the basin. We had a beautiful site with beautiful views but it was a very downhill space. I was able to level it some with our leveling blocks but we were still not that level. Anyway it was only for one night. The trail that went to the Visitor center was literally right behind our campsite.

We hiked up to the Visitor center and just took in all of the great sites. As soon as the sun went down it started to get cold. The low was going to be around 30. These campgrounds have no electricity or water. Luckily we do have a gas heater that runs off of our LP tank. We usually go to bed with it off and around 3 am we turn it on to have everything warm in the morning. We cover Jasper up with blankets but he quickly gets out from under them. He seems fine without them. Anyway we woke up to a beautiful sunrise. Our next campground was at the Rio Grande RV Park. It was in another area and would have full hook-ups. It was about 30 miles past Panther Junction Visitor center. We stopped at Panther Junction to make a few phone calls and catch up on the internet. It really is awesome to be able to do all of that from the comfort of our House Car. After about an hour we drove to our next campground. It was beautiful the entire way and we pulled over multiple times just to take it all in. Anyway we arrived at the park and while the area was beautiful the campground is really a big parking lot where mostly campers with very big campers camp. It does have full hookups and they also had a laundromat so we were actually sitting pretty good in this parking lot. The electric bike was awesome here. The area was flat and the bike really allowed us to explore and even park at a few trail heads to go for short hikes. When we got back the sun was going down and it started to get Chilly. We sat outside for a bit and then headed in for the night. Since we had electricity we used our space heater to stay warm all night long.

The next morning we had a big driving day planed. We were going to do the Ross Maxwell Scenic Drive that was about 30 miles long. 14 of those miles would be on “improved” dirt roads. So we drove the 30 miles back to Panther Junction Visitor Center and used their Internet for about an hour before heading out. The drive was beautiful and had so many overlooks and small trails to go on. We walked on several of them and could see the remnants of old ranches and other evidence that people had once lived there. It was beautiful. We stopped for lunch along the way and had Ramen noodles and of course Lyn made them extra special. After driving about half way we toured the Cottonwood Campground and  stopped at the Castolon Visitor center. It was really rustic and interesting. It was origianally built as a calvary camp and later was the headquarters for the Harmonia Company. There was a recent fire that had damaged some of the buildings but it was still unique and interesting. After we left there we drove to the Santa Elena Canyon. It was beautiful and it was created by the Rio Grande River. In fact the left wall is in Mexico while the right wall is in Texas. After taking pictures we headed to the last part of our trip. It was called the Old Maverick Road. This is that 14 mile “improved” dirt road that I was talking about earlier. I had talked to the Ranger before we left and she said it was in pretty good shape due to the dry weather. She said we could make it but it would shake our RV. Of course all I heard was that we could make it so we headed off. We got a mile in and that’s when we hit the washboard part of the dirt road. No matter how slow we went the entire RV shook. It was making so much racket that I told Lyn that some of her pots and pans may change sides during this drive. 😂

It got to the point where even 5 MPH was too fast. So this 14 miles was going to take almost three hours. We kept going on and it was beautiful in just about every way. We could really taking it all in since we were almost going walking speed. Occasionally  a jeep or dirt bike would pass us but we did not see another car or RV the entire trip. We pushed on and after awhile it got to be almost funny as we recalculated over and over again how much farther we had. It was always the same…….a long long way! Finally we just accepted it and became one with it. We knew that even if we broke down we had our entire house with us and the temperatures where great. Anyway we kept going and about 5:30 we finally got back on a real road. We were about 12 miles from our next campsite at Croton.

This was going to be our first back country campsite. It even came with instructions to bury your poop at least 6 inches deep and away from your campsite. Ha ha! Once we arrived at the exit we had to drive down a rocky road for about a mile. We arrived to a big open area with two big sites. One person was already there. We pulled in and set up. It was so cool. You could see really far in every direction. Now it was out here that we might see some wildlife since we were camping right in their area. We had seen lots of roadrunners literally running around everywhere. They can run up to 16 MPH and it is said they can fly but they prefer to run. Not quit sure what would have to go down to make a road runner fly but all we saw them doing was walking and running. Almost no-one is likely to see a mountain lion (Thanks goodness!)and the bears are not hibernating but they are in a relaxed mood due to the time of year and are not moving around much. But believe it or not it was the Javelinas that we had learned could be our biggest problem out here. I had never heard of them before. They are bigger than guinnie pigs and smaller than most regular pigs. But here is the crazy part they travel in bands of 12 to 24 looking for vegetables and fruit to eat as they do not eat meat. But apparently they have been known to be vicious and actually attack dogs and people to get food. They have even killed a few people and dogs just to get what they want. So here we are trying to settle in for the night waiting for that sneaky little knock at the door only to find a band of Javelinas ready to attack us for our fruits and vegetables. Luckily the night was quiet and we awoke to a beautiful sunrise.

Today we were headed back to Chisos Basin and as luck would have it we ended up with a beautiful level campsite that looked out over the basin.  It really was one of the most beautiful campsites we have had so far. We happened to be across from the camp host who was a retired teacher. She volunteered 32 hours a week for 3 months at a time. While she was not paid for this she did get a free place to stay and all of her electricity and LP were paid for. I could see doing that for a few months here and there. Hmmmm something to think about. Anyway the last time we were here we missed a great sunset opportunity so we decided to walk the Window View Trail. It was about 1 mile hike from our campsite and worth every step. The next morning we left our campsite and headed out of Great Bend. Our next stop is Guadalupe National Park. We absolutely loved Big Bend National Park. Definitely hope to return soon with family and friends. As usual thanks for coming along. 🌵✌️