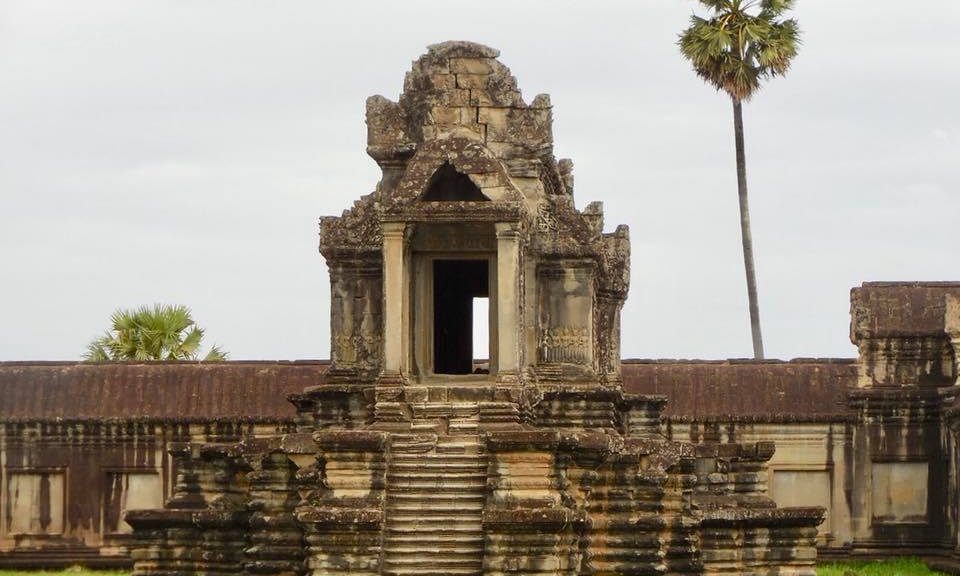 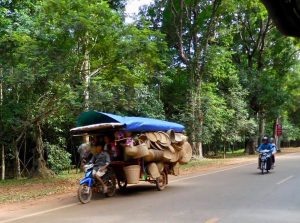 So today was going to be special. We were finally going to see Angkor Wat! As stated yesterday it is a temple complex just outside of Siem Reap and is the largest religious monument in the world. If you come to Siem Reap you are going to Angkor Wat. It is not cheap either. It was $37.50 each. That does include three temple areas. You can hardly blame them on the price as part of the proceeds helps to go to maintain the temples. It’s about 5 miles out-of-town and you have to go buy a ticket at the ticket center first. We asked our driver Sophy Toun to pick us up at 8 AM. A lot of people get up early and go see the sunrise but getting up that early never crossed our minds. Ha Ha! We had breakfast at the hotel which was included in the price. Because the hotel had so few guests they did not do a buffet but instead offered you a cook to order breakfast. It was actually pretty good and we got to eat it on the covered veranda looking over the street. Awesome!

A little before 8 our driver arrived and by 8:15 we were off. Although we have somewhat gotten use to the scenery and routine by now 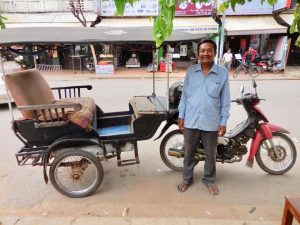 I think all of us just smile at the sights and sounds that only a Tuk Tuk ride will bring. We took a few pictures and after about 20 minutes we were buying tickets. They are serious about the tickets and actually print your picture on the ticket so you cannot resell or have someone else use your ticket. After that we road another 20 minutes and we were there. Our driver showed us where he would wait and the told us a few facts and helpful hints about the place. As we walked towards the bridge to go to the actual Temple at Angkor Wat Julie’s Croc sandals broke! This pair of sandals have caused her nothing but trouble since we got here. Even though she has had them a year and always thought of them as comfortable they have given her many blisters on this trip from pretty much from day one. Strange?!?! She has bought several boxes of band aids. So her routine was to strategically place the band-aids 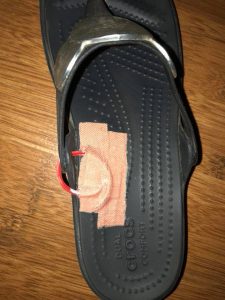 before we headed out. If we happened to get a massage while we were out then all band-aids came off and new ones were applied again. Then as band-aids ran low a 7 eleven was found and more were purchased. This scene was played out over and over again because you could only buy very small boxes of band-aids at 7 eleven. Well on this day right before we crossed a bridge one of the straps on Julie’s shoes actually came loose. It turns out that the side strap was only glued and maybe the Cambodian heat had melted the glue we are not so sure but it was not good timing. At Angkor Wat you are going to do some walking so this was bad timing for sure. After we walked across the bridge it was apparent that Julie’s shoe was not going to make it. Lyn looked at and decided that she could try to fix it. They found an old skewer that was lying on the ground and then Lyn punched holes in the two pieces. Then Lyn found a small piece of plastic that look like it came off a bottle. Julie looked at it and thought it would work and between the two of them they worked out a system fix that actually held up for our entire walk. 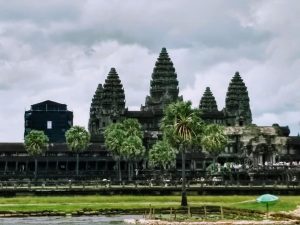 detail. Almost every stone had intricate carvings on them. How I would love to see this place in its orignal grandeur. It really was cool to imagine the people who originally lived here and envision how life must have been. The cool part is you are actually allowed to climb all over it. There a few parts off-limits but as a general rule you can go just about anywhere. We climbed and walked and checked out all of the rooms and different parts of the temple.Finally we came across a monk that was blessing people. Julie decided to be blessed and the Monk tied a string bracelet while doing some kind of chant. He then blessed Julie with some type of holy water. If you want to see a video of this you can click here. Eventually after about three hours we were worn out. We all had decided to call it a day and not go see the other temples. The fact that we wanted to quit in no way reflects on 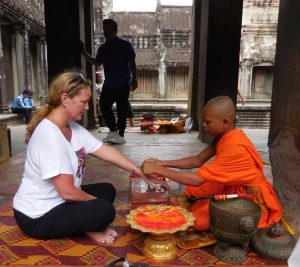 these great temples it reflects more on our out of shapedness and the heat. Anyway I guess you know by now that we are all coming back to this beautiful place so we will see the other temples then. We finally made our way back to our driver and he was very surprised that we were templed out but agreed to take us back to Pub Street so we could get lunch. In short order we went to a place with AC and had a great lunch for about $5 each. After that we caught a quick Tuk Tuk home and everyone took a nap and just relaxed till dinner time. The heat over here has slowed us down but it has not kept us from having lots of fun. 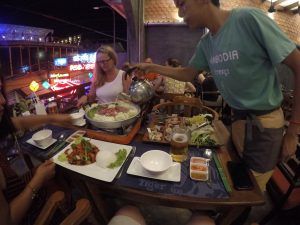 After naps we caught another Tuk Tuk back down to Pub Street and went back to Easy Speaking for dinner. I had seen the BBQ that they had and wanted to try it. Some people call these Korean BBQ, Hot Pot or Steamboat but what ever you call it…….it is delicious! We ordered one for two people and got a few other items to go with it. When you order this they bring out a gas burner that has a pot on it. The pot can hold liquids and vegetables around the bottom and then in the middle it it has a mound that is a grill for your meat. So to get us started they brought out all the meat and vegetables. The waiter poured either a water or a broth in the base, added some of the vegetables and then put butter all over the grill part and 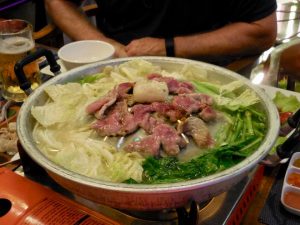 added a piece of fat back to the top of the grill. Next we added meat and it would grill on top and the juices would flow down into the broth and vegetables. The meat was beef, chicken, crocodile, pork, frog and fish. It was all delicious and the broth was super yummy as it had all the favors in it. If you want to see this style of cooking in action click here. I am telling you this was fun and we will be having one of these at our house when we get back. After that we went shopping and then finally we went home for the night. Tomorrow we will travel to Bangkok. We have one day there before Julie heads home and Lyn and I head to Singapore. We are all holding up well and looking forward to each day. As usual thanks for reading!